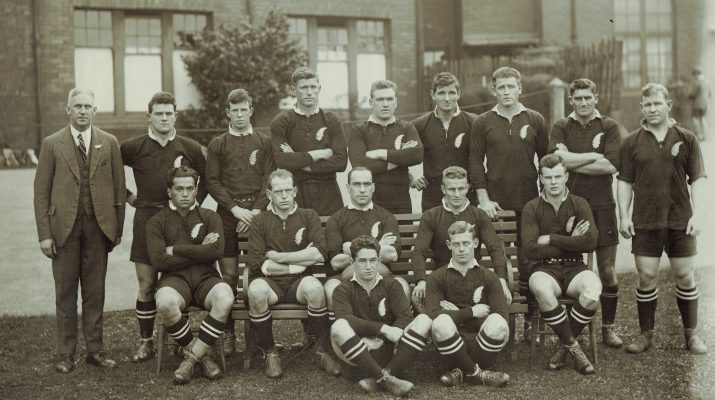 Recently the club has been in contact with Adam Gilshnan, a New Zealand based rugby supporter who has been investigating some interesting stories concerning our game against the 1924 visiting All Blacks.

There follows a wonderful story about a young Newport lad and his experiences that day, the gift to him of a rugby legends match jersey and its destruction in the WW2 bombing of Newport. A fascinating story:

When the 1924-25 All Blacks snuck a last gasp 13-10 victory against Newport at the Rodney Parade ground in Wales, they’d have been mightily relieved not to only have won, but to have kept up their 100%-win record, six games in to their 32-game tour of the United Kingdom, Ireland, France and Canada. The team would of course go on to win all matches on their tour and be dubbed ‘The Invincibles’.

In the match, it took a 79th minute try to winger, Kenneth ‘Snowy’ Svenson to snatch the lead, with Mark Nicholls converting from a difficult angle, to seal the stunning come from behind victory.

Sadly, for 10-year-old Welsh lad Bill Slade who was watching on among a crowd of close to 30,000, the emotional pain of seeing his side losing in such a dramatic climax, would not be the only pain he’d suffer that October 2nd day in 1924. A letter sent to All Black manager John Sturgeon at the 1991 Rugby World Cup, by a then 78-year-old Bill Slade, recounts the story of his ‘painful’, yet happy encounter, with the All Black fullback that day, the incomparable, George Nepia.

“I was watching the All Blacks play Newport, at Newport, when he (Nepia) kicked the ball into touch, and me standing by the railings, it caught me full in the face and as it was pouring down with rain, the ball was heavy, it gave me a black eye and a nose bleed but he came over and said how sorry he was, he said to come to the dressing room after the match, where he gave me a football jersey, but sorry to say I lost it when the house was bombed during the war”. “He has always been my hero ever since, as I say, I am 78, but still think he’s the greatest, so please beat England for me and George’s sake”.

Sturgeon’s All Blacks happily obliged to Slade’s request, beating England 18-12, in the opening game of the 1991 Rugby World Cup tournament.

Upon being contacted about the letter, Bills son Ken, who lives in the West Midlands, said he was delighted to hear that his father had written to John Sturgeon, and that the letter had answered some questions for their family. “I remember Dad telling my brother and I years ago when we were at school about Nepia giving him the jersey, which I recall Dad saying was the one Nepia wore in the Newport match”.

“Our family had no idea as to what had happened to it, so while it’s sad to hear how it was lost when Dads house was destroyed in Newport during the war, at least we now know”. “Granny Slade said nothing at all could be saved from the ruins of the house, which was a real shame”, Slade said.

“At school, Dad was taught by Newport, Welsh and British Lions representative, Vincent Griffiths, so he was always very passionate about Welsh rugby from a very young age, so it’s no surprise that he asked Sturgeon for his All Blacks to please beat England”. Slade said his Dad would speak of the personal pride he had when he played for the Newport under 25 team way back when, and that it was fantastic that despite his passing away in 2003 aged 90, his Dad’s story can now be told about his encounter with George Nepia in Newport all those years ago.

Incidentally, John Sturgeon’s 1989 All Black team also played Newport at the same venue as the 1924 game, and prior to the game, he unveiled a plaque marking the occasion that also featured his name, for a new concrete terrace that was opened for the Newport v All Blacks game in October 1989.

The embankment having since been replaced by a new grandstand at the Rodney Parade ground. 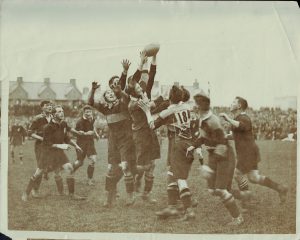 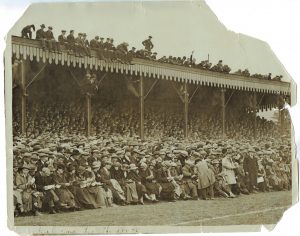 A packed out crowd use every vantage point. (Pic – NZ Rugby Museum) 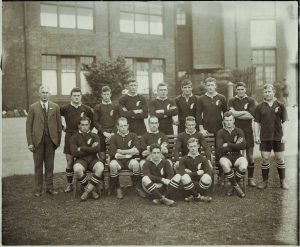 The All Blacks team before their game against Newport in 1924. (Pic – NZ Rugby Museum)