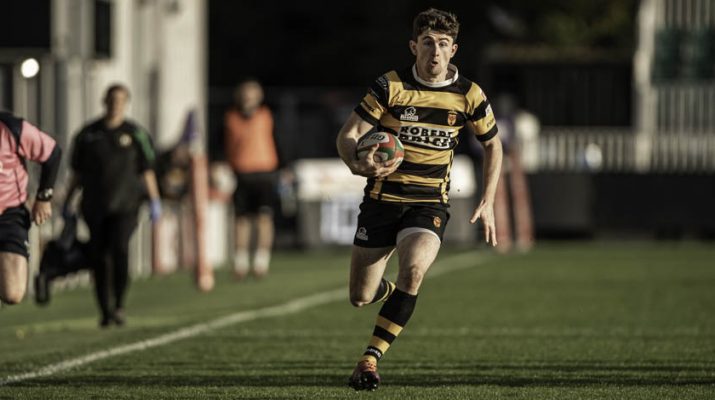 The next round of Indigo premiership games was soon upon us. Newport RFC were lucky to escape the very worst of the wet weather which put paid to much sport in the area on the Saturday, when rains of biblical proportions descended on south Wales. Instead, with the clocks having gone back an hour, we were treated to a beautiful, cloudless autumn afternoon. Perfect rugby weather.

Merthyr haven’t had things all their own way this season. Their summer recruitment was understated while their talismanic head coach, Dale McIntosh was seconded into the coaching team for the Namibian national side at the Rugby World Cup in Japan. But now that the ‘Chief’ was back, one could expect the Ironmen to return to form and play in their usual style.

Newport head coach Ty Morris shuffled the pack again. With a number of injuries and player unavailability being an issue, Newport moved Matt O’Brien one jersey along and played him at inside centre with Haydn Simons starting at 10 while Elliot Frewen filled in at fullback.

Following a minutes silence for Black and Ambers who are no longer with us, Haydn Simons kicked off with Newport attacking the school end. Merthyr, playing in a change strip of white shirts and shorts and green socks, returned the ball and, following a little to-ing and fro-ing with kicks, Newport gained a lineout. Dan Partridge took the ball in the middle of the line allowing Newport the opportunity to try to kick for position. Both teams continued to feel each other out and look for weaknesses with a little aerial tennis. Newport made a surge into the visitor’s 22 metre area but were turned over at a ruck. Newport were penalised at a scrum so The Ironmen opted to go for touch. It was pretty predictable, but a whole lot harder to stop, when centre Harley Thompson bludgeoned his way through the Black and Amber defence to open the scoring. Fullback Matthew Jarvis added the conversion to make the score Newport 0 Merthyr 7 on 8 minutes.

Scrum followed scrum as passes went to ground, runners over-ran their support lines or myriad other technical infringements. Scrums stayed up, scrums went down, penalties were given and reversed. Newport did make one fantastic effort as Louis Jones, selected to start against the team that he left in the summer, along with fit again Tom Piper and Henry Palmer at hooker, gave the Ironmen a good going over at a set piece. Matt O’Brien found space to dance and the talented Newport backs put in some sparkling handling until a pass went forward and brought the move to a halt.

Merthyr had a positive scrum of their own minutes later and play surged towards the Newport 22 metre line. Matthew Jarvis threatened to break through for Merthyr but was brought down. Merthyr pushed forward and, despite hard-tackling and valiant efforts, visiting captain Craig Locke crossed for a 14th minute try which Matthew Jarvis again converted. This made the score Newport 0 Merthyr 14.

Clearly stung into a response Newport tried upping the work rate. Haydn Simons put in an effective kick-chase but Merthyr clung onto possession until they coughed up a penalty. Newport nursed the touchline trying to initiate a catch and drive, something of an Achilles heel for the team so far this season, and, true to form, the white shirts of the Ironmen turned Newport over and cleared. This, however, provoked a response as Elliot Frewen and Harry Griffiths in the centre for Newport, worked in unison along the pitch to get Newport back into attacking territory. A terrific break from Elliot Frewen tore Merthyr in two and, following some deft handling, Haydn Simons crossed for a super try to open the Black and Amber scoring. Matt O’Brien added the conversion to make the score Newport 7 Merthyr 14 on 18 minutes.

The scrums continued unabated as forward pass followed knock on as sure as night follows day. Newport did appear to be gaining some cohesion when the ball could get away from set pieces. Equally, in defence, the grittiness was returning and tackled players were staying tackled. Merthyr scrum half Justin James tried a cheeky break from the back of a scrum on 25 minutes just to find that Josh Skinner had turned, chased, caught him and dragged him into touch without too much damage being done.

Newport were the beneficiaries of a 28th minute penalty decision when Merthyr were judged to have pulled down a line out. Matt O’Brien stepped forward and that shot, sailing end over end between the uprights, took Matt to 800 points scored in a Newport jersey, a terrific achievement. The score now was Newport 10 Merthyr 14.

The game started to bog down in the middle third as Newport were awarded penalties that they could do little with then Merthyr were awarded a penalty which they would invariably knock on or concede a penalty of their own. As Merthyr did such a thing, by going off their feet at a ruck, Newport tried to explode out of defence running left in front of the Bisley stand. A Merthyr hand knocked the ball down as the defender tried to make a tackle eliciting just a penalty but Newport couldn’t make the breakthrough needed once they were in the visitor’s 22.

There was time for a last penalty shot for the half by Merthyr after Newport had entered a ruck illegally. Matthew Jarvis kicked his team further ahead making the score Newport 10 Merthyr 17 at half time.

Merthyr outside half Rhys Jones kicked off the second half, Newport’s Dan Partridge taking the catch and setting up a ruck. Newport kicked ahead allowing Jones to hoist a high kick back into the Newport half. Merthyr managed to retain possession but then hang on too long as Newport challenged for the ball. Matt O’Brien kicked Newport to the Bisley Side, around 30 metres out. The Black and Ambers worked the ball smartly across the field but, again, a promising move was halted when the support runner over ran Harry Griffiths’ pass and knocked on as he reached behind him to try to retrieve it. From the scrum Merthyr tried to go wide quickly but Griffiths was back in position to take Matthew Jarvis down. Kyle Tayler joined the tackle to attempt the turnover but the referee spotted something not to his liking and awarded Merthyr a penalty. They went towards the corner again and set up the rolling maul. Scrum half Justin James marshalled the melee until he brought wing Chris Czekaj, the former Wales international player, in on the angle. Czekaj was dealt with but Newport were offside. Merthyr opted for the corner and a well-drilled rolling maul had second row Ben Murphy heaved across the line for his side’s third try. The conversion hit the outside of the left post making the score Newport 10 Merthyr 22 on 47 minutes.

Newport were stung into some creativity. Matt O’Brien found space for Elliot Frewen to run into. Frewen and James McCarthy, on for Ryan Gardner and running in support of Frewen, punctured the white defence but they couldn’t read each other’s runs and the ball ended up going to ground. Newport retained possession but had slowed down allowing Merthyr to regroup somewhat. They, in turn, broke out of defence. Chris Czekaj cut Newport apart with a phalanx of support but his pass simply picked out Elliot Frewen and Newport could clear the danger.

A Merthyr error at a line out indirectly led to a Newport try on 57 minutes. Josh Reid, newly on for Kyle Tayler, stood strong in a tackle and made the ball available. Nice hands from Andrew Mann kept the move alive until Harry Griffiths and James McCarthy were in a two-on-one situation. However, Josh Skinner was fast striding up in support and it was the back-rower who took the pass and galloped across the line for a great try. Matt O’Brien added the conversion to make the score Newport 17 Merthyr 22.

Newport conceded a 61st minute penalty, Merthyr playing the advantage. The Ironmen kicked long reaching deep into the Newport 22. However, this wasn’t advantage enough for Mr Aled Evans, clearly, as he marched play back to the area of the offence and ordered Merthyr to try again. The Ironmen booted to the corner. Craig Locke biffed away at the defence while a pass out to Matthew Jarvis, which was spilled, was gleefully picked up by Harri Lang. Lang, who looked for all the world like he was about to turn on the afterburners, must have felt as deflated as the crowd when Mr Evans called him back for Newport offside. Merthyr then butchered this opportunity with a knock-on which let Newport off the hook.

The game became slightly bogged down again. An individual piece of excellence from Garin Price same the highly-rated back row affect a terrific turnover in midfield to restore possession to Newport. Aerial tennis resumed as time ebbed away. Llywarch ap Myrddin, on for Elliot Frewen, returned kicks with interest. Matt O’Brien made one promising break as he streaked through a gap in defence but Mr Evans said that he did so illegally, motioning for a pulled jersey. Rhys Jones took on the Ironmen’s kicking duties and must have wished he’d left it to Matthew Jarvis as the kick, some 27 metres out and directly in front of the posts, sailed harmlessly wide.

The game petered out for Newport. A 76th minute opportunity to attack from a lineout some 30 metres out was nullified as Merthyr got a hand to the throw in allowing Harry Davies to carry the ball away for the visitors. Newport eventually conceded a penalty which Merthyr, inevitably, kicked to the corner. The rolling maul was well controlled as it rumbled forward. Justin James could pick his moment as he controlled play and Merthyr ended the scoring just as they had begun it, Harley Thompson crash-balled his way through the middle and just about had enough momentum to scramble across the line for a try and the bonus point. Rhys Jones added the conversion to make the score Newport 17 Merthyr 29 on 79 minutes.

Newport went in search of a losing bonus point but found that impossible to come by on this occasion. Matt O’Brien conjured some moves up, Lewis Smout and Garin Harris combined as the ball reached James McCarthy on the wing. He was about to be enveloped by white shirts until he kicked ahead. Rhys Jones, the Merthyr 10, gathered and almost got steamrollered by Josh Skinner but the Ironmen could hang on as they kicked for touch to claim a deserved win.

Newport are next in Indigo Group Premiership action next Saturday when they travel to mid-Wales to take on Llandovery RFC. The Friends of Newport Rugby Trust are organising a bus for supporters. Tickets for the bus cost £15, the bus leaving from the Riverfront Theatre at 1130. Come along and support the Black and Ambers!