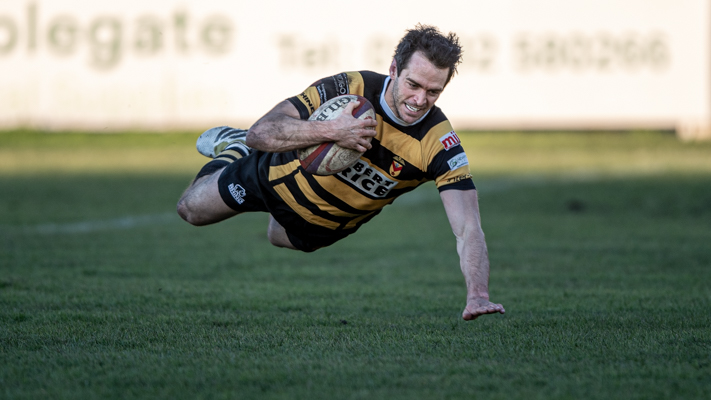 Many Newport supporters had been looking forward to this game following the re-introduction of the league and the East and West Conference teams starting to play each other again. Aberavon did well in their half of the cup competition, and it would be fascinating to see how this new, improved Newport RFC did against a proper, quality team.

It was a beautiful day in Port Talbot as the teams took the field at the Talbot Athletic Ground, unlike the dull, overcast conditions the Black and Ambers had left behind in Newport. Will Reed kicked off towards the mountain end, kicking out of the long shadows and into the sun. Both teams began to test each other out, Aberavon kick returning the ball. Dai Richards displayed his customary willingness to run in attack making alarm bells sound in the Wizards defence. A trip along the touchlines by Luke Crane and Matt O’Brien ended with a powerful counter-drive by the hosts, but they were soon pinged in attack as hooker Luke Davies instantly went off his feet at a tackle. A straightforward kickable penalty was taken by Will Reed to make the score Aberavon 0 Newport 3 on 4 minutes.

Aberavon put their faith in their pack on 6 minutes, turning down free kicks and penalties in order to scrummage. The Newport scrum was penalised by the referee, Mr Ben Whitehouse, on both occasions. When Aberavon ran it, Elliot Frewen flashed out of the line in defence, but Newport were penalised again. The Wizards went to the corner, second row Shay Smallman took the ball before setting up the rolling maul. Luke Davies, doing as the Hookers rule book states, latched onto the back of the rolling maul and claimed the try as the red and black shirts bundled over the line. Fullback Chris Banfield added the conversion to make the score Aberavon 7 Newport 3 on 8 minutes.

The two sets of forwards seemed very well matched at times, both showing the ability to hold attacks up, physically. However, it did appear that Aberavon did hold the edge at the scrum as their initial squeeze often had Newport all at sea.

Aberavon had a 21st minute opportunity to score following a knock-on in the Newport midfield. The Wizards backs laboured the ball across the line before centre Will Price dinked a kick behind Newport which was well covered but forced Newport into a touchline restart. Will Reed booted as long as he physically could, prompting Aberavon to respond. Their front row weren’t as sharp as passing as some and slowed their progress, but Luke Crane gave a penalty away by being a nuisance. Afon scrum half Rhodri Cole tapped and ran, Crane continuing to be a thorn in the side, making Cole pass forward to wing Stef Andrews.

Newport got their noses back in front on 26 minutes. A high tackle by Aberavon prompted Newport to go for touch. Joe Bartlett took the clean lineout ball before Jon Morris launched off his wing to attack the Wizards midfield directly. Ball recycled, Newport went left again to Elliot Frewen who danced and sprinted forward before hitting contact. The ball spun back right to George Young who did the same as Frewen but with more crash than dash. The ball came right again as a dizzying array of runners picked their lines. Will Reed whipped it wide to Jon Morris who entered the Aberavon 22 before popping out to Matt O’Brien who picked a line between the Aberavon 6 & 8, on point duty beside the maul, to saunter over and score under the posts. Will Reed added the conversion to make the score Aberavon 7 Newport 10.

Newport were in receipt of a stroke of luck on 29 minutes when Dai Richards seemed to be caught in two minds. He was wrapped up by the voracious Aberavon loose forwards but got away with it when Mr. Whitehouse spotted a technicality in the tackle, just as well, as Richards had been pickpocketed and the Wizards were away /..towards the Newport try line.

Newport extended their lead on 32 minutes via Elliot Frewen. Will Reed had kicked long, testing the Aberavon back three. They responded but were relieved of possession in contact. Matt O’Brien’s chip kick had the Wizards floundering as it bounced. Aberavon cleaned up well enough but, as they tried to run out of defence, a poorly executed reverse pass by wing Matthew Jenkins fell into the hands of the Wing Commander. As we know, these incidents are the bread and butter of poachers like Frewen and, once he had the ball in hand, he was away, running a curve into the posts for a try. Will Reed added the regulation two-pointer to make the score Aberavon 7 Newport 17.

Following a penalty for a high tackle, Aberavon punted for the corner on the terrace side. Newport gained the ball following a knock on in the lineout but Aberavon tightened the defensive screws. Dai Richards ran out of defence but was snagged. The ruck formed, but Luke Crane’s clearing kick was charged down by Ashton Evans, the Wizards blindside flanker. The ball looped up and Evans caught it cleanly, ambling over for a try like an old fella doing a Park Run. Chris Banfield kicked the conversion to make the score Aberavon 14 Newport 17 on 38 minutes.

As the half ran out of time, Aberavon mounted an attack. Newport upped their physicality, Joshes Reid and Skinner especially outstanding in this aspect. Aberavon did create a hole in midfield but, luckily for Newport, in was tight head prop Chris Davies that was the player sent through. He was soon downed but the Wizards kept ball. They opted to play to their right but a pass out from for Newport player Chay Smith was telegraphed somewhat and Elliot Frewen, hand outstretched, picked the ball out from mid-air and sprinted, almost unopposed, from near his 22-metre line, to score. Will Reed smacked the conversion over to give a halftime score of Aberavon 14 Newport 24.

The Wizards’ Joe Thomas restarted the game, kicking long to Jon Morris. Will Griffiths bustled into the attack before Luke Crane kicked the ball away. Aberavon passed the ball across the field, but Elliot Frewen caught the ball-carrier and dislodged the ball, earning possession back for the Black and Ambers. Jon Morris continued to be lively with the ball as he came looking for work off his wing and elbowing Newport into the Aberavon half but sloppy handling by both teams saw the ball bobble harmlessly loose.

Both sets of players went flying into each other, the halftime break appearing to have energised them both. There was barely any room to move as players with the ball were shut down within seconds of receiving it. Garin Harris did superbly to dislodge the ball and carry away passing to Josh Skinner who popped the ball off the floor to Luke Crane who was snared, but Aberavon had retrieved the ball illegally with hands in the ruck. Will Reed lined the kick up for a successful kick at goal to make it Aberavon 14 Newport 27 on 47 minutes.

There could have been trouble for Newport when Joe Thomas, the Afon 10, broke the Newport line and passed wide to his unmarked wing Matthew Jenkins, but the ball was low and all he could do was hack it forward into touch. Worse was to follow for Newport, though. Following Newport not releasing in a tackle, Aberavon went to the corner. Second row Rhodri Hughes claimed the lineout ball before a superb rolling maul formed with Luke Davies coupling to the tail again. It swamped the Newport defence, turning as it went, allowing Davies to claim his second try of the game. Chris Banfield missed the conversion, so the score now was Aberavon 19 Newport 27 on 54 minutes.

Aberavon were intensifying their attacks, but the Black and Amber wall was standing firm. George Young was terrific in turning defence into attack and he and Josh Reid often linked up well.

Newport shipped a 63rd minute penalty for not driving straight at the scrum. Chris Banfield stepped forward for the Wizards to slot the kick nicely, making the score Aberavon 22 Newport 27.

It was Aberavon’s turn to leak a penalty on 67 minutes when the scrum went straight down. Will Reed lined up a long kick at goal and it sailed effortlessly between the uprights making the score Aberavon 22 Newport 30.

Aberavon could clearly sense that time was ever so slightly against them. They turned the dials up on everything, making Newport work even harder for their lead. Dan Suter, on as a front row replacement was soon into the thick of things, carrying into contact well as the Black and Ambers responded to the challenges laid out for them. In the anxiousness to get to a ruck ball, both Luke Crane and Matt O’Brien went off their feet, giving Mr Whitehouse and easy penalty decision to make. Again, Chris Banfield slotted the goal to keep the Wizards in touch and make the score Aberavon 25 Newport 30 on 73 minutes. Game on.

In their over-eagerness to get into Aberavon, Newport strayed offside at the restart, a clumsy mistake that gifted the Wizards the ball back. Their big forwards made ground against Newport as the pall pinballed around between backs and forwards. It was taking every bit of energy and knowhow from campaigners like Rhys Jenkins to get their bodies between ball and player. The scramble defence was remarkable by Newport; each player made themselves available to tackle and they all held themselves accountable to their mates to make that tackle. However, the string of penalties from Mr Whitehouse was only going to have one conclusion: a yellow card for Andrew Mann on 80 minutes for collapsing a maul.

Newport were playing the odds. With a five-point buffer there was some leeway. With a penalty conceded in front of the posts, a cross kick from Joe Thomas out to his winger, Stef Andrews, could have proved the match winner for the Wizards, had it gone to hand. It didn’t but, with the advantage, the opted back for their powerful scrum. Rather than concentrate on the heave, they broke and were snapped up by the Newport back row. The red and black jerseys were driven backwards as they were met with ferocious resistance and, ultimately, gave the game away when second row Shay Smallman flopped over the ball at the ruck. Mr Whitehouse lifted his arm in Newport’s direction to a jubilant reaction by Newport, players and supporters alike. Will Reed kicked the ball dead to claim the win. This was a classic example of the old cliché, that the forwards deciding who wins and the backs deciding on the margin of victory.

Newport are next in action at a post-Christmas visit to Ebbw Vale. Eugene Cross Park is always a tricky place to visit but, after the recruitment of Jason Strange as new Head Coach there, and the sting of two recent defeats to the local rivals, viz us, then you can be sure that there won’t be too much Spirit of Goodwill around between half past two and four o’clock on December 27th.

Into 2022, then, and the Black and Ambers head west to Swansea for a league game on Monday January 3rd, kicking off at 2.30pm.

It only remains to add that everybody at Newport RFC wishes you a peaceful and safe Christmas and, hopefully, we’ll see you at the next home game for Newport RFC in the New Year.