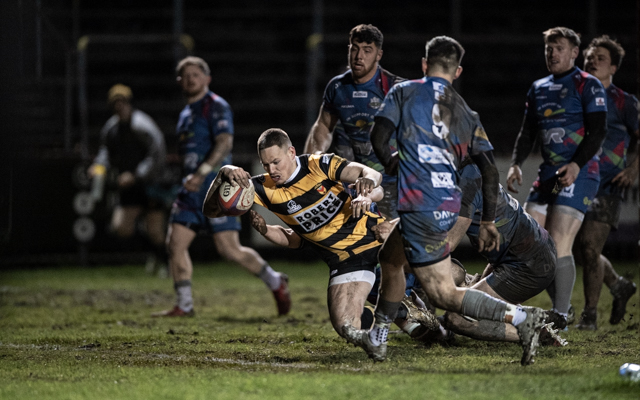 Following the thoroughly convincing win at home against Pontypridd last Thursday, it was time for the Black and Ambers to travel for an Indigo Group Premiership fixture, this time up the valley to Ebbw Vale. This game was also moved to a Thursday for the benefit of S4C’s viewers on their ‘Clic’ YouTube channel. The move to cover the Premiership is to be welcomed; anything providing extra publicity to the division should be, and S4C seem to have chosen their games carefully. I, for one, hope it continues.

When the two teams last met, in November 2021, we had just had Storm Anwen to deal with. Now, following Dudley, Eunice and Franklin, we meet again. The high winds appeared to have done little damage to the fixtures and fittings at Eugene Cross Park, the main concern would be how wet and sticky the pitch would be.

It was a chilly evening as Will Reed kicked off, indeed, there was the lightest flurry of snow minutes prior. Ebbw fielded the ball, kick returning to Dai Richards, the Newport fullback, who safely punted the ball into touch.

Ebbw were trying to battle their way forward but a super spot by Matt O’Brien turned them with a terrific 50:22. Newport took the ball and set the maul, but Ebbw second row Dan Hill was penalised for pulling down the maul. Ben Roach rose high in the middle of the lineout and set the maul again. Henry Palmer burst for the line but was judged to have been held up by Ebbw openside Owen Young. From the restart drop-out, Matt O’Brien spotted a gap, chipped through and reclaimed the ball but was subject to a high tackle. Newport went to the corner again and repeated the process. Josh Skinner bashed forward before Luke Crane spotted an opportunity to spread the ball wide. It went out to Dai Richards who found the ninja warrior, Jon Morris, lurking out wide. Morris gathered the ball and crossed out wide for the game’s opening score. The conversion was missed, so the score read Ebbw Vale 0 Newport 5 on 7 minutes.

Newport extended their lead just five minutes later. Newport found space on their left, room enough for Henry Palmer to make a powerful surge and drag the Ebbw defensive line with him. With the field broken, Matt O’Brien boomed a pass out to Josh Skinner who drew the last defender with a pass that stretched the definitions of the term ‘flat’ and, released Jon Morris to sprint in from 30 metres. Will Reed added the conversion to make it Ebbw Vale 0 Newport 12 in as many minutes.

Ebbw 10, Evan Lloyd, put in a kick to the corner that bounced unsympathetically for Jon Morris who was forced to carry into touch. Newport competed at the lineout but were penalised for jumping across the line. The Steelmen eventually selected to go for a scrum, number 8 Lewis Young bursting from the base, but Ebbw were ponderous in attack, plodding forward from a standing start and were easily mopped up by the vigorous Black and Amber defence. Predictably, the ball squirted loose under pressure and Luke Crane was able to safely clear the ball to touch.

A 22nd minute scrum for Newport proved too strong for Ebbw, gaining a penalty as the front row buckled. Will Reed booted Newport to the corner again, enabling Ben Roach to gather the ball at the lineout. Newport drew yet another penalty, this time Will Reed opted to point towards the posts. The kick was successful making the score Ebbw Vale 0 Newport 15 on 25 minutes.

From a scrum Evan Lloyd broke left and put a simple pop pass into centre Ethan Phillips. Phillips did well to pass the ball out of contact to the looping outside half who loped over for a try, evading Will Reed’s tackle as he went. Lloyd added the conversion to make the score Ebbw Vale 7 Newport 15 on 29 minutes.

As Will Reed restarted, Newport wing Oli Andrew appeared to horribly misjudge his tackle on second row Ethan Doyle. Andrew hit the floor and remained motionless for a few sickening seconds before sitting up, dazed. As is procedure now, he was withdrawn from the game and replaced on the wing by Will Talbot-Davies.

The pitch influenced Newport’s defence following a scrum deep in Ebbw territory; both Cameron Lewis and Matt O’Brien slipped before they were able to tackle centre Ethan Phillips. Phillips had the field open up in front of him as he found wing Dafydd Howells roaring up in support. Will Talbot-Davies demonstrated his commitment to the Black and Amber cause by corner-flagging across the field and joining Will Reed back in defence. The Newport scrum prevailed again, however, and the front row of Smout, Palmer and Suter can take credit for this.

Ebbw found a bit of spirit and verve, as well as cutting out their mistakes. They became genuinely competitive and were nothing like the abject outfit that Newport trounced at home in November. Evidently, the appointment of new coach Jason Strange, the former Newport player, was having the desired effect on the playing staff at the club. As added time was being played, Ebbw’s outside half Evan Lloyd took a tackle from George Young, judged as late by the referee, Mr Ben Breakspear. It was judged as a penalty only, which Lloyd himself took from 42 minutes only to push it to the right of the posts.

There was a real danger of Newport being sucked into an arm-wrestle with a buoyed- up home team on a gluepot pitch; they would need to be smart in the second half and keep away from that.

Ebbw’s Evan Lloyd restarted the game, Dai Richards taking the catch. Newport worked their way from danger until Ebbw failed to deal with a kick. Dai Richards hacked the ball ahead encouraging Jon Morris to sprint, but Ebbw fullback Dan Haymond arrived their first. Morris contested the ball strongly and was rewarded as the cavalry arrived in the form of deck specialist Kyle Tayler who snaffled the ball back to the Newport side. Sadly, for Newport, the position was lost as they snuck offside.

Mr Breakspear was alerted to foul play on 45 minutes as Ebbw number 8 Lewis Young committed a high tackle on Will Talbot-Davies. The Ebbw man was invited to sit out play for ten minutes. Will Reed kicked Newport to the corner then went across field. Cameron Lewis proved his effectiveness again by picking a path through a dog-legged defence, fending a half-hearted tackle, and powering across for a well-taken try. Will Reed added the conversion to make the score Ebbw Vale 7 Newport 22.

A strong run from Ebbw wing Dafydd Howell put his team deep in the Newport 22. As the Black and Ambers streamed back in defence, Mr Breakspear judged that Luke Crane had strayed offside. He, too, was shown a yellow card, on 52 minutes, making it 14 players apiece for a few minutes. Ebbw opted to kick for goal, Evan Lloyd doing so successfully, making the score Ebbw Vale 10 Newport 22.

Will Talbot-Davies did well to halt Ebbw wing Carrick McDonagh, winning the penalty as the he held on in the tackle. Will Reed nursed the touchline nicely, putting Newport in a strong position. They worked their way into the centre field, with little on, seemingly, until a moment of vision from Matt O’Brien provided, what would ultimately be, the match-winning score. He switched direction as he spotted Ben Roach alone and unmarked out on the left. A delicate kick picked the number 8 out, who then took the ball, stood the wing McDonagh up, and cantered over for a try. Will Reed added the two-pointer to make the score Ebbw Vale 10 Newport 29.

Kyle Tayler suffered a nasty-looking leg injury on 63 minutes, requiring replacement by Andrew Mann. Hopefully the injury isn’t too bad, and Tayler is back in Black and Amber before too long.

Ebbw went close to a score on 65 minutes as prop Joel Harris took a gut pass from hooker Harri Bee, but there was a forward pass in the move giving Newport a scrum.

There was a lovely bit of skill from Will Reed on 71 minutes that almost released Dai Richards for a long sprint to score as he made a blind pass behind him but was judged forward by Mr Breakspear, which was unfortunate as it really appeared not to be.

Mr Breakspear was in the news again on 73 minutes as he penalised Matt O’Brien for not rolling away from a tackle, despite him clearly being pinned to the ground. Ebbw went to the corner and formed a scruffy, but effective, rolling maul, as backs joined in to add extra heave. The try was credited to Joe Thomas, Rhys Jones converting to make the score Ebbw Vale 17 Newport 29.

Ebbw powered on, sensing something was achievable from the game. A 77th minute drive was penalised as second row Dan Hill flopped over the ball-carrier, sealing the ball off from the Newport defence.

The game was deep into injury time when Ebbw gained the point they craved. Mr Breakspear was penalising Newport consistently while Ebbw picked up the pace led, primarily, by former Newport scrum half Jon Evans. The Black and Amber defence was forced to put a real effort in, stay organised and close the game out. However, a string of decisions against them proved too much. A penalty to the corner led to another rolling maul which, again, the backs joining in, Neath-style, to force their way over the line. This made the score Ebbw Vale 22 Newport 29.

Unbelievably, with 87 minutes played, there was time to restart. With Mr Breakspear consistently putting his right arm up, Ebbw launched a final attack. There was nothing they would like more than to deny Newport the win, which is perfectly understandable. An 89th minute penalty for Newport going off their feet at the tackle could have proved decisive as Ebbw went to the corner. They weren’t allowed to set the maul so had to go wider. A succession of forward drives ensued as Ebbw got ever closer. The Newport scramble defence proved magnificent as Ebbw were repelled time and again until, finally, a final drive was held up. Mr Breakspear asked his TMO, Mr Sean Brickell, for assistance and both referees agreed that the score was not to be given and time was up.

On the Wikipedia website, under the definition of ‘winning ugly’, should be a link to S4C’s YouTube coverage of this game. However, it was absolutely job done. To visit Eugene Cross Park on a cold weeknight and get the ‘W’ would have been good enough; getting the try-scoring bonus point was the cherry on the cake and the Black and Amber train keeps rolling.

Newport RFC are next in Indigo Group Premiership action on Sunday March 6th, when they visit Parc Y Scarlets to play Llanelli RFC. The Friends of Newport Rugby Trust will be running a bus to this game, numbers allowing, so be sure to book your seat for a game that may prove tricky to reach by public transport. The price to travel is £20 per person. To reserve your seat please email Steve Bennett on stattonrfc@live.co.uk.

The next home game is against our oldest friends, but biggest rivals, Cardiff RFC. This game, also an Indigo Group Premiership game, will take place at Rodney Parade, not Newport Stadium, on Saturday March 12th and kicks off at 2.30pm. We hope you’ll be able to join us for what will, hopefully, be an entertaining game!