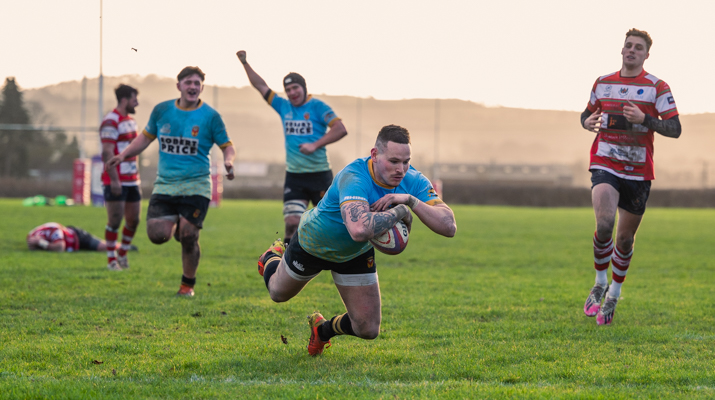 Newport haven’t visited the picturesque Llandovery rugby ground since November 2019, what with a global pandemic and all, but it was a pleasure to return here, if only for the Red Kites that wheel silently above the hills surrounding the Church Bank ground. The last visit ended in a soggy 3-9 victory for the ‘Port, but Llandovery don’t just give away ‘W’s anymore, they are absolutely earned. The Drovers finished their West division cup campaign at the top of the ladder, as Newport did in the East section, so it was clearly going to be a tough game, potentially against the two best semi-pro sides in the country.

Newport fielded a relatively stable first XV, only Joshes Skinner and Reid absent through injury, but ably replaced by Messrs Mann and Young.

Wearing their change ‘Monmouthshire blue’ strip, Newport took to the field and lined up, alongside the red and white hooped Llandovery team, for a minute’s silence for a Drovers supporter. It was impeccably observed with only the sound of distant farm machinery breaking the silence, which somehow seems entirely appropriate around these parts.

Will Reed kicked off for Newport with the Black and Ambers defending the clubhouse end. A kick return by Llandovery full back Will Thomas looked useful but was safely dealt with by Dai Richards. However, from the lineout, an excellent kick by scrum half, and captain, Lee Rees, wasn’t dealt with well at all, evading Matthew Powell, and became a superb 50:22 for the Drovers. Newport were under pressure straightaway. Second row Osian Evans claimed the lineout ball, but the rolling maul was dealt with well. Flanker Stuart Worrall was gang-tackled before Luke Crane could pick off a fumbled ball and boot it to safety.

Newport looked to have eased the pressure, but Garin Harris was penalised for holding on to the ball in the tackle prompting Llandovery to go to the corner. From the lineout, the Drovers worked the ball well, running through multiple phases. The Newport defence was resilient, to a point, but, eventually, a three-on-two overlap was created out wide that saw second row Osian Evans crash over for a try. Centre Kristian Jones conversion was missed, so the score was Llandovery 5 Newport 0 with ten minutes played.

Will Reed’s restart went into touch on the full, an unfortunate unforced error that simply gave the lively Drovers the ball back with a scrum on the centre spot.

Llandovery were lively, looking to run most things, whereas Newport looked plodding and clumsy. The Drovers back three were good at field positioning for receiving kicks and excellent at linking up. Their scrum was very powerful, and, in Lee Rees, they had a someone who just wanted to speed things up all constantly. Newport were being slowly suffocated and didn’t appear to have any answers at this point.

Newport bothered the scoreboard on 18 minutes when a Matt O’Brien kick was touched in flight and became a 50:22. The Black and Ambers drove from the rolling maul before Luke Crane spread the ball left. Matt O’Brien was tackled but there were Llandovery hands trying to play the ball on the floor. Will Reed slotted the penalty to make it Llandovery 5 Newport 3.

Home outside half James Garland put in a good 50:22 on 28 minutes, then bossed the follow-up play well, changing points of attack as the Red and Whites arrowed in on the Newport line. A mix of short pop passes and longer miss-ones kept the visiting defence guessing but it was the bludgeon of prop Berian Watkins and his ability to pass out of contact that saw Osian Evans gallop over for his second try. Kristian Jones’ kick made the score Llandovery 12 Newport 3.

Worse was to follow for Newport with a try by wing Tomi Lewis. James Garland was controlling play well and a pass back inside to centre Rhodri Jones cracked Newport open. His reverse pass out to the expectant winger was devastating in its simplicity and Lewis could cross gleefully. Luckily, for Newport, Kristian Jones had left his kicking boots at home, so the score now read Llandovery 17 Newport 3.

It took until the 40th minute for a glimpse of Newport playing in the style that they’ve played all season, completing multiple phases, Dai Richards jack-in-the-box like in attack and Luke Crane doggedly chasing around the base of rucks, but it still wasn’t enough. Llandovery were flooding defences, regaining possession, and running the ball out of defence. Newport looked a distinct second-best in most departments at this point. As the half time whistle blew, the only shaft of light was someone mentioning that the performance away at RGC this season was like this. We had to hope that the coaches could sprinkle a bit of stardust on the boys, otherwise this could end up as a rout.

Kristian Jones restarted the game for Llandovery and their appeared to be little change. Newport were falling off tackles as the bulky forwards seemed to make ground with every charge and Lee Rees kept the pace up as they tied Newport up in knots. The ball spread wide to wing Tomi Lewis who kicked ahead. As he chased, Matt O’Brien crossed behind him and caught his legs. Lewis fell like a sniper at the back of the stand had got him. After some deliberation with his assistant, referee Elgan Williams showed O’Brien a yellow card. Inexplicably, Mr Williams then allowed Llandovery to re-take a line out that they had mucked up, despite their players retreating, expecting to be punished. Thankfully, some poor decision making by the Llandovery forwards let Newport off the hook and, after a series of scrums, Newport gained a penalty of their own.

The 47th minute introduction of Kyle Tayler and Louis Jones was game-changing. Tayler, an expert at wrestling for ball on the deck, could now compete at the breakdown, which would prove vital. Indeed, within minutes, Tayler was in his element, winning Newport a penalty to push them into attack. Suddenly, Newport had parity, despite bring down to 14 players. Newport pushed ahead, going through phases before a three-on-two developed on the right. Llandovery wing Ashley Evans tackle on Cameron Lewis was judged to have been a deliberate knock on, leading to Mr Williams reaching for his pocket again. From the lineout, a good rolling maul was set, and Will Griffiths latched onto the back to cross for a regulation hooker’s try. Will Reed added the extras to make it Llandovery 17 Newport 10 on 51 minutes.

With Matt O’Brien back on the field, Newport held a numerical advantage. The Black and Ambers could afford to test Llandovery out a little and a tackle on Cameron Lewis in midfield yielded a penalty as the Drovers sought to retrieve the ball. Will Reed kicked Newport into the corner to set up. Good driving from the forwards eased Llandovery backwards until Luke Crane spotted an equal match on his left. A pass zipped out to Matt O’Brien was quickly shipped on to Elliot Frewen, who is not going to be stopped from five metres in a one-on-one. He glided over out wide to make the score Llandovery 17 Newport 15 on 57 minutes. The tide was turning.

The scrum was still experiencing some difficulty. The big farmers boys in the Llandovery front row were dominant for most of the afternoon and it won them another penalty on 61 minutes when Newport were shunted backwards. Kristian Jones’ penalty attempt hit the left hand upright and was booted clear by Luke Crane.

A big hit on James Garland, the Llandovery 10, by Cameron Lewis, dislodged the ball allowing Matt O’Brien to put a mighty boot to it. Elliot Frewen chased upfield but was beaten to it by covering wing Ashley Evans. However, in the subsequent passage of play Will Reed was tip-tackled onto his neck by Kristian Jones who may consider himself lucky to have only seen a yellow card. Reed dusted himself down and booted Newport to the corner again. Andrew Mann jumped at the middle of the lineout, set up the maul and it was Will Griffiths who benefitted again as it forged right and enabled the Newport hooker to crash over. Will Reed’s conversion was wide, so the score now read Llandovery 17 Newport 20 on 66 minutes.

Dai Richards put in a superb kick which was central to the Llandovery 22, making both available defenders track back to cover it. The return was kept infield by Elliot Frewen as Newport created an attacking platform. Will Reed accelerated into contact, Matt O’Brien pulled the strings and Cameron Lewis provided the muscle as Newport powered ahead. Eventually, Cameron Lewis took a pass from deep, running at an angle, evaded the tackle of Llandovery’s Garland, who was injured in the process, and sprinted in for the bonus point try. Will Reed added the conversion to make the score Llandovery 17 Newport 27. If you looked carefully, there were glimpses of stardust being caught in the rays of the low afternoon sun.

From the improbable position of being 17-3 down, Newport had hauled themselves into taking all five points back down the A40 with them and denying Llandovery anything. The Drovers fought hard to gain another try, there were still at least two points for them to gain, if not all five.

Newport defended well, stopping Llandovery short of their line. It was threatened when wing Ashley Evans broke through, but he spilled the ball as he went. The clock continued ticking as Newport repelled attack after attack, but Llandovery seemed blunt, making some odd decisions, both tactically and in their discipline.

On 77 minutes, Newport second row Dan Partridge took the field for his 100th appearance for the club, a remarkable achievement. Congratulations to the ‘Cobra’!

But this wasn’t a ‘gimme’ for him; there was still work to do, and he would play his part.

With 79 minutes played, Llandovery five metres from the Newport line and driving for a fourth try, Matt O’Brien was guilty of making a ‘seatbelt’ tackle which Mr Williams picked up. However, ill-discipline saw a Llandovery player throw a punch at O’Brien subsequently allowing Mr Williams the easy option of reversing the penalty and letting Newport off the hook.

Llandovery came even closer to the two points they craved when they were torn apart and Iestyn Rees strode over to touch down, but Mr Williams called play back and awarded a scrum to Llandovery. The Drovers were determined, as deep as 87 minutes in and they were almost through again but the pass out of contact to wing Tomi Lewis was high and behind him.

What seemed an unlikely situation at 3.15pm had been completely reversed. Newport had scored four tries, won the game and, critically, denied Llandovery anything at all, which was remarkable in itself.

With the Six Nations almost upon us, Newport RFC get a couple of weeks away from playing now. They are next in action on Thursday February 17th at 7.30pm when they host Pontypridd at the Newport Stadium. This game will be shown on S4C’s ‘Clic’ channel on YouTube. The following game is away, also on a Thursday, February 24th, when they visit Ebbw Vale in a rearranged fixture. This will also be shown on ‘Clic’ live.

Newport RFC Man of the Match – Will Griffiths