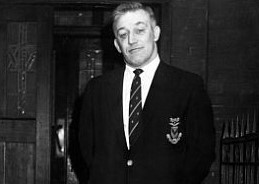 Newport RFC were saddened to receive the news today that former player and international prop Des Greenslade passed away on Tuesday.

In eight seasons from 1955/56 up until 1962/63, Des virtually played every game for the club amassing a total of 286 appearances. A superb testament to his ability and fitness.

Capped by Wales, Des also played representative rugby for Crawshay’s and The Barbarians.

A member of the Newport team that beat Australia 11-0 in 1957 he will be sadly missed by his many friends at the club and in rugby in Wales.