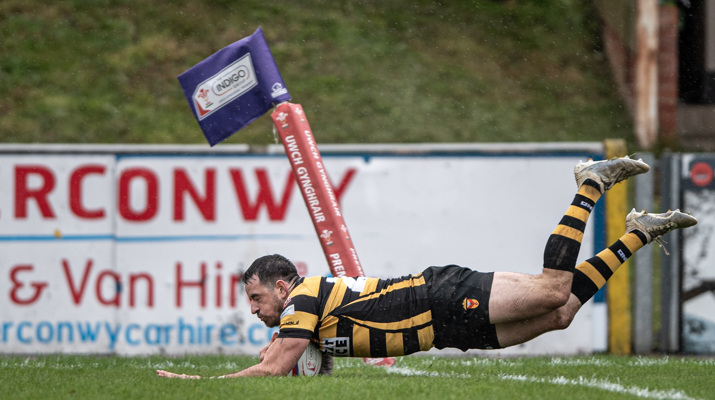 Newport’s Indigo Group Premiership Cup campaign continued with a trip north to Colwyn Bay to face RGC, a team now coached by Newport old boy Ceri Jones, who acknowledged his, and his father’s, links to our club in his program notes. After taking a fearful battering by Cardiff in the opening week they only just fell short at Merthyr the following weekend. What sort of team would Newport face?

The weather was unpleasant in Colwyn Bay come Saturday afternoon, constant rain and blustery winds during most of the game. When supporters were locked down over the last year or more, daydreams of watching rugby rarely featured weather like this.

Newport fielded a similar team to the one that beat Cardiff last weekend, George Gladding dropping to the bench with Haydn Simons coming in and Rhodri Jones switching to start, with Lennon Greggains in the reserves. Elliot Frewen was, presumably, still crocked after his early exit versus Cardiff allowing Ryan Gardner to start.

Will Reed kicked the game off at 2.33pm allowing RGC loose forwards Jordan Jones and Sam Williams to run back at the Black and Ambers. Scrum half Tom Ellis box-kicked RGC forward and Josh Reid began the counterattack.

RGC posted intent early with a well-executed 50:22 which pinned Newport into their own 22 metre area. The forwards rumbled allowing their backs some time and space before a pass from fullback Dion Jones was spilled by wing Harri Evans letting Newport off the hook this time.

The first try came on 7 minutes. Newport were penalised. Tom Ellis instinctively tapped and attracted another pen as Newport were offside. RGC went through the phases, attracting penalties as they went, before outside half Danny Cross spotted space behind the Newport line, dinked a kick through for wing Harri Evans to scoop up and score. Cross converted to make the score RGC 7 Newport 0.

RGC were penalised themselves on 11 minutes for holding onto the ball in the tackle. Scrum half Ellis hung onto the ball as he retreated, much to Luke Crane’s annoyance. The referee, Mr Dewi Phillips, concurred, walked RGC back ten metres and into Will Reed’s kicking range. Reed took the opportunity to register a score and made it RGC 7 Newport 3.

The ball was becoming slipperier as the game went on. RGC looked reasonably comfortable in possession but the Newport defensive line held up. RGC were pinged for offside on 19 minutes. Will Reed kicked to the corner and put the team ten metres out. Josh Skinner rose for the catch, Lewis Smout set up the drive but the follow-up ‘pod’ of three players were judged to have made a ‘flying wedge’ and possession was lost.

Newport were not settled at all. They were inaccurate. No faulting the effort, but they were still on the bus in terms of playing the game. The one benefit was that Josh Skinner seemed to have developed a neat line in stealing opposition lineout throws, something that may have been keeping the Black and Ambers in the game at one point.

The referee, Mr Phillips, didn’t seem to be having the best afternoon, either. There were some reasonably obvious things being missed, for both teams, to be fair. Offside appeared arbitrary, as did some of the lineout laws. However, the biggest insult came on 35 minutes when RGC scored again. Danny Cross spotted a gap on the right for his team and kicked into it with any one of RGC numbers 11, 13 and 15 offside. There was inter-passing between them, with at least one pass forward, but there we are. Rhys Tudor scored the try out wide to take the score to RGC 12 Newport 3.

Into added time and RGC were exploiting Newport’s inability to shake themselves awake as they pounded through the phases. There was a penalty conceded in defence allowing Danny Cross to take the points and give his team as healthy-looking halftime lead of RGC 15 Newport 3.

Newport had been poor during the half and, if things didn’t improve quickly, they would do well to only come second in this contest.

Newport had a slight personnel change at halftime; props Lewis Smout and Louis Jones were replaced by Dan Suter and Jamie Jeune while Lennon Greggains came in for Rhodri Jones. With the words of Head Coach Ty Morris ringing in their ears, Newport came out for the second half and the transformation was instantly visible. Newport powered forward, keeping passes short to big men running at pace. Lennon Greggains was providing a focus for the attack before Oli Andrew broke the RGC defensive line. The ball popped back inside to Greggains, following up well, and he crashed over near the posts. Will Reed converted to make the score RGC 15 Newport 10 on 42 minutes.

Josh Skinner booted a loose ball long. Full back Dion Jones dithered in defensive duty and was snared. RGC were then penalised for going over the top in defence. Will Reed put Newport into the corner. Josh Skinner won the lineout ball, Henry Palmer held the ball on his hip at the back of the maul before Luke Crane picked his moment to send Oli Andrew in to score out wide. This made the score 15 points each on 44 minutes.

Newport were looking like a different team. George Gladding, on for Ryan Gardner made ground with a strong carry. Josh Reid lunged forward to score but was downed just short of the line while Lennon Greggains was acting as a spearhead to many of the Newport forward drives. In contrast, RGC were struggling; their lineout had ceased to function, scrumhalf Ellis no longer had the free ride that he enjoyed in the first half while big centre Rhys Williams, who had been quite effective as a crash-ball lump in the first half, was now utterly neutralised.

63 minutes brought the bizarre sight of RGC’s new hooker taking the field. Nothing wrong with that, but the hooker was Brodie Coghlan, who the club had believed was part of its squad. Obviously, as he is contracted to the Dragons, they can place him wherever they like, but it does little for squad coherence. Matt Dwyer, prowling the touchline as reserve to Henry Palmer, appeared to be licking his lips at the prospect of getting on and furthering Coghlan’s rugby education.

Lennon Greggains was foremost again as Newport ramped the pressure up. The home crowd, vocal and stamping their feet during the first half, had gone awful quiet. RGC infringed again prompting Will Reed to poke the ball towards the corner. Josh Skinner won his ball, set the maul and the power came on, allowing Henry Palmer an armchair ride to score from the tail. The score now was RGC 15 Newport 20 on 68 minutes.

RGC managed to kick to touch straight from the restart. Matt O’Brien kicked forward, and they then contrived to spill the ball into touch from the catch. The hosts were imploding before our eyes as bizarre decision followed bizarre decision; they were only five points adrift yet thought it sound to pass across the line inside their own 22 and, eventually, put in a cross-field kick in the same area. It was 32 minutes into the second half before they managed a meaningful attack at Newport. They have some talented players at this club, but something isn’t right just now.

Newport killed the game off on 77 minutes when Clayton Gullis crossed. Ben Roach salvaged a rickety Newport scrum and drove on. Matt O’Brien’s kick ahead looked neither one thing nor the other, but it was made to look outstanding when it ended up in Haydn Simons’ hands. He found a few inches of space on the right with Gullis running alongside him to his left. They executed a simple draw and pass and, with the last defender evaded, the game was up and the comeback, almost, complete. Will Reed kicked the conversion to make it RGC 15 Newport 27.

Josh Skinner appeared to have put on Matt O’Brien’s boots by mistake. A 79th minute kick, from inside his own half, rolled beautifully into touch just metres from the line as RGC watched on, dismayed. Sadly, nothing came of it, but Skinner is playing out of his skin at this point.

With time ebbing away it was just left for Geraint Watkin to take the ball and boot it into touch for a terrific turnaround and a demonstration of the team spirit within the group at the moment. Long may it continue.

Newport are back in action next Saturday, October 9th, when they face Merthyr RFC. This game is still subject to a potential venue change and may take place at the Newport Stadium. Please keep an eye on the club social media channels for confirmation of where the game will take place.