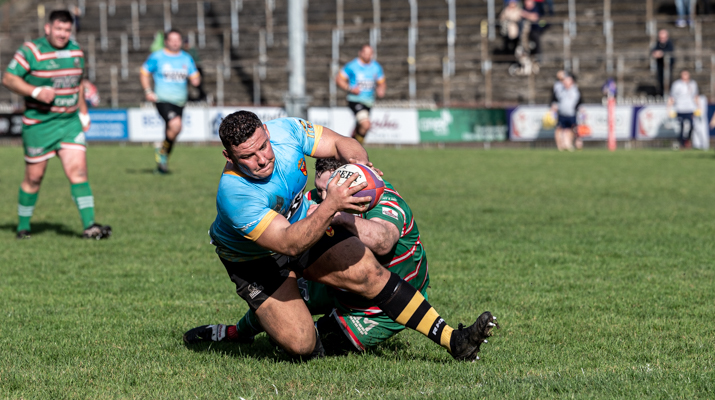 Winning has become a welcome habit for the Black & Ambers this season, and after superb second half performances to see off Cardiff, RGC 1404 and Merthyr in recent weeks, they were aiming for a fourth consecutive win in the Indigo Group Premiership Cup.

Today’s assignment was a trip up to Ebbw Vale and, although never an easy place to visit, the B&As were also seeking a fourth consecutive win at Eugene Cross Park, with all three previous ties being closely-fought battles won by a one-score margin.

Ebbw had had mixed fortunes so far this season, with impressive wins over Merthyr and Pontypridd, but disappointing losses in their previous two league encounters. They would therefore naturally want to make amends against their rivals this afternoon, who met for the first time in over two years.

The hosts had lost captain Joe Franchi to injury during the week, and the B&As had a similar fate today before a ball had been kicked. Ben Roach suffered a head clash during the final phases of the warm-up, which gave former captain Rhys Jenkins the opportunity to step in for his long-awaited first outing of the season.

The early loss of personnel seemed to take its toll on the away side early on, with the Steelmen taking only two minutes to open the afternoon’s scoring. Dafydd Howells took the credit after Ethan Phillips found a gap in the defence and fed the former Wales and Dragons wing, who crossed over for his first of two scores.

Just two minutes later, the scores were level again when a Matt O’Brien dummy led to Lennon Greggains racing over on the wing to earn his third try in three games in B&A. Will Reed, who has more than impressed so far this season, scored his first of 10 points.

After both teams exchanged a penalty kick, Reed took advantage of some ill-discipline on Ebbw’s part to give the away side the lead with the boot. In the meantime, referee Ben Breakspear was giving a stern warning to Vale’s captain Dominic Franchi, taking over from his brother in the interim.

It’s safe to say the backs have been on fire so far this season, but on the half-hour mark, the forwards were looking to get a piece of that action. Hooker Will Griffiths broke through the defensive line and gave Seren y Gêm, Josh Skinner, a channel to feed Garin Harris for his first five-pointer in two and a half years.

Then straight from the resulting kick-off, O’Brien’s quick thinking from the ruck in the Newport 22 gave Oli Andrew the freedom of Blaenau Gwent to ignite an attack. With a little help also from Luke Crane, ‘OB’ sprinted into the corner and finished off the move he began.

Soon after, as half-time approached, Ebbw’s continuous poor discipline gave Breakspear no option but to reach for his pocket and give captain Franchi a ten-minute stint in the sin bin. This took Newport into the break with plenty of momentum and a half-time lead for the first time this season.

If the referee’s patience with the Steelmen’s poor discipline was running low, it had certainly run out by the start of the second period. Second row Dan Hill was first see yellow for collapsing a maul, and Lewis Young was to join him no less than a minute later for the same offence. The latter led to a penalty try for the B&As and left the hosts within seconds of having to play with only 12 men.

Facing only 13 men, the B&As were made to rue their missed opportunities against a depleted side, and were made to pay when Ebbw Vale, eventually back to full strength, closed the gap with another Dafydd Howells try, which was finished off with a tidy kick-and-chase move.

However, the B&As were given another lifeline when further offences from the home side led to a fourth yellow card of the afternoon for the hosts, much to the frustration of their supporters standing on the bank.

Substitute Mathew Powell shone in the final ten minutes and pounced on a couple of opportunities to widen the gap and earn his first points for his new club since joining in the summer. His first finished off a series of slick passes from the Newport backline whilst his second, only two minutes later, saw him race over to end a phase which Jack Wright began after powering through the Ebbw Vale defence.

This superb victory was the Black and Ambers’ biggest at Eugene Cross Park for over 30 years and moves them to the top of the Indigo Group Premiership Cup East table at the halfway stage of the competition.

Next up is the welcome of Pontypridd, the only team to have beaten the B&As so far this season. Join us again at Newport Stadium on Saturday (23 October) at 2.30pm and take your place in the Black & Amber wall for Your City, Your Colours, Your Club.