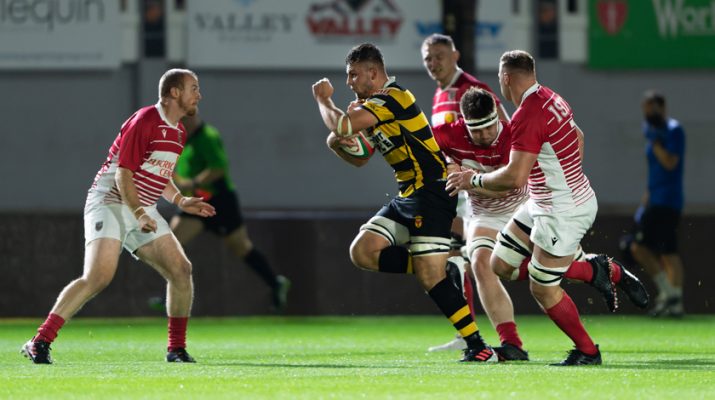 After everything that has happened in the world since March 2020, it was with some relief that the club could welcome back supporters to watch live rugby. And not just any old club, our greatest rivals, and oldest friends, Cardiff RFC. It should be said that there was some trepidation amongst the support before the game based on the previous weekend’s results; Newport had spluttered to a silver-medal winning position away at Pontypridd while Cardiff struck gold in a clinical demolition of RGC at the Arms Park, putting sixty points on their northern visitors. They were described as ‘all but fully professional’ in some quarters. In contrast, the Newport team sheet looked….odd. Some mainstays of the Newport side of recent years were notably absent. No Jenko at 8, no Manny beside him, no Jonny carving up midfield, Matt O’Brien shifted across to 12; it looked, as I say, odd. Cardiff were certainly worthy of our respect but were never to be feared.

There was a perfectly observed one minutes silence before kick-off in which the names of the Black and Ambers who haven’t made it were read out, supporters and players alike. In all there were a shocking 23 names. Rest in peace, all.

Will Reed kicked off with Newport attacking the school end. Elliot Frewen stamped the team’s intention as he motored up and ensured that Cardiff, playing in red and white, were sucked in and not allowed time on the ball.

The recent lineout niggles have far from disappeared. One, the result of a penalty following a Cardiff scrum collapse, saw the ball sail high and handsome over Josh Skinner, and a promising position was lost during the opening minutes.

Cardiff had a shot at goal on 6 minutes when Newport were caught offside in defence, but Jack Maynard, the Cardiff 10, shaded the kick right of the posts. Matt O’Brien tried a tricksy drop 22 restart but inadvertently fumbled his own kick keeping the pressure on. From the scrum, it was a set play by Cardiff as the ball moved across the line, centre Ryan Wilkins providing a flat pass to fellow centre Harri Millard who burst through a flimsy defensive effort, with little trouble, to score under the posts. Jack Maynard added the two-pointer to make it Newport 0 Cardiff 7 on 9 minutes.

Stung into action, Newport went on the hunt. Matt O’Brien, demonstrating a more physical edge to his game recently, tapped a quick penalty and barged into Cardiff back-rower James Richards and earned his team a penalty. The kick went to the corner allowing Josh Skinner to rise high to claim the ball. A series of drives at the Cardiff line followed, Will Griffiths, Lennon Greggains, Josh Reid and Joe Bartlett all took turns at patiently softening up the Cardiff defence as Rhys Downes co-ordinated the effort at scrumhalf. Ben Roach, a new recruit playing at 8, was the player to breach the line as he scrabbled across to touch down. Will Reed added the conversion to make the score Newport 7 Cardiff 7 on 15 minutes.

Will Reed had a chance to put Newport noses in front following a break by George Gladding, with centre Deon Smith in support. Cardiff got a little over-excited in defence, but Reed’s penalty shot was wide by just the width of a coat of paint.

The Black and Amber forwards began leading the charge, big men hitting into big men. Josh Reid made a half-break, gaining several metres into the Cardiff 22. In defence, Jack Maynard, the visitor’s outside half, got a little carried away and was invited to reflect on his actions for ten minutes by the referee, Mr Simon Rees. Newport continued the pounding but to no avail as the ball was ultimately lost in contact.

Newport were burst open by the flat pass again on 31 minutes. Harri Millard opted to kick ahead this time. Matthew Powell, on as an early replacement for a crocked Elliot Frewen, seemed to be back in position to cover, but the ball bounced horribly away from him allowing wing Jake Thomas to dot down. Fullback Dan Fish slotted the kick at goal to make the score Newport 7 Cardiff 14.

The Black and Ambers had a good opportunity to get back on level pegging after Josh Skinner secured a lineout and set up a strong maul. Oddly, the ball popped up, and out, like a bar of soap, with no apparent interference from a Cardiff player. How bizarre. Thankfully, the lineout gremlins didn’t just belong to the hosts; a throw from hooker Efan Daniel missed its intended target and landed in the hands of Will Griffiths who charged off towards the Cardiff 22, spikily evading tacklers as he went. The Cardiff defence were not set, which didn’t go unnoticed by Matt O’Brien, as he placed a terrific cross-kick for wing Oli Andrew to gather and sprint in, dodging desperate defenders as he did so. Will Reed’s conversion, from the touchline, was a thing of beauty as the score became Newport 14 Cardiff 14 at half time.

Cardiff restarted as Newport continued in the same vein that they had ended the first half. A spell of aerial tennis was ended when Cardiff player Ioan Evans, on for Dan Fish at full back, spilled a kick. Deon Smith seized the opportunity and charged up into the Cardiff 22. George Gladding took the burst, but the Cardiff defence had him lined up. Lennon Greggains went on a characteristic skip and charge, but Newport lost momentum when they were pinged for accidental offside. Cardiff didn’t help their cause when a horribly skewed kick went spiralling across field into the hands of Josh Skinner. Claxons sounded in the Cardiff defence and they were found to have strayed offside, allowing Will Reed a simple pot at goal to make the score Newport 17 Cardiff 14 on 44 minutes.

Oli Andrew was putting in a performance worthy of Jonny Morris as he chased, hustled and tackled Cardiff, effectively killing a 47th minute attack stone dead with an all-encompassing tackle on his opposite number. The pressure was sustained, though, and Newport shipped a 52nd minute penalty as the defence clumsily tracked back and impeded an attacker. Jack Maynard doesn’t miss these, to be fair, so the score became Newport 17 Cardiff 17.

Matthew Powell administered a dose of medicine to opposite number Ryan Edwards on 57 minutes as he caught him, man and ball, and bundled him into touch on 57 minutes. Newport were doubling the intensity as pairs of players were going into contact. Sadly, the ball wasn’t being looked after and it bobbled loose from a hit and Newport failed to deal with it. This was then exacerbated by a further ten metres for chopsing at Mr Rees, who walked Newport back to the centre spot. Ioan Evans took his shot at goal and it sailed, straight and true, through the uprights. The score now was Newport 17 Cardiff 20 on 61 minutes. No good ever comes through chopsing at the ref.

Rhodri Jones, on in the back row for Lennon Greggains, brushed fingertips against the ball in a 66th minute Cardiff lineout, but it was enough to destabilise its flightpath and win the ball for Newport. The Black and Ambers went wide quickly to Matthew Powell who put boot to ball. Cardiff were back to defend and push away from their line but Newport turned possession over. Cardiff had strayed offside again allowing Will Reed a chance to make the score Newport 20 Cardiff 20 as the clock began to tick louder.

A golden opportunity to get ahead came on 72 minutes when Will Reed launched a kick deep into the Cardiff 22. This was improved when the defender was judged to have put a foot in touch when taking the catch. The lineout was loose, Rhodri Jones mopping up, but Cardiff were strong in defence and pushed Newport away. George Gladding caught a kick before passing to Matt O’Brien. O’Brien put in an atypical chip ahead to make the defence turn. Josh Reid was in pursuit before Cardiff captain Morgan Allen who, regular readers will know, is the son of former Newport second row Andy, was found by Mr Rees to have obstructed him and earned himself the chance to watch his teammates finish the game in his absence. Will Reed calmly slotted the resulting penalty to put Newport 23-20 ahead on 75 minutes.

As time ebbed away supporters were becoming fearful of the boot of Jack Maynard earning them a draw as the result of a cheaply given away penalty. That penalty came when a maul was collapsed on 80+1 minutes. Cardiff opted to go for gold and kick to the corner. Supporters may remember an occasion, when Maynard played for Llandovery, that he did similar in a game against us at Church Bank one very wet Saturday in 2019. It didn’t work then either. The Newport forwards did brilliantly in wrapping the maul up and turning over possession.

Cardiff were not finished as Maynard played an intelligent 50:22 and won his team an equally threatening lineout, allowing the big forwards to biff up the middle of the park. Newport held them out well until Cardiff began to loosen up and, with a final act of defiance, it was Matt O’Brien who emerged from a maul with the ball clamped to his chest, the plaudits from his mates coming thick and fast. Cardiff were clamouring for something, anything whilst the Newport players put up an impressive firefight to keep them out before Luke Crane kicked the ball dead to claim a satisfying, and much deserved, win.

Newport RFC are next in action on Saturday October 2nd when they travel to Colwyn Bay to take on RGC 1404 at the Zip Wire Stadium. This is another Indigo Group Premiership Cup fixture. Games against RGC are always pretty exciting so an entertaining afternoon is expected. The next home fixture is on Saturday October 9th when the Black and Ambers face Merthyr. The venue for this fixture is still to be announced, please keep an eye on social media for any announcements and details.

It was a fantastic evening, almost a celebration of Black and Amber rugby, and I know that my father, Ray Evans, one of the 23 names read out pre-match, would have absolutely bloody loved it.