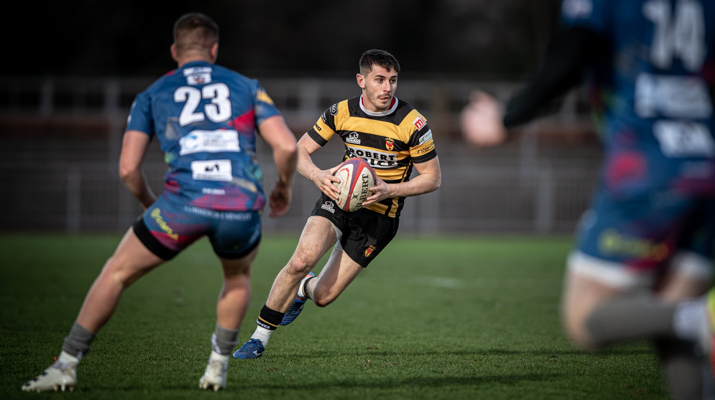 Storm Anwen, as it was named, provided some tricky conditions for a game of rugby. Gale force winds had blown all night and continued into the afternoon, only abating before the game, then becoming just extremely windy. Coupled with a north wind, it proved chilling in the stands for the crowd who had come to see the first local derby to be staged at our new home. Ebbw Vale were our welcome visitors who have had a disappointing start to the season, lying bottom of the East Division with just two wins. However, when you factor in that those wins were against Pontypridd and Merthyr, then it shows that there is some talent there and they weren’t to be taken lightly. The other imponderable is that an Ebbw player’s least favourite colours are Black and Amber; if any shirt is going to inspire them to play hard, it’s ours!

Ebbw Vale took to the field in a royal blue strip with red and green flashes and defended the SDR end, while Newport wore their traditional colours and defended the Cricket Club end. Newport were led out from the changing room by prop Garin Harris who was making his 100th appearance for the club, congratulations Garin.

Will Reed started the game by kicking long but, playing with the wind, Ebbw returned the kick with a little interest added on. Josh Skinner took the lineout ball, but Ebbw were penalised for fringing around the maul. Will Reed booted Newport to 15 metres out, terrace side, for Ben Roach to claim the tail ball. A powerful maul formed around him and Newport bullied there way across the line allowing hooker Will Griffiths to score the opening try on 2 minutes, making the score Newport 5 Ebbw Vale 0.

Newport knocked on the restart and then conceded a scrum penalty allowing the Ebbw ten, Evan Lloyd, a kickable penalty. This drifted wide, understandable in the gusting wind, but demonstrated that Ebbw had teeth.

Newport were working hard, but not smart. Ebbw had clearly done their homework on our backline and were quite good at slowing down the breakdown areas with players “happening” to fall on the Newport side. Rhys Downes, at scrum half for Newport, seemed frustrated at this and struggled to get any rhythm going for a while. But, for all the hard work, it was two poor tackles that allowed Ebbw Vale in to score a well-worked try. Centre Joe Westwood, son of former Newport player Jonathon, evaded the Newport midfield and boomed a super pass out to his right to wing Euan Rosser. He had work to do still but struck lucky as the Newport tackler dropped off him allowing him a sprint to the line to touch down in the corner. Evan Lloyd converted to make it Newport 5 Ebbw Vale 7 on 18 minutes.

The referee, Mr Aled Evans, penalised Ebbw prop Dave Whiting on 23 minutes for collapsing a scrum. Will Reed pumped Newport into the same corner as earlier. Ben Roach caught the lineout ball again and, as the maul set, Mr Evans spotted prop Whiting collapsing it. After buying himself a few seconds to decide, Mr Evans awarded Newport a penalty try and showed the hapless Whiting a yellow card. No conversion necessary, the score now was Newport 12 Ebbw Vale 7.

Newport sought to exploit the numerical advantage and were rewarded almost immediately. An Ebbw lineout was found to be not straight at the throw-in. Newport won a penalty from the resulting scrum and Will Reed booted Newport into the corner again. Josh Skinner grabbed the lineout, another powerful maul set up and it was Lewis Smout who emerged from the bottom of the pile with the ball. Will Reed added the conversion to make the score Newport 19 Ebbw Vale 7 with 25 minutes played.

Ebbw were spurred into action when they responded to a lively Will Griffiths run. The hooker was deemed to have held onto the ball in the tackle allowing them to kick to about 30 metres out from the Newport line. They went through the phases but scrum half Jon Evans, a former Newport player himself, was high tackled as they did so. A further kick to just ten metres out saw Ebbw go through more phases, but Newport had drifted offside. With a penalty advantage Evans was almost through but fumbled the ball as he went. Ebbw, prudently, opted to kick the penalty and keep within touching distance of Newport. Evan Lloyd did just that, making the score Newport 19 Ebbw Vale 10.

It was Evan Lloyd who restarted the game for Ebbw, and they began the half quite well but a strong counter-ruck from Newport regained possession. It was clumsily cleared away, Matt O’Brien finally putting leather on the ball, but a late hit from an Ebbw player simply led to a penalty where the ball landed. Will Reed kicked the ball into the corner, terrace side, Cricket Club end, for Josh Skinner to take the line out ball, form another powerful, driving maul and allow Josh Reid to emerge with the ball. With the conversion missed, this made the score Newport 24 Ebbw Vale 10 on 43 minutes.

Ebbw hooker Connor Chapman timed his run onto an overthrown Newport lineout well but met with aggressive Newport defending. He managed to get the ball away to centre Ethan Phillips but Newport’s Dafydd Smith was up quickly prompting Phillips to hang onto the ball for too long. Will Reed took the kickable penalty to make the score Newport 27 Ebbw Vale 10 on 48 minutes.

Ebbw Vale were struggling a bit, they were inaccurate and clumsy in attack, but attacking they were, and Newport had to stop them. A relieving kick by Newport was fielded by the talented Ebbw full back Dan Haymond who soon found himself snagged by two Black and Amber jerseys. Sadly, Will Griffiths found it necessary to crash into Haymond with a shoulder charge. It was completely unnecessary as the Ebbw player was well held. Mr Evans had no compunction in waving a yellow card.

Newport beasted a 59th minute scrum and won a penalty for their efforts. Will Reed repeated the routine. Kyle Tayler and Elliot Ferriman peeled blindside for Henry Palmer to pump forward. Ebbw were offside, so Newport reset. Josh Skinner, a constant source of lineout possession, took the ball and it was Kyle Tayler who claimed the touchdown. Will Reed added the conversion to make the score Newport 34 Ebbw Vale 10.

It must have really stuck in the craw of the band of Ebbw Vale supporters that their team, so recently known and feared for their efficient catch and drive routine, dubbed the Catch and Kynes, in honour of the inevitable scorer of tries, flanker Ronnie, that they had been undone by five such tries against them, and by Newport, of all teams.

Ben Roach robbed Ebbw’s replacement scrum half Matthew Flanagan of possession after he seemed to want an age to get the ball away. The ball popped up to Viliame Kotobalavu who strode away, skittling Ebbw defenders as he went, putting Newport firmly in control.

Ebbw Vale were out on their feet by now. Newport upped the pace as Will Reed tapped a penalty quickly for George Gladding to run at the heart of the tired Ebbw defence. He made his way into the 22 metre area but spilled the ball as desperate last challenges came into him. Dafydd Smith was relentless in defence, pinning Ebbw ball carriers deep in their half. The gaps inevitably came and everyone at the club was absolutely delighted that it was Matt O’Brien who skated through a struggling defence to score the try that takes his personal points tally for the club to 925 and puts him as the fifth highest points scorer in the club’s long history, overtaking the mighty Leighton Davies in the process. Congratulations, Matt! With Will Reed converting that made the score Newport 41 Ebbw Vale 10 on 74 minutes.

Newport were exuberant, the players all buying into the strategy laid down by the coaches and wanting to play for their mates. This was personified by Matthew Powell, on as a wing replacement, who, even with this score line and level of domination, chased an upfield kick hard and tackled the Ebbw player receiving almost before he had a chance to move. This received warm applause from the crowd, recognising the effort. Geraint Watkin was lively, popping a cheeky reverse pass to Henry Palmer who found Matt O’Brien. Matt put in a long kick, still using the wind, for his backs to chase, but the ball won the race to the dead ball line, unfortunately.

With added time being played, Newport had Ebbw Vale on the ropes. A ruck formed a few metres out, but the Ebbw defenders left the fringes too sparsely covered. A talent like Ben Roach doesn’t need asking twice and he delivered the knockout blow by simply skipping around the side of the ruck and dot down under the posts. Matt O’Brien added the conversion as the last action of the game making a final score of Newport 48 Ebbw Vale 10.

Newport’s next game is at home, on December 11th, when Bridgend Ravens visit the Newport Stadium. This is the first round of league games in the Indigo Group Premiership in this season’s format. Following that, Newport make the tricky trip to a buoyant Aberavon RFC who always try and play rugby in a fast, running style, not dissimilar to us; it should be a fascinating match! Both games kick-off at 2.30pm so, hopefully, as many supporters as possible will make it, wear Black and Amber and shout the boys to a win!