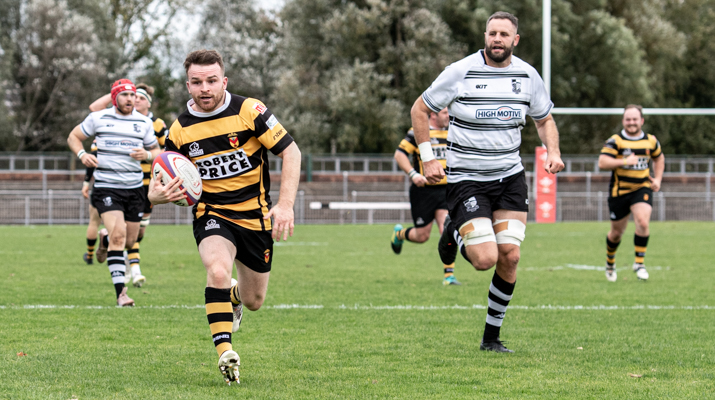 The challenges are coming thick and fast for Newport RFC this season, not just off the field. The visit of Pontypridd RFC was just the latest. The visitors have successfully defeated us twice this season already and, despite having lots of unfamiliar names in their squad, have inherited the club’s inherent ability to hang in to games and refuse to accept defeat lightly, a trait to be admired.

With the stand at Newport Stadium pleasingly full, an overcast sky and with a light, but strengthening, south-easterly breeze, Pontypridd’s Ben Burnell kicked off with Newport defending the Southern Distributor Road (SDR) end. Pontypridd were playing in a white shirt with narrow black bands, black shorts and black and white hooped socks, while Newport wore their traditional black and amber hooped jerseys.

Newport were on defensive duty as the visitors started well. A chip from Burnell caught Jonny Morris and Dai Richards in two minds, Pontypridd almost profiting from the mix-up, but the ball was, eventually, cleared. Pontypridd kept up the pressure, patiently going through phase after phase but the Newport defence was solid and, importantly, honest as zero penalties were lost during this spell. Indeed, it was Pontypridd who relaxed their grip when a ball was lost in contact. Newport kept the pressure on themselves, however, when the exit move was poorly executed, Burnell merely pinning Newport back into a corner.

With Pontypridd struggling to break into the Newport 22 a spilled ball would have had the visitors on high alert as Jonny Morris whipped a pass out to Matt O’Brien who found Oli Andrew steaming up the wing and turn defence into attack. Andrew had no chance of making the line himself, he had too much to do, but his infield kick for Luke Crane to chase certainly would have had the visitors thinking.

The defensive effort was such that a 14th minute penalty against Newport at the scrum had Pontypridd gesturing at the posts when a more confident side may have gone to the corners. Ben Burnell slotted the kick to make the score Newport 0 Pontypridd 3.

Newport responded quickly; a high tackle on Josh Reid saw Will Reed kick Newport to 30 metres out on the terrace side. Newport knocked on at the lineout but roared into action at the scrum. Jamie Jeune and Garin Harris forced the pressure, making their opposite numbers step back. As the Pontypridd scrum wobbled the ball squirted out of the side. Luke Crane, alive to the possibilities, scooped the ball up and darted for the line, around, under and, eventually, through would-be tacklers to touch down, leaving the visitors standing around looking like they’d just been mugged. Will Reed added the conversion to make the score Newport 7 Pontypridd 3 on 21 minutes.

Pontypridd clawed some of the deficit back on 24 minutes with a penalty of their own which Ben Burnell calmly slotted to make the score Newport 7 Pontypridd 6.

Newport had weathered the earlier pressure and were starting to exert some of their own. The Pontypridd scrum was in some bother as it collapsed on 29 minutes. Will Reed booted Newport forward. Pontypridd contrived to knock on, then collapse another scrum. Will Reed opted to kick the penalty, but the kick shied away from the posts. However, greater rewards were forthcoming. Ben Burnell’s kick restart went to Oli Andrew who ploughed forward, attracting a high tackle penalty as he went. Dai Richards was supporting and was encouraged to run. He almost found himself in a cul-de-sac of black and white shirts but, with the help of Matt O’Brien’s beautifully neat back-hand pass, it opened out into a broad, tree-lined avenue. Jonny Morris carried along the wing with Luke Crane sprinting infield as support. With a simple draw-and-pass, Crane was launched for his second try of the afternoon that had the stand on its feet in appreciation. Will Reed added the two-pointer to make it Newport 14 Pontypridd 6 on 32 minutes.

With the half drawing to a close and Newport gaining the upper hand, Ben Roach popped up, ball in hand, from a Pontypridd lineout that had been effectively disrupted. He sprinted off with alarming pace, outstripping the Pontypridd cover at times. With Josh Skinner in close support, Pontypridd were all hands on deck in defence.

Pontypridd had a final, unsuccessful, shot at goal with two extra minutes played following a penalty conceded by Newport. Ben Burnell’s kick from 56 metres was hopeful, at best, but a shot to nothing as the halftime whistle blew.

There was a slight delay to the start of the second half when referee, Mr Jason Bessant, picked up a leg injury and was forced to withdraw. The club wishes him a speedy recovery.

Will Reed restarted the game and soon had the opportunity to extend the lead when Pontypridd were punished for fringing around a ruck, but the ball was pushed slightly right of the posts as the breeze strengthened. Another chance popped up two minutes later as Pontypridd still hadn’t solved their scrum problems, the replacement referee appearing to take umbrage with Pontypridd hooker Nathan Huish. This time Will Reed made the necessary adjustments and scored the penalty making the score Newport 17 Pontypridd 6 on 46 minutes.

Ben Burnell placed his forwards inside the Newport 22 but Ben Roach, again emerged with the ball and, again, hared upfield turning defence into attack. Running out of options he kicked ahead, arriving at the ball at the same time as Pontypridd wing Dale Stuckey making life distinctly uncomfortable for the visitors.

Pontypridd did elbow themselves back into the game slightly. Newport infringed on 55 minutes. Ben Burnell kicked Pontypridd into position, but the Newport defence remained rigid. The referee signalled a penalty for a high tackle, so Pontypridd started again. They kept the ball well, patiently stretching the Newport defence and, following some very neat handling, managed to create room enough for wing Dale Stuckey to squeeze in at the corner. Burnell’s conversion was missed so the score now was Newport 17 Pontypridd 11 on 58 minutes.

Play began to stagnate in the middle third as many Newport supporters began to bemoan Mr. Bessant’s injury. There were some puzzling decisions being made, against both teams, to be fair, but the lack of clarity was frustrating. The knowledge that Pontypridd could easily strike and nick the win as the clock ticked was adding to the situation.

A succession of scrums, apparently being dominated by Newport, resulted in a Pontypridd penalty which was met with howls of derision from the stand. Ben Burnell launched the ball forward but George Gladding, on in the first half for Dai Richards, athletically kept the ball alive. Newport carried the ball back towards the Pontypridd defence. An almighty punch-up broke out on 73 minutes with, seemingly, the players equally frustrated. In my opinion, and my opinion alone, the referee had lost control. A consultation with the touch judge resulted in a penalty to Newport which Will Reed gratefully slotted to make the score Newport 20 Pontypridd 11 and, importantly, put two scores between the Black and Ambers and their dangerous visitors.

Further indignation occurred on 77 minutes with Will Reed taking a catch in mid-air. Pontypridd full back Morgan Richards turned and backed into him, sending Reed crashing to the ground, seemingly uninjured. Surely a yellow card offence? No, not on this occasion, just a full penalty.

Newport overcame these obstacles and triumphed, finishing with a flourish as Josh Skinner crossed for a super injury time try. Matt O’Brien found acres of space to his right. Jack Wright, a long-term injury returnee, smashed his way up the middle as George Gladding went close. This caused the Pontypridd defence to be sucked in, leaving Jonny Morris time and space to pass out to Josh Skinner, who claimed his reward for another terrific performance from him. Sadly, an unidentified Pontypridd defender appeared to deliver the cheapest of shots into Skinner’s back as he crossed and another unsightly melee ensued, the assailant’s red scrum cap being ripped clean and thrown onto the surrounding running track. Will Reed added the conversion to make the score Newport 27 Pontypridd 11.

There was time to restart as Pontypridd kicked a penalty to the corner looking for a second try. With the lineout completed, the rolling maul bundled over in the corner but was judged to have been held up and no try was given. The final whistle blew and all associated with Newport RFC could breathe a sigh of relief.

There is a break in Black and Amber action next weekend as the Autumn International series commences. Our next chance to see the boys in action will be on Bonfire Night, Friday 5th November, when we make the short journey along the A48 to see our old friends Cardiff RFC. Newport currently top the standings in the East section of the cup competition, but Cardiff are a close second, just one point behind. If ever a game can promise fireworks, it’ll be this one!

The next home game will be on Saturday November 13th when RGC 1404 visit Newport Stadium for the first time. The kick-off is at 5.30pm to enable our visitors to travel down and back in a day. Please come and support the boys, support the club, wear Black and Amber and shout us to, hopefully, another win!