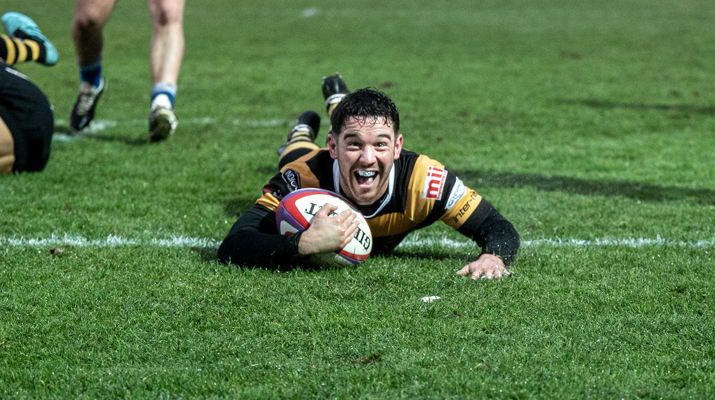 Newport’s 2021-2022 Indigo Group League season began with the visit of Bridgend Ravens to the Newport Stadium in typically wintery conditions, light rain, a gusting breeze and fully overcast skies. Bridgend games are usually tight affairs, them playing a similar style of rugby to Newport, so the Black and Ambers picked a fully-loaded team to try to ensure that the league campaign began on the right footing.

Bridgend’s veteran outside half, Matthew Jones, kicked off, going long to the corner as they attacked the SDR end. Newport returned the ball which was taken by former Newport back-rower Reuben Tucker. Tucker was snared and, ultimately, turned over, Newport gaining a penalty as they went. Will Reed, back at 10 for the hosts, booted the ball to the corner but despite good work by Messrs. Skinner, Reid and Griffiths, the visitors successfully disrupted a series of mauls and snuffed out the threat of an early score.

The Black and Ambers showed some early ambition, Dai Richards providing the rapier attack, Josh Reid the broadsword as they heaved themselves into the Bridgend half. Will Reed’s cross-kick to Oli Andrew would have been spectacular but for being about half a metre over Andrew’s outstretched grasp.

An aerial kick cannoned off Dai Richards chest and back onto the Bridgend side who quickly spotted space behind the Black and Amber defensive line. Bridgend wing Caine Woolerton gave chase but Newport centre Dafydd Smith was back to hustle the ball safely into touch. Bridgend had a perfect platform to launch themselves at Newport, rolling patiently through the phases, until second row Hemi Barnes proved over-eager and was pinged for going off his feet at a ruck, right under the sticks.

An 11th minute rolling maul by Newport looked impressive but was probably executed in the wrong part of the pitch, and for too long, as Will Griffiths split with the ball but was instantly isolated by the blue and white shirts. The resulting penalty was a gift to the visitors as Matthew Jones had no trouble executing the kick to make it Newport 0 Bridgend 3.

Newport knocked on the restart kick but won a penalty from the ensuing scrum. Will Reed booted to the corner and the powerful maul, that came from the line out, had Bridgend in all sorts of trouble as blue and white shirts seemed to be spat out of the side of the Black and Amber juggernaut. Will Griffiths had no opposition as he pounced for the try which Will Reed converted easily. This made the score Newport 7 Bridgend 3 on 13 minutes.

Newport were intent on attacking but the Ravens were proving stubborn in defence. The returning Jonny Morris was aggressive in attack, Garin Harris thundered forward, but a 22nd minute pop pass out of contact by Will Griffiths was too low for Rhys Jenkins to gather.

Newport conceded a 26th minute scrum penalty which Bridgend’s Matthew Jones kicked to the corner. Thankfully for Newport, the visiting pack fluffed their lines allowing Elliot Ferriman to pick off the lineout ball easily and begin the work of clearing their lines. A kick saw Bridgend regain possession, but a pass left from scrum half Harri Morgan was so long, and so flat, that it evaded everybody except Matt O’Brien. He seized on the opportunity and dinked the ball in behind the Bridgend back line, prompting full back, and former Newport player, Ed Howley to cover. He was soon flooded by Black and Amber shirts and conceded a penalty for holding on in the tackle. Newport went to the corner but were denied when Reuben Tucker, the Bridgend 8, cunningly positioned himself in the maul to block the ball’s exit and win his side the turnover.

Bridgend’s next opportunity came about on 33 minutes after their lineout had functioned poorly again. Ben Roach snaffled the loose ball, but, as Will Reed booted the ball away, Newport were pinged offside by the referee, Mr Steff Edwards. Matthew Jones lined up the simple-looking penalty to make the score Newport 7 Bridgend 6.

Will Reed’s restart kick went straight into touch, but his mates in the forwards sorted that out by gaining a penalty from the restart scrum. Will Reed ran with the ball, Dafydd Smith picking good running lines in support. Prop Jamie Jeune was up with play to pop the ball out to wing Oli Andrew but his pass out of contact ended up with Ravens no.4 Hemi Barnes and they could kick clear. Newport ran back, Dai Richards, not lacking in confidence, arced right, looking for space and finding it but, crucially, holding onto the ball for half a second too long before releasing Jonny Morris who was nailed by the Bridgend cover defence. Newport moved the ball back infield but were lacking in bodies as Bridgend hooker Gareth Harvey challenged for the ruck ball and won the penalty. It’s common knowledge now that Newport like quick ball so teams are facing them and doing their level best to deny that. Bridgend, it seemed, had done their homework better than most. Newport compounded the situation by chopsing at Mr Edwards, something that never, ever pays dividends and he, rightly, walked Newport back a further ten metres and put Bridgend into ‘kickable penalty’ territory. Matthew Jones wasn’t about to turn that down and took the opportunity to make the score Newport 7 Bridgend 9 on 40minutes.

Will Reed restarted the game but Bridgend scrum half Harri Morgan simply hoofed the ball into touch to bring the curtain down on the first half.

My handwritten notes, at this point, simply say “Boys need a rocket under them at half time”.

Will Reed restarted and Dai Richards was soon running with ball in hand again. Bridgend’s Reuben Tucker conceded a penalty, seemingly just for being a nuisance, allowing Newport to go to the corner again. Newport rumbled on, Bridgend desperately trying to halt the maul, but it was too powerful, too much intensity, to stop, and a group of Black and Amber jerseys flopped over the Bridgend line. Mr. Edwards took his time, consulted with his assistant, then awarded Newport the try which has been credited to Josh Skinner. Will Reed added the two-pointer to make the score Newport 14 Bridgend 9 on 42 minutes. The rocket, seemingly, had landed.

Oli Andrew put in a smart 46th minute kick into space which had the Newport defensive line rush up and halt Bridgend before winning a penalty. Will Reed put his team to the corner again and Newport built through the phases. Bridgend were penalised in defence prompting Matt O’Brien to gesture at the posts and build a lead. Will Reed slotted the kick to make it Newport 17 Bridgend 9.

A beautiful 50:22 kick from Matt O’Brien on 51 minutes was noteworthy as it put the Black and Ambers in a position of great potential, but the visitors were doing really well at slowing everything down and making Luke Crane work for the ball at contact situations.

Newport won a 56th minute scrum penalty and went for the usual route to the line. Josh Skinner won the lineout ball and Newport tried to move it around. The wind was gusting slightly harder now and the rain was sheeting across the floodlight beams, making handling trickier. Regardless, Newport were intent on pressing and the ball reached Oli Andrew who dived at the line but was tackled into the corner flag by desperate Bridgend defence.

Bridgend were far from out of the game and were trying to create when a pass back from Harri Morgan to Matthew Jones was hopelessly low. Jones can be forgiven for knocking the ball forward. However, one of his colleagues saw fit to vent his frustration by chopsing, which Mr. Edwards treated the same as the earlier transgression by Newport and converted the scrum into a full penalty. Will Reed slotted the three-pointer and effectively put the game beyond Bridgend’s grasp. The score now, on the hour, was Newport 20 Bridgend 9.

Newport replacement Cameron Lewis made his presence felt as his bashed his way up field. Newport worked hard to keep the ball alive until a two-on-two situation emerged with Matt O’Brien, ball in hand, and Josh Skinner in support facing two Bridgend defenders, left field and about fifteen metres out. A show of the ball by Matt O’Brien, and a turn of the hips and, suddenly, a gap opened for him to skate across for a well-taken, and richly deserved, try. Will Reed couldn’t capitalise, so the scoreboard now read Newport 25 Bridgend 9 on 64 minutes.

There was time enough to go hunting for a try scoring bonus point. Geraint Watkin, on for Luke Crane, appeared to go close on 73 minutes but was penalised for, it seemed, a double movement. The game was slowly petering out as conditions gradually deteriorated. A hamstring injury to influential loose forward Ben Roach was unfortunate as the bench had been emptied, so Newport were having to play on with fourteen players.  Matt O’Brien almost provided a spark with a cheeky chip kick which he sprinted through on to, gathered, but found too little support to reap rewards. Newport kept pushing but without result as the play became more Keystone Cops than All Blacks. With little stoppage time played, Mr. Edwards blew for time and Newport’s league campaign was up and running.

Newport RFC are next in action on Saturday December 18th when they make the journey to Port Talbot to face Aberavon RFC at the Talbot Athletic Ground. This is a mouth-watering fixture as both teams seem very well matched. It should be a (Christmas) cracker! This is the first of a run of three consecutive away games. Following this, the club travel to Ebbw Vale on Monday December 27th. This game has been selected to be broadcast live via S4Cs ‘Clic’ YouTube channel for those that are unable to make to journey. Then it’s Monday January 3rd 2022, when we face the Whites of Swansea at St. Helens. Three intriguing fixtures, I’m sure you’ll agree.

Newport’s next home fixture is on Saturday January 15th 2022 when Merthyr are our visitors in a league game. We hope to see as many of you as possible there, wearing Black and Amber and cheering Newport on!

Newport RFC Man of the Match – Will Griffiths