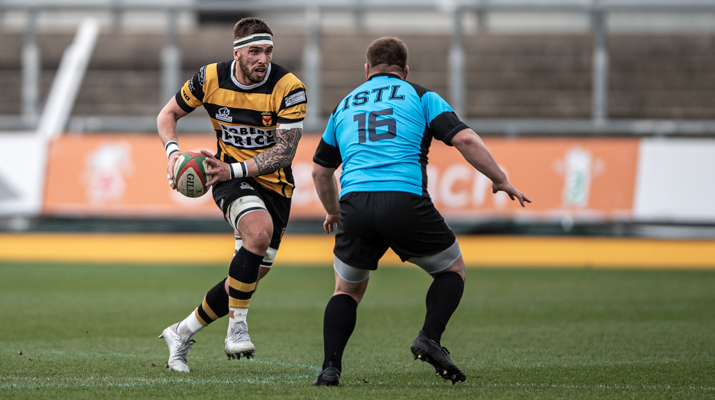 The dominant victory against Cardiff appears to have come with a heavy price. The amount of Newport RFC players out with injuries appears to be reaching critical mass, so much so that the club were forced to shuffle the pack, literally, to field a team against the Whites of Swansea. The forwards were comprised of two props and six loose forwards, essentially. Our thanks to the Dragons must be recorded for their assistance on this front; without this help, things would look very different.

This was a proper potential ‘banana skin’ fixture; Swansea’s lowly league position belies the fact that they have run some good teams very close recently. With an unsettled team, Newport being top of the ladder was surely motivation enough for the Swansea squad to have a go at the Black and Ambers.

Swansea, in their traditional white kit, defended the Town end as Will Reed kicked off into the clear night air. Swansea looked to move the ball away from the Newport forwards, but a lively run from winger Llien Morgan was dealt with comprehensively by Newport’s Ioan Davies. Newport went about trying to create something but were penalised for side entry at a ruck. Swansea number 10, James Davies, took a shot at goal but pushed his kick to the right of the posts.

Newport took a long kick to the corner following a penalty award and set about mixing the play up. From drives at the line, the backs utilised a mix of short and long passes, keeping the Whites defence guessing, and a few darts through confined spaces. Determined driving took the Black and Ambers within touching distance of the line, but a strong Swansea arm ripped the ball clear of the ball carrier and the threat was over.

Newport were still being given the opportunity to attack but the passing became slightly laboured until Ioan Davies found himself isolated on his wing and conceded a penalty for holding on. Andrew Mann, however, got a hand to the resulting lineout ball and Newport could go again. Che Hope whipped the ball away to the backs as Jonny Morris and Deon Smith reacted quickly and moved forward. The ball was kicked ahead with a narrow angle, ensuring the Swansea defender was likely to end up in touch. With the lineout won, Matt O’Brien took a quick look inside his magician’s bag-of-tricks, jinked, and came out with a low slung, long pass, which cut out the defence and allowed Ioan Davies to sprint in for the game’s opening try, launching through the last, desperate defender as he did so.  Will Reed pushed the conversion wide to make the score Swansea 0 Newport 5 on 15 minutes.

Swansea had a second unsuccessful penalty shot on 16 minutes following a scrum. This time James Davies pushed his kick to the left of the sticks.

The Whites were proving to be far from the lower table fodder that some would have you believe. Newport were having to work hard in defence as James Davies put in a nice, long pass to wing Llien Morgan who had second row and Captain, Matt Dodd, striding up in support. Dodd made it into the Newport 22, but a strong counter-ruck saw the ball won back for Newport.

Lennon Greggains, back in a Newport shirt after a lengthy absence, was back to his usual standard, skipping through tackles like a bulldozer as Newport streaked forward. The intention was clear; make Swansea cover every blade of grass in defence as long, raking kicks kept their back three in place.

Swansea upped their attacking tempo on 29 minutes when a pass out to flanker Billy Moxey appeared to have been knocked on. Not so, said referee Elgan Williams. James Davies looked for options and found them in centres Charles and Dirksen. Dirksen took a hit off the ball, giving the Whites a penalty advantage, but the Newport defence stayed firm, and Swansea opted to go to the corner. Josh Reid rose highest and claimed the lineout ball as if it were thrown to him intentionally and Newport could clear, after a fashion. However, the lineout was horribly overthrown, and Swansea could resume their attack. Matt Dodd powered through the Newport defence while Kieran Charles punched his way forward. Newport infringed again but, oddly, Swansea showed little stomach to go for the try and opted for a penalty kick which James Davies successfully slotted to make it Swansea 3 Newport 5 on 34 minutes.

Newport restarted, Will Reed kicking long, Swansea won the ball and worked hard to open up a gap. Scrum half Connor Tantum box-kicked ahead for wing Josh Carrington to chase. Carrington won the aerial ball, spun and found a yawning chasm of open space ahead. A jink, and a clear run under the posts was the outcome. James Davies added the conversion to make it Swansea 10 Newport 5 on 35 minutes.

Newport performed another strong counter-ruck to regain the ball allowing George Gladding to enter the line and gallop along the wing before being hauled down. Che Hope kicked ahead but Swansea pumped the ball into touch to end the half leading the league table-toppers.

James Davies restarted for the Whites, while George Young took Andrew Mann’s place in the second row. Matt O’Brien put a monster kick in for Swansea fullback Gareth Rees to chase while Deon Smith pressured him. Rees’ kick spiralled into touch just 10 metres out from his own try line. Matt Dodd, the Swansea captain, disrupted the rolling maul, but Newport kept pressing the line. Swansea failed to release in the tackle so, with presence of mind, Che Hope took a quick tap penalty, popped the ball to the menacing Lennon Greggains who barged across the line for Newport’s second try. Will Reed added the conversion to make the score Swansea 10 Newport 12 on 42 minutes.

Whites’ number 8 Ben Williams made a terrific 47th minute break, cutting Newport apart. Billy Moxey was rapid in support, picking up from the base of the ruck and barrelling across the line, only to be held up by Newport hooker James Benjamin. From the goal line drop-out, Swansea upped the tempo again, James Davies selecting a range of passes before making a break himself. Connor Tantum, his inside -half, was in support but was hauled down perilously close to the line. Swansea were inching closer until flanker Callum Bowden appeared to have scored; he hadn’t because George Young had strayed offside ending up with him being invited to cool his boots for ten minutes.

The Newport defence dug in and became massively belligerent. Swansea pressed on with a determined attack but the pride in the Newport line was evident.

Newport claimed a 58th minute scrum penalty to ease the pressure somewhat. George Gladding was brought into the line again, sprinting to about 30 metres out on the terrace side, but was alone and conceded the penalty for holding on to the ball. Superb work from his mates in the forwards, however, won the ball back as the Whites’ ball carrier was held up in the maul.

No sooner had George Young resumed his place in the team, Jonny Morris found himself on the end of a yellow card decision. From another scrum penalty, Will Reed’s kick took Newport deep into Swansea territory. Matt O’Brien’s kick was mis-hit as it spiralled backward, rather than intended cross-kick. In his haste to regain possession, Morris’ tackle was clumsy rather than intentional as he made contact with a Swansea head. The home supporters, predictably, were baying for a red card but Mr Williams was satisfied that yellow was enough.

Swansea were still attacking but seemed to have run out of ideas, seeming happy to go side to side across the Newport 22. They drifted around, making it easy for the Newport defence to marshal them towards the touch line. They even managed a decent overload of numbers on their right at one point, but a loose pass did the Newport defenders work for them.

Ben Roach, on for Josh Reid, predictably caused chaos when he entered the field. He charged down Liam Seaward’s attempted clearance on 72 minutes, collected the ball and stormed into the Swansea 22. Matt O’Brien and Jack Brooks interplayed but the ball came low to Che Hope who knocked the ball forward and the chance was gone.

10-12 wasn’t enough. Swansea had too much to gain by settling for that. On 76 minutes that deadlock was broken as replacement prop Owen Thomas broke a Newport tackle and sprinted forward, mullet flowing in his wake. Liam Seaward was quick in support, Billy Moxey set up the ruck while Hanno Dirksen arced right for Seaward to take the last pass and dive over for a well-taken try. Liam Popham added the conversion to make it Swansea 17 Newport 12.

Then Swansea imploded. The restart was botched by them as it cannoned off the breast of Hanno Dirksen. Newport remained calm and stuck to their strengths. Patiently they built through phases, edging Swansea backwards, sucking the white shirts in. Drive after drive, as many as it took to make a gap until it appeared, on the right, as Matt O’Brien took the pass and dotted down in the far corner, evading the challenge of Ben Gregory, the Whites second row. With Will Reed off the field and O’Brien now operating at ten, he took the conversion which took him to fourth position in the Newport all-time scoring chart, ahead of the hallowed Norman Morgan. Congratulations Matt! The score now was Swansea 17 Newport 19 and normal time was up.

Matt O’Brien kicked long and, as the ball rolled into the Swansea in-goal area, Gareth Rees, the Whites’ full back, inexplicably dithered while Jonny Morris pressured him. He was forced to touch down and concede the goal line drop out. Matt O’Brien tried a speculative drop goal but that sailed wide. With a 22 drop out restart, Swansea managed it poorly, the Swansea chaser missing the ball altogether. Ioan Davies took it, sprinted off, kicked the ball around the last defender, regathered and dived jubilantly in the corner for the try-scoring bonus point and sealed the toughest of wins.

Newport RFC are back in action next Saturday when they line up in the Cup Semi-Final against Cardiff RFC. This game will be staged at Sardis Road, Pontypridd RFC’s ground, of course. The Friends of Newport Rugby are running a bus for supporters to the game. If you would like to reserve your seat, please email Steve on stattonrfc@live.co.uk.

Back to Indigo Group Premiership action and we have to wait until Sunday April 3rd for the visit of RGC to Newport Stadium, kick off at 2,30pm, then we await the visit of Merthyr RFC on Thursday April 7th. This game will be streamed live on S4C’s YouTube platform, Clic, which is lovely, but we’d much rather you were at the game. Come along and support the Black and Ambers!