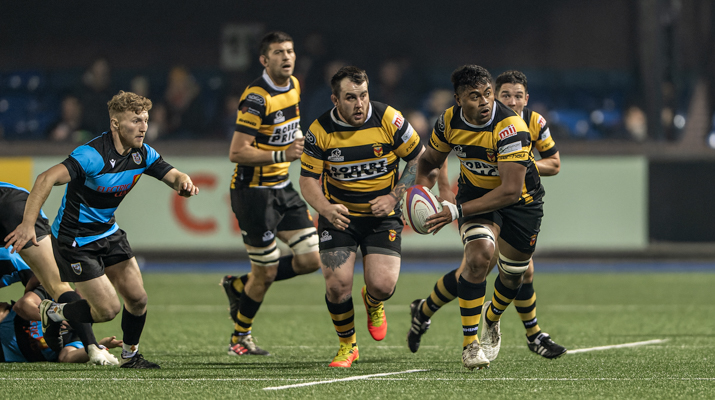 Cardiff v Newport is one of the most famous derbies in our game. For over 145 years, it has been the highlight of any calendar, so it didn’t need a Bonfire Night fixture to bring some fireworks to the Arms Park.

The 440th clash between these two old foes was brought forward due to the international fixture next door the following evening, however it will take quite the show at the Principality Stadium to beat this one for entertainment value.

The Black & Ambers were on an impressive run of five straight victories, which began back in late September when Tyron Morris’ men bravely battled to edge out this evening’s hosts at Rodney Parade. The Blue & Blacks had had an impressive start to the season too, with only a defeat at Newport and Merthyr tarnishing their campaign thus far.

It didn’t take long for the capital city side to begin the night with a bang. Within the first few minutes, Theo Cabango, brother of Wales football international Ben, set off like a firework through the B&A defence, flying 50 metres through the bewildered backs to cross over and open the scoring. Full-back Jacob Beetham added the extras.

Soon after, Newport came close to an instant reply. The forwards seemed to have driven themselves over the try line at the Westgate Street End, and most of the crowd thought the same too. However, referee Rhys Jones, a familiar face to some B&A fans, decided a double movement had occurred.

After Beetham’s attempt with the boot went wide, the Blue & Blacks did manage to increase their lead soon after the 10-minute mark. A typical Matt O’Brien chip-kick landed straight into the hands of an opposition defender, leading to a swift counter-attack and completely exploiting the B&A defence. This move was finished by Tom Hoppe, who has previously appeared in a B&A jersey, to double his side’s lead.

The visitors got a piece of the action themselves a little later. A lineout in the Cardiff ‘red-zone’ gave them the green light to drive forward, and drive forward they did. Jack Wright, fresh from a try-scoring appearance for Crawshay’s nine days ago, received the credit for some robust forward play to earn his first five-pointer in Black & Amber. Captain O’Brien, back on kicking duties this evening, contributed the first points of his perfect record on the night.

He soon doubled his team’s total by himself, and doubled his own try tally for the season. His cross-kick from inside the Newport 22 was grabbed and well-kept in play by substitute Mathew Powell, which sent Dafydd Smith racing to gain some valuable ground. That move eventually led to the outside-half barging over in the corner and converting an equally impressive two-pointer.

With over 10 minutes of injury time due to various stoppages, there were plenty of chances at both ends to increase the score. Cardiff had seemingly crossed over almost instantly before another double movement was ruled by the referee. Newport also had plenty of set-pieces deep in opposition territory to gain an advantage at the break, but all opportunities fell short and the two rivals had to settle for a level first half.

Cardiff opened the second period scoring with Beetham’s boot, before a second Matt O’Brien try resulted from a typical lineout move on the hosts’ 5-metre line. His conversion then gave the B&As the lead for the first time on the night.

With ever-increasing Blue & Black pressure, Newport had managed to halt that momentum, earning a turnover scrum dangerously close to their own try-line. However, a misfeed gave the hosts the freedom of their city to spread the ball wide and dive over for their third try of the night. Beetham finished off the move in the corner, but failed to convert his effort with the boot.

They soon had another similar opportunity at the opposite corner when Cabango thought he had further extended the lead. A superb defensive effort in the corner, however, put the dangerous winger marginally in touch. With that, the replacements came rolling. This included a first appearance in B&A for Viliame Kotobalavu, and it didn’t take long for the new recruit to make an impact.

Five minutes after Beetham’s penalty kick extended Cardiff’s lead to four points, the Black & Ambers’ determination to get back into the game was evident. They set-up camp in their opponents 22 and put in effort after effort to push over the line and earn what would be a fantastic, and rare, win on the patch of one of the best sides in the league.

After threatening the end-zone with both forwards and backs, their courageous endeavours finally paid off in injury time, when Kotobalavu broke the resilient defence to earn himself a debut try and his new side an impressive fourth try of the night. O’Brien added the last of his 18 points to cap off a bonus-point win and end a memorable night for all involved at our historic club.

The B&As have earned their first victory in the capital for almost 10 years, and are now on a six-game winning streak. With fine performances tonight and throughout the season, and many top-quality players soon to return, they show no signs of breaking that run anytime soon.

Next up is the welcome of RGC 1404 to Newport Stadium next Saturday (13 November) at the later time of 5.30pm. The B&As have already been to North Wales this season and come home with a win, so they’ll be heading into this match full of confidence and hoping to complete the double and extend that excellent run of form in front of the vocal and ever-present Black & Amber wall. Join us next week and get behind Your City, Your Colours, Your Club.