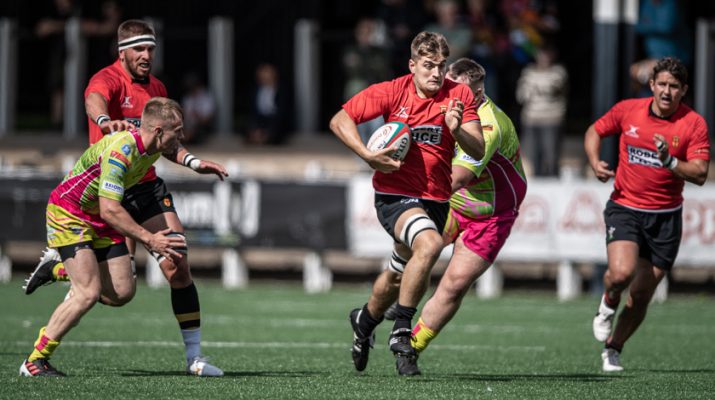 After a mere 532 days of waiting, the Black & Ambers were back in action.

Pontypridd were the opponents and Sardis Road the location, just as it was 76 weeks ago. Of course, the long pause meant the B&As had been on a 3-match, near-19-month unbeaten run! 2 home wins against Ebbw Vale and Swansea kick-started 2020, and who could forget our previous match on leap year day in 2020? It was a memorable win at Sardis Road in the Indigo Group Premiership, our first competitive victory there in almost 15 years.

Throughout much of the match, Newport were looking on course to repeat such a feat and had led for most of four periods of 20 minutes played this afternoon. Pontypridd used the game to trial around 40 different players, whereas as ‘Port took a squad of just under 30. There were the same old faces, a few of our new faces, and an array of completely unfamiliar faces on permit joining the squad for the day from an array of clubs in South Wales, all of which had a chance to show what they could offer.

The first 20-minute period was largely uneventful; however, it didn’t take long for a member of the Black & Ambers (playing in red this afternoon) to find himself in the sin bin. Will Griffiths, a mere 10 minutes into his debut, was gifted his second 10 minutes on the side-line for what seemed to be a tackle off the ball.

After returning to full strength, the B&As opened the scoring. A Pontypridd dropped ball in the middle of the park ignited a charge from the away side, which eventually saw Lewis Smout barging over for only his second ever try for the club. New captain for the season, Matt O’Brien, added the extras for his first of 4 points.

‘Port had plenty of chances to stretch their lead, but it was Ponty who replied just before half-time, driving over from a lineout deep in the red zone. Their missed conversion, however, kept them trailing. The chances kept on coming for the B&As, but the pre-season cobwebs were taking its toll. A collection of crooked lineouts, forward passes and penalties were racking up, putting an end to any hopes of a score, sometimes before an attack could even begin.

Just before the half-time whistle, though, another debutant made the spotlight, but this time on a positive note. A good series of passes from Newport sent in former Cardiff centre, Jack Brooks, in for his first of, hopefully, many tries in his new colours.

The match was a good opportunity to familiarise ourselves with a few of the new laws. One of which was the new “50:22 rule”, which awards a team an attacking lineout if they are able to kick the ball from within their own half out inside the opposition 22. O’Brien, successfully took advantage of this new law on a number of occasions, adding to what is already an impressive set of skills. There is no doubt we will see plenty more of this from him during the campaign.

He also reminded us of his famous flare, which included his staple chip kicks and no-look passes, and these lead to a number of attacks for the B&As, though errors and countless needless penalty concessions were quick to put an end to chances of any further scoring.

George Gladding, another new recruit who had shone thus far, found himself in the sin-bin too during the 3rd period, this time for a no-arm tackle after an impressive 50-metre dash from a Ponty attacker. This was to prove costly, as an attack from the home side lead to a robust charge by their forwards which eventually crossed over for their second of the afternoon.

Heading into the final period of the match, we were seeing more new faces than familiar ones in Black & Amber, and new number 8, Ben Roach, was making a name for himself, being a centre point of a small “physical disagreement” between both sets of players. Surprisingly, we waited 70 minutes for this first and only scuffle of the match.

It was Pontypridd, however, who had the last laugh, crossing in the corner with minutes remaining on the clock. Having lost the battle of possession and territory over the four periods, this was the only occasion Ponty had taken the lead, and they managed to cling onto that 3-point lead until the final whistle to completely shut out Newport during the second half.

There are plenty of positives to take from this game, with new faces putting in solid performances and familiar faces reminding us of what we’ve been missing. The B&As will be bolstered by the return of some more of the latter when they head westwards to face an exciting Swansea University outfit next Saturday (21 August, 2.30pm). See you there!