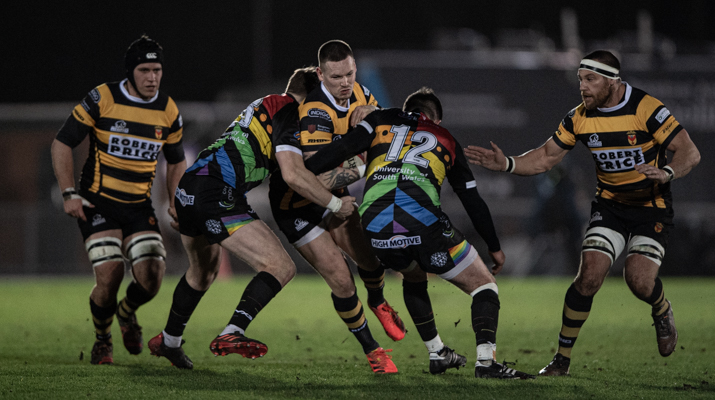 This match was unusually played on a Thursday evening at the Newport Stadium following a request that the match be broadcast via S4C’s Clic YouTube platform. With the cessation of Storm Dudley, and the imminent onset of Storm Eunice, for which the Met Office had issued the severest of warnings, a red, indicating danger to life and property, the game was staged in the literal, calm before the storm.

The enforced break since the Llandovery game has done Newport some good. It has allowed some injured players to recover, especially Josh Skinner and Ben Roach, both of whom have been outstanding for Newport RFC this season.

There was a half-decent crowd, bearing in mind that it could be watched from the warmth of one’s living room, the chill evening, and the potential for travel problems ahead. Indeed, the lack of Pontypridd supporters was notable; apparently it was the first time that they had not brought a supporter’s bus to an away game in many seasons.

Pontypridd took to the field in their ‘rainbow’ NHS shirts, which are actually much easier on the eye than the description sounds, whilst Newport wore brand new Black and Amber jerseys.

Will Reed kicked off for Newport, with them attacking the SDR end, Pontypridd returning that kick for a line out. Newport went in hard, Dafydd Smith setting up a ruck out wide before Newport moved the ball back infield. Cameron Lewis received the pass and, spotting a mismatch with Pontypridd second row James Little, arced around him easily, fended a challenge from flanker Kris Parker before passing the ball to Luke Crane, sprinting to his left, for a splendid opening try on just 53 seconds. Will Reed added the conversion to make the score Newport 7 Pontypridd 0.

Newport had started well and a smartly taken 50:22 by Will Reed set Newport up again for an attack. Following two powerful phases, unfortunately Luke Crane mishandled the ball when he collided with an outstretched leg of one of his own forwards.

The Black and Ambers shipped a 9th minute scrum penalty. Pontypridd kicked themselves up to the Newport 22, but Josh Skinner demonstrated his aerial prowess by getting a hand to the ball and knocking it back. Will Reed booted it long, but it was partly charged down by outside half Jacob Lloyd, oddly wearing jersey 26, meaning that the entire Newport pack were onside. Will Griffiths picked the ball up cleanly and sprinted, setting up a ruck for Will Reed to kick Newport onwards again but the visiting defence had regrouped and dealt with the situation.

Pontypridd were brisk in defence at times, catching Newport out and making them force the pass, but a tackle on Elliot Frewen, by number 8 Joe Miles, was picked up by TMO Adam Jones as a head-on-head collision ensuring that the visitors would be a man down for the next ten minutes.

Cameron Lewis was a proper weapon in attack, strong and direct, making Pontypridd concentrate on him whenever he had the ball, often having to tackle him in pairs. He found a gap on 15 minutes but, unfortunately the pass out to Elliot Frewen was slightly late.

Ceri Morris, the Ponty centre, was penalised for taking out Dafydd Smith mid-air on 20 minutes. Will Reed put in a superb penalty kick to place his team in a promising position. Ben Roach caught the ball at the tail of the line before Luke Crane spread the ball wide. Playing with a penalty advantage, Matt O’Brien’s pass out was too soft and intercepted. The referee, Mr Ian Davies, brought play back and Newport reset the lineout, keeping it tight this time. The powerful rolling maul appeared to have paid dividends but Mr Jones, sat in his outside broadcast van, picked up a knock-on in Louis Jones’ grounding and disallowed the score. However, with another penalty coming, Newport could make sure third time around. Newport drove hard at the Pontypridd line before Luke Crane picked out Rhys Jenkins who bullied his way across the line to touch the ball down. Will Reed added the two-pointer to make the score Newport 14 Pontypridd 0 on 24 minutes.

Joe Bartlett got in on this lineout stealing lark. Matt O’Brien hoofed the ball long forcing the Pontypridd back three to combine to defend. However, winger Dale Stuckey took responsibility and got nailed and stripped. Will Reed put in a cross kick for Dafydd Smith, but it was too long for him and went harmlessly to touch.

Unfortunately, hooker Will Griffiths sustained a leg injury while tackling and was forced off, capable reserve Henry Palmer taking his place.

Newport became clinical. Cameron Lewis set up an attacking platform and the big Newport forwards were going into contact well, often getting beyond the tackle, until Matt O’Brien carved a gap through the Pontypridd defence and, almost nonchalantly, picked out prop Louis Jones running hard in support who dived in to score. Will Reed’s conversion struck the right hand upright, bouncing out, so the score on 34 minutes read Newport 19 Pontypridd 0.

The visitors were trying to construct an attacking platform of their own, but inaccuracies prevented them from doing so. A scrum, seemingly well won, was fumbled by scrum half Joel Raikes. Luke Crane was all over him like a cheap suit and hacked the ball long. Pontypridd were, in truth, keeping pressure on themselves.

Approaching half time and Ponty finally secured a foothold in the Newport 22. The Black and Ambers defended vigorously and denied their visitors any more territory than was necessary until a penalty finally took them to a scoring position. Jacob Lloyd punted Pontypridd to the corner for second row Chris Dicomidis to secure the ball. A rolling maul formed but outstanding defence, particularly by Joe Bartlett, saw him get an arm around the ball and drag it away from the line for a turnover

Ponty weren’t done, however. A super pass out to winger Stuckey saw him dance his way deep into the Newport 22. With a stream of penalties going against Newport, it seemed that a yellow card was imminent and so it proved, as Kyle Tayler, as dogged as they come in defence, was penalised for illegal binding at a maul, and was invited to take his place on the bench for ten minutes. Pontypridd, sensing an opportunity to score, went to the corner again. Sadly, for them, they spilled the ball. Newport seized on this and, playing heads-up rugby, burst out of defence, carrying to halfway before Matt O’Brien kicked long to really put the Newport cat amongst the Ponty pigeons. Fullback Morgan Richards was home alone and quickly swallowed up. Pontypridd then failed to defend the ruck well enough as the strong counter-ruck regained possession. Luke Crane whipped the ball right and it was Dafydd Smith who was the beneficiary, lurking out on his wing. The ball had gone ‘coast to coast’, as the modern rugby vernacular has it, and Newport had secured the try-scoring bonus point before half time. Will Reed can be forgiven for missing the tricky conversion and the score, on 40 plus 8 minutes injury time, was Newport 24 Pontypridd 0.

Pontypridd restarted affairs with Newport still down to 14 players. Instantly, a difference could be seen in their intent. Flanker, and captain, Kris Parker lunged through a gap in defence to make ground allowing their half backs to work the ball right, only for Dale Stuckey to kick the ball dead and gift Newport a dropout.

The visitors kept up the pressure, Chris Dicomidis well to the fore with his enthusiastic carrying. Morgan Richards joined the line well, only for his pass to Stuckey to go forward.

With Kyle Tayler back on the field, it wasn’t long before Newport were back down to 14 when Dafydd Smith strayed offside in a defensive situation. Pontypridd had taken to attacking along the flanks, sensing little change from the middle of the park. A run by wing Cole Swannack ended with Elliot Frewen dumping him into touch, while a surge by Ben Stephens ended in some hooker-on-hooker action as Henry Palmer did similar. Pontypridd were distinctly more threatening in attack but couldn’t manage that final push to break the solid Black and Amber wall.

Elliot Frewen showed up well in defence again on the hour as a tackle by him saw a final pass to Swannack go forward out of contact.

Newport finally broke out of defensive ardour on 65 minutes when a fumble by Ceri Morris saw Will Reed hoof the ball up field for Josh Skinner to chase. Skinner was penalised for pushing a defender out of his way, despite the defender altering his path to block Skinner, seemingly. As Pontypridd tried to launch another attack, Matt O’Brien timed his run perfectly to pick off a pass and sprint to the line with Dale Stuckey in hot pursuit. O’Brien managed to ground the ball, despite the attention and, after checking with the TMO, the try was awarded. Will Reed nailed the two-pointer to make the score Newport 31 Pontypridd 0 on 66 minutes.

Newport were utterly heroic in defence, last ditch tackles keeping the visitors score to zero. Ironically, it was from a Newport mistake that they eventually did manage a consolation try. As the Black and Ambers looked to progress forward, a pass from Cameron Lewis was picked off by Dale Stuckey who sprinted, unchallenged, under the posts. To be fair, if any Ponty player looked like they deserved a score, it was him. The conversion was scored making it Newport 31 Pontypridd 7 with 82 minutes played.

With the game broken up and time almost exhausted, there was one last roll of the dice. Will Reed kicked ahead for Matthew Powell, on for Frewen, to chase. Ponty wing Cole Swannack made a hash of his defensive duties and the ball bobbled cruelly away from him and over the try line. Powell regathered himself and dived for the touchdown. Will Reed’s conversion was wide making the score Newport 36 Pontypridd 7 on 84 minutes.

Play restarted at Pontypridd, playing for pride, launched a last attack but the knock-on when they were in the Newport 22 was emblematic of their evening.

Newport RFC are in Indigo Group Premiership action next Thursday 24th February when they make the journey up the valley to face Ebbw Vale RFC. There is a supporter’s bus going, so if you’d like to join us, please email Steve Bennett on stattonrfc@live.co.uk to reserve your seat. Otherwise, like this game, it’s being shown live on S4C’s Clic channel on YouTube. Following this, the boys are away at Llanelli RFC on Sunday 6th March. Likewise, a supporter’s bus is being run, again organised by Steve. Contact him if you’d like to travel with us.

The next Newport RFC home fixture is on Saturday March 12th when we face Cardiff at our ancestral home of Rodney Parade. Kick off is at 2.30pm and we’d love you to join us!