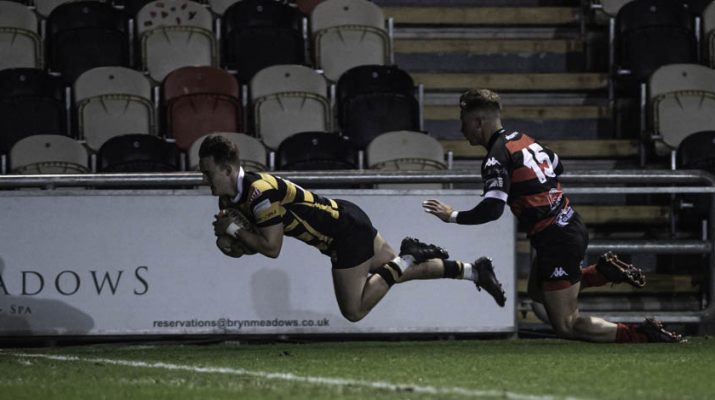 After a season and a half of top quality Friday night (and the occasional Saturday night) Premiership rugby on BBC Wales’ Scrum V Live, but with a notable absentee to their list of fixtures, this was Newport’s first chance to shine in front of the cameras under the bright lights of Rodney Parade.

Aberavon were the visitors to town with a strong record already this season, winning 7 of their 11 league games so far this campaign and sitting 3rd in the ladder before tonight’s clash. All eyes were on BBC 2 Wales in what was the Black & Ambers’ first appearance on its flagship programme for 17 years.

This was never going to be an easy match, but after securing the double over Bridgend last week when Matt O’Brien slotted home a penalty with the final kick of the game, Newport had a bit of confidence and momentum going into this one, and similar to last week, it was first blood to the B&As.

Harri Lang used his initiative well picking up a loose ball near the touchline and racing 60 metres to beat the Aberavon defenders and dive over in the corner giving his side an early 5-0 lead. Although it came at a brutal cost.

Earlier, with less than 2 minutes gone, Newport suffered a huge blow when Jon Morris, usually one of the more trusted tacklers in the team, went in awkwardly on a tackle and was forced to leave the field early with concussion. Hopefully it won’t be too long until we see our ‘Ninja Warrior’ back in action. But a Matt O’Brien penalty around the quarter of an hour mark gave the B&As a bit more hope and extended their lead to 8-0, which would last until the half-time whistle. Afan’s Aled Thomas, once of Newport and the Dragons, had a couple of opportunities himself to open his team’s tally but his rare misses left the Wizards scoreless at the break.

With the game being televised, we also had the privilege television match official, or TMO, present, and it was certainly a welcome addition to the clash when Joe Bartlett was originally deemed to have committed foul play in the ruck, but replays showed it was actually Afan’s Thomas who committed the foul. Penalty to the home side as a result.

Newport’s robust defence was another reason the visitors were held pointless at the half, which included a couple of certain try-saving tackles. Ashton Evans, a former intern at Newport RFC, found a gap in the backline and fed his colleague Ben Thomas before Kyle Tayler’s heroic behind-the-back tackle stopped him in his tracks with 5 metres to go. Another important stop came from Dai Richards, when Chay Smith’s darting run was destined for Aberavon’s first points was stopped agonisingly just short. Newport fans would, of course, be familiar with Smith’s talents, with the centre having started all 30 league games for the B&As last season: a rare achievement in the modern-day game.

Some more big hits included that of Joe Bartlett and Andrew Mann on the Aberavon backs, limited their opportunities and confidence in attack and also limiting their half-time score to nothing.

The first points of the second half came early when Aled Thomas slotted home a penalty in front of the sticks with his third attempt of the evening, and the Newport defence would be tested on many occasions, as a few minor mistakes would pile major pressure on the home side.

The scrum was an issue for the B&As during most of the match and, after a few warnings from referee Ben Breakspear, Tom Piper was forced to spend 10 minutes in the bin as a result. That error would eventually lead to a costly penalty try for the visitors which would take them into the lead for the first time in the evening. That was especially frustrating as that scrum 5 was awarded after a potential Afan knock-on was ruled out and a wild kick towards Newport’s dead-ball area was deemed by Breakspear to have been touched in-flight by Morgan Burgess.

One of the highlights of the evening, which unfortunately wasn’t picked up by cameras, was an unexpected, and somewhat confused, streaker on the pitch. During a short stop in play, Phil Steele entered the field to grab a quick interview with one of the Aberavon backs, however his cameraman was reluctant to follow suit and the ex-Newport back turned broadcaster was left stranded in the middle of the field desperately figuring in which direction he needed to run off before play restarted.

Having secured a win for the B&As last week at Bridgend with the very last kick of the game, Matt O’Brien had another opportunity to repeat this feat with an injury-time kick at goal to win it again for the ‘Port against one of the top teams in the division. However his kick was agonisingly wide and the Wizards held out to secure their 8th win of the season, with Newport picking up what could be a valuable bonus point come the end of the season.

Next up for the B&As is a home game against Swansea scheduled for Sunday 19 January. We’ll then be next in action on Friday 31 January when we welcome Ebbw Vale to Rodney Parade in another crunch bottom-of-the-table clash, and Tyron Morris’ team will be aiming for their second double of the season and some extra safety from the possibility of relegation.