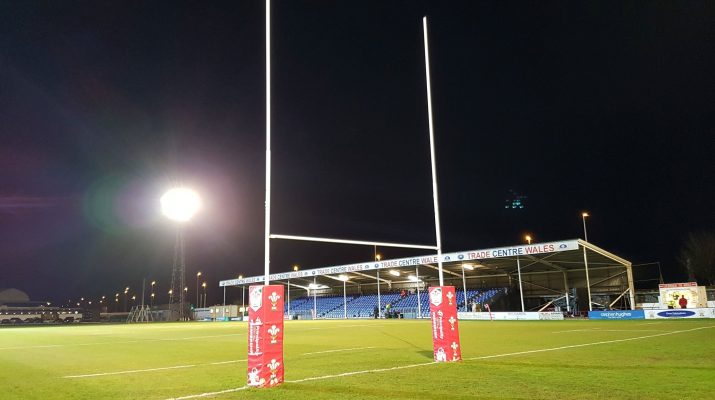 The Black & Ambers had one final away trip this season before a feast of rugby to look forward to at Rodney Parade between now and our the beginning of May. Swansea was the destination on a windy Thursday night by the sea and Craig Warlow had named a strong side to head to St Helen’s.

The B&As had won their previous 3 on the bounce in the league and the Whites 6 of their last 8, 7 consecutive at home, and had next week’s Cup quarter-final at Llandovery in their sights. Everything suggested this was going to be a close battle. In fact, it was completely the opposite.

Swansea ran out 27-5 winners and secured a bonus point in the process. In the battle of the outside-halves, it was the Whites’ J Rhys Williams who ran the show under the spotlights, scoring a hat-trick of tries and racking up 22 of his side’s tally, and all whilst playing out of position.

Williams got his first points of the evening after just 5 minutes when he slotted over a penalty, before grabbing the first of his tries soon after. The outside-half, usually a centre, charged down an attempted clearance from his opposite number, Matt O’Brien, in the Newport 22 and simply caught the ball and dived over.

And Newport’s evening got worse before it really got going when Geraint O’Driscoll was forced off with an injured leg in only his first start at full-back since the reverse fixture in November. Later, Will Evans also left the field with an apparent injury, not too long after several heated clashes with former prop, Alex Jeffries, tonight wearing the white of Swansea.

Newport had some decent opportunities during the match, and one of their best came when Jon Morris dodged the entire home defence and ran a good 30 metres before eventually being caught. Then O’Brien had a chance to put the B&As on the scoreboard with a penalty kick. With the wind being a difficult factor during the match, OB’s attempt was unsuccessful as were many of Williams’ too.

Shortly before half time, Swansea got theirs and Williams’ second try of the night when pressure in the maul proved too much for the away side which tumbled over the try line much to the home fans’ delight. Newport were still in the game going into the interval, but they needed to up their game quite considerably.

The windy conditions turned into wet and windy conditions as the heavens well and truly opened. Running rugby, on which Newport have prided themselves this season, was looking a less likely option to use from their arsenal.

Their first chance to close the gap came when a loose ball was picked up in their 22 which substitute Harri Lang picked up, booted and chased. The B&As had the wind in their favour in the second half which would usually be a significant advantage, however the Swansea Bay ‘breeze’ took the ball a little too far for the winger and the Whites were able to recover to force a drop-out.

Another great chance came when a poor Swansea kick to touch gave the away side a line-out around 35 metres away from their destination which Morris, against all odds, decided to take a quick one and handed the ball to Swansea-born Chay Smith who between them stormed towards a score, before the referee cruelly pulled them back for a forward pass somewhere in that phase.

Morris found a brilliant gap to kick the ball forwards later on, but the wind, being as unreliable as it was, took it over the dead ball line giving Swansea a scrum close to Newport’s 22. This probably summed up the night for Warlow’s men.

But the hosts pressure and territory proved too much and they landed a deserved third halfway through the half. The only thing keeping Newport even remotely in the game at this point was Swansea’s missed kicks at goal. They found themselves less than 3 converted tries adrift when it could have easily been more than 4.

And soon after, the Whites did manage to get their bonus point try and Williams’ third of the night. O’Brien, when recovering a kick which landed in his 22, bravely decided to take on the defence rather than kick to touch and clear his lines. This however resulted in a Swansea lineout close to the red zone which eventually led to Williams finding a gap in the backline and diving over on what was an impressive performance for the veteran.

The last time Newport failed to score in a competitive match? January 2016 at Bedwas in the short-lived Foster’s Challenge Cup. They were adamant not to let that happen again and Josh Skinner made sure it didn’t when he crossed over for a consolation try in the final few minutes of the game. A late Swansea sin-bin gave them even more hope, but it (way) too little, too late, and the hosts ran out comfortably and deserved winners.

The B&As’ away campaign is over and they finish with a respectable 8 wins out of a possible 15, the most notable of which coming at Merthyr, RGC 1404 and Ebbw Vale. They now have the luxury of 5 home games to end the 2018-19 season, 4 of which will be on a Saturday afternoon. This run will start with the welcome of Ebbw Vale to fortress Rodney Parade on Saturday 30 March at 2.30pm.