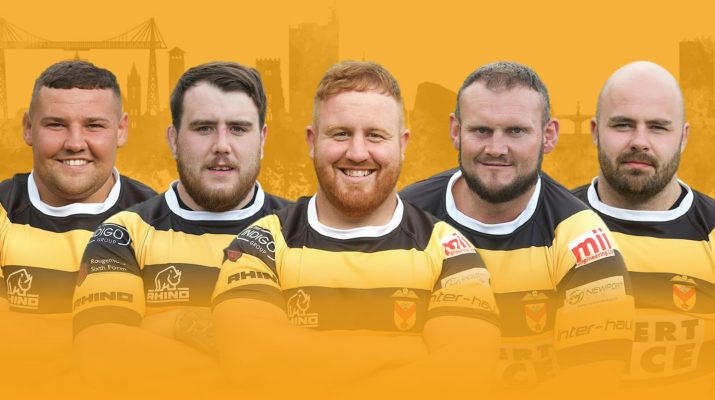 We have been bringing you good news about re-signings during the virus lock down and continue that today with news of no less than five of our props who have committed to Newport RFC for another season.

24 year old Garin Harris will be starting his 5th season at the club and is sure to get his club cap after already amassing 92 appearances. A specialist tighthead who rarely takes a backward step, his signing was a key one for the coaches to make.

Louis Jones has proved to be a most useful signing since making the move from Merthyr at the start of last season. Equally at home on either side of the scrum Louis appeared in 14 of the 16 fixtures this season and will surely feature more than that in 2020/21.

Tom Piper is the most senior of the five props and already a club cap holder with 113 appearances in the famous black and amber jersey. Newport born and bred, the home town boy is a hugely popular member of the squad and gives his all in every performance.

Dan Preece needs no introduction to anyone who follows Welsh Premiership rugby. The 33 year old has played for many clubs including Bedwas, Ebbw Vale, Cross Keys and Cardiff but will be entering his third season at our club and is a firm favourite with the fans for his strong displays at loose head.

The final re-signing is our farmer, Louis Smout, quietly spoken but a big presence on the field. ‘Smouty’ came up through The Blues Academy appearing for both Cardiff and Pontypridd before transferring to Cross Keys. In two seasons at Newport he already has 45 appearances and has improved his game tremendously under the guidance of coach Ty Morris.

Isn’t that great news to lift your spirits on Easter Monday?