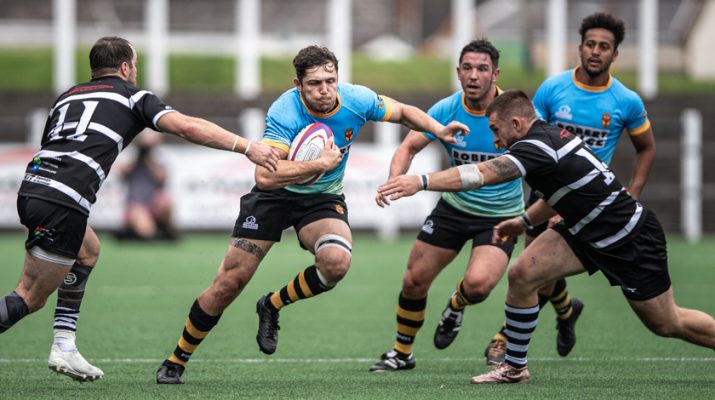 Competitive rugby is back!

The friendlies are done and dusted and, as instructive as they were, the results didn’t really matter. Now we’re back into competitions and the nuances of points scored, and margins of defeat, mean something. This was the opening weekend of the Indigo Group Premiership Cup competition and Newport are in the ‘East’ pool, understandably. Sardis Road is not an easy place to launch a new season but that’s what the fixture list gave the club, so let’s get on with it!

Newport RFC took to the artificial playing surface at Pontypridd in their new change strip, a combination of Monmouthshire blue fading into a pale green with amber trim, a real departure from the long-used red.

Matt O’Brien kicked the game off and sent the ball spiralling into the Pontypridd 22. The kick was returned, but the lineout gremlins from last week showed that they hadn’t been fully exorcised as the ball sailed over the top into the clutches of home hooker Ieuan Morris.

A Newport lineout did work well on 3 minutes as Josh Skinner took a tail ball to allow Lennon Greggains to charge into the home defence. This attracted a high tackle which the referee, Mr Gwyn Morris, had little hesitation in awarding a penalty for. Matt O’Brien took the kick and made the score Pontypridd 0 Newport 3.

Pontypridd were level on 7 minutes after a penalty was conceded by Newport for impeding a runner. The Billy Twelvetrees-lookalike outside half, Ben Burnell, took the kick to make it Pontypridd 3 Newport 3

It looked like a punch-up was brewing as the hosts flew into challenges and our boys, in no mood to be intimidated, responded in kind. Mr Morris asserted his authority and, to be fair, the game went back to being an uncompromising physical contest.

Pontypridd were trying to play a fast, flat-passing game but were forcing it as players frequently had to lean forward to take the pass. The Newport defence proved strong as Pontypridd crabbed across Sardis Road but got a break when a scrum was judged to have been illegally taken down and Ben Burnell lined up another shot at goal to make it Pontypridd 6 Newport 3 on 14 minutes.

Newport were back level on 16 minutes when Pontypridd were pinged in defence. Matt O’Brien took the kick at goal to make in Pontypridd 6 Newport 6.

Newport got a lineout right on 28 minutes as an impressive rolling maul made metres into the Pontypridd 22. Luke Crane broke but the “seatbelt” tackle from Pontypridd flanker Kristian Parker left Mr Morris no choice but to brandish the yellow card at him. Matt O’Brien slotted his third penalty to make it Pontypridd 6 Newport 9.

Pontypridd kicked their way up to the Newport 22 but the strong defence ensured that was as far as they went. The hosts huffed and puffed across field but the Black and Ambers were disciplined in defence until a knock-on was forced from hooker Ieuan Morris. Sadly, Newport let themselves down a little as they seemed to want to rush things and tried running from their own goal line. Jack Brooks, at centre, was slightly isolated and then penalised for holding on in the tackle allowing Ben Burnell a soft kick at goal to level the score to Pontypridd 9 Newport 9 on 37 minutes. This was to be Brook’s last act in this game, evidently picking up a knock in the collision, so Will Reed replaced him, initially filling-in at centre until Reed and O’Brien switched position in the second half.

In added time was a penalty awarded against Newport that still, 24 hours later, makes no sense. A dominant Newport scrum, skating their counterparts backwards at a rate of knots, was penalised for taking it down. Why would any referee think that an attacking team would do that? It’s illogical. It would be no surprise if head coach Tyrone Morris sought clarification on the laws with the refereeing team over a protein shake after the game. Ben Burnell’s penalty shot, from 55 metres, wasn’t far from doing some damage to the scoreboard.

Newport would need to improve in the second half if they wanted to win this game.

The skies over Sardis Road darkened at half time as the teams restarted. Matthew Powell, on the wing for Newport, took the catch, spun out of contact then set up a ruck. George Young carried the move on before Will Reed kicked for position. Newport burgled a Pontypridd lineout and pushed on. George Young burst Pontypridd wide open as he carried into their 22 as the rain began to fall. Reed spread the ball wide to Powell who had support on his left. The ball failed to exit the tackle area and the chance was spurned. A home defensive scrum five saw the ball safely cleared.

The first try of the afternoon came from Pontypridd wing Dale Stuckey on 47 minutes. Ben Burnell took Matthew Powell’s kick and found scrum half Joel Raikes lurking on the wing. Raikes broke and passed back inside to Stuckey who broke Will Reed’s last line of defence and cantered in to score from the Newport 22 line. Burnell added the conversion to make the score Pontypridd 16 Newport 9.

57 minutes saw the replacement of referee Gwyn Morris as he bowed out with a leg injury. There was no fourth official, so an Assistant Referee took charge, while Pontypridd provided a body to run the line. Straight away, the new man continued Mr Morris’ work by pinging Newport. Ben Burnell was only just wide from 52 metres.

Jonny Morris was making his presence felt as he got amongst the Pontypridd back line to pickpocket possession and set up a Newport attack, but the response was disappointing as the passes were laboured and eventually squandered as the ball spooned forward.

A new front row sometimes brings a splash of verve to a side, so Jamie Jeune, Matty Dwyer and Garin Harris were replaced en bloc with Lewis Smout, Brodie Coghlan and Dan Suter. A super take by George Gladding deep in Newport territory seemed promising as he skipped away from his tackler and passed to Rhys Downes. Downes’ kick was decent but made perfect by Pontypridd wing Dale Stuckey who spilled the ball into touch. Sadly, Newport failed to capitalise as the lineout, once again, sailed to no-man’s land.

A 71st minute tackle by Jonny Morris on Ben Burnell could have won him the player of the match plaudits for that hit alone. It was beautiful and absolutely stopped the black and white shirts mid-flow. Burnell was also found to have held onto the ball in possession so was a double win for Newport. Matt O’Brien kicked the penalty to the corner on the stand side. Lineout won, Brodie Coghlan made a break for the line but was felled just short. The pressure was instantly relieved on Pontypridd as an unseen Newport player grabbed Coghlan’s jersey and tried to haul him into the tryzone; you can’t do that. Newport soon had a second bite of the cherry when Pontypridd were found to have put into a line out not straight, remarkably for the first time this afternoon, but this chance, too, was butchered. My handwritten notes are punctuated with the capitalised word FRUSTRATING.

Pontypridd added to their score on 76 minutes when Newport conceded a penalty in defence, Burnell successfully making the score Pontypridd 19 Newport 9.

Into added time, of which there was plenty, as the game was becoming reminiscent of Lions v South Africa second test proportions, an hour per half of rugby with stoppages, Pontypridd were penalised at a scrummage. Matt O’Brien placed a near-perfect kick to the corner. Big Joe Bartlett secured the ball and began the maul, this time there was no mistake as Brodie Coghlan scrambled over the line having had the maul work to the right. Will Reed added the conversion to make it Pontypridd 19 Newport 16 on 80+1 minutes. Game on!

Matthew Powell caught the restart but was well tackled. George Young carried the ball away but spilled it in the tackle. Pontypridd received a penalty award but, rather than go for 3 and win the game, they gambled on more to deny Newport a bonus point. Only that didn’t work either as the lineout ball bobbled loose. Newport carried away and were assisted when Pontypridd, in their eagerness, conceded a penalty. Matt O’Brien punted Newport to a position just shy of halfway to enable Newport to launch a final, devastating attack…..but the lineout ball, sailing a good six inches above Elliot Ferriman’s outstretched hand, was symptomatic of their afternoon.

Ben Burnell took the pass for Pontypridd and kicked the ball into touch and secured a season-opening win for his team.

Newport RFC are next in action against our favourite enemies, Cardiff RFC. They visit Rodney Parade for the next round of Indigo Group Premiership Cup games. Kick off is at 7.15pm. We really hope that you can make it!