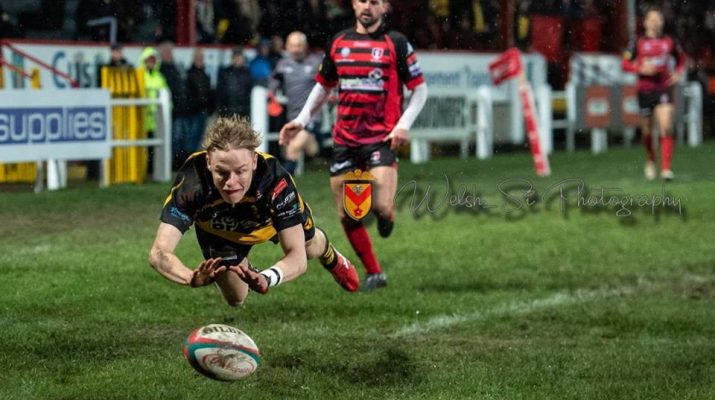 Conditions were much better than expected and Aberavon kicked off to start, what turned out to be, a very competitive game. The kick was well taken, and Matt O’Brien took advantage of the wind to find touch in the home 22. Aberavon then showed how dangerous they can be with some fine running, handling and support leading to a length of the field try. The conversion made it 7 – 0 after just 4 minutes. Newport soon struck back with some good play involving forwards and backs forcing a penalty which OB slotted over.

Both sides were playing some good rugby in the conditions with Newport using the wind to kick for position. Again, Aberavon tried to run from deep, but a long pass missed everyone and looked to be going in to touch but Newport full-back, David Richards, managed to get his foot to it and his perfectly weighted kick saw him beat the defenders and dive on the ball for a try. The conversion was missed but the visitors were now in front, 8 – 7.

Another sustained period of handling saw Duan Thomas just get the try in the corner but before it was awarded the referee had to deal with a scuffle in the middle of the pitch. After a conversation with his assistant referee, the Aberavon hooker, Ieuan Davies, was given a red card. The assistant referees were to make several important decisions during this game. Try awarded, conversion missed, 13 – 7.

A ‘no-arms’ tackle gave the home side a penalty to make the score 13 – 10 but the visitors struck back and earned a penalty just 10 metres from the try line. A quick decision and it was tap and run. It didn’t come off and Aberavon broke away and were only stopped by desperate defence with Ryan James getting a yellow card for off-side.

Both sides were playing some good stuff and the first half ended with Newport leading 13 – 10.

The game continued with more intense rugby, but the visitors were conceding too many penalties and the referee was getting lots of advice from his assistants and the crowd. Aberavon were now pressing towards the line and Josh Skinner got a yellow card for a maul offence.

We then saw a ten-minute period when play was on or around the Newport 5 metre line. Superb defence kept the line intact, but it was all Aberavon now with wave after wave of attacks. Another maul offence gave Aberavon a kickable penalty and the score was now 13 – 13 after 74 minutes.

But it wasn’t over! A rare Newport attack saw Tom Pascoe emerge from a ‘ruck’ with the ball and canter over and touch down under the posts. The home players lined up for the conversion and OB prepared for the kick, but the assistant referee intervened, and the try was disallowed.

The game ended 13 – 13 and most observers would say that was probably a fair result with Aberavon showing attacking flair and Newport showing solid defence.

This was young David Richards’ last game for a while as he heads to New Zealand to continue his rugby journey. Thanks for your contribution, Dai, and we look forward to seeing you in black & amber in the future.