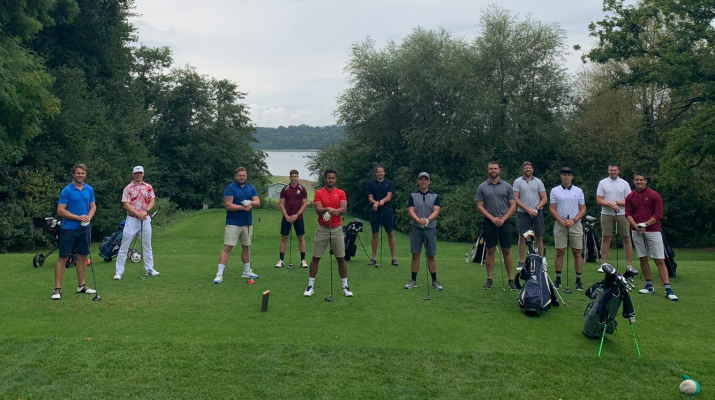 As with a lot of sports teams there are a few keen golfers amongst the Newport squad, and a year ago the idea of a club golf society was first mentioned. Three events in the summer and autumn of 2019 all fell foul to weather conditions and when the rugby season, and pretty much everything else, was put on hold in March, it seemed as though we were never going to get the “BAGS” (Black and Ambers Golf Society) off the ground.

However with golf one of the first activities opened up to participants an event was arranged at Woodlake Golf Club for Sunday 16th August in hope of some good weather. 13 players and management staff signed up and despite the recent thunderstorms it seemed we had managed to time our round perfectly during a break in the bad weather. However after 2 hours of dry grips, and even a bit of sunshine, a thunderstorm rolled in quicker than Elliot Frewen running in an interception, when the leading group were on the 14th green. The round had to be abandoned due to the threat of lightning and the competition was reduced to a 12 hole stableford.

The scores were totalled up and Jonny “Tiger” Morris and Rhys Downes were tied on 24 points with Stuart Lawrence, Geraint O’Driscoll, Matt O’Brien and Elliott Ferriman close behind on 22 points. Due to his superior score on the final 3 holes Jonny “Tiger” Morris, wearing red as his namesake would during the last round of a major (no coincidence, it was completely intentional) claimed the coveted Red Towel. On his win Jonny commented, “I’d like to thank Matty Dwyer for hiring a buggy for me and him. Around a hilly course this saved the energy in my legs and ultimately allowed me to finish strongly which was the difference between me and Rhys”.

The longest drive was claimed by Elliott Ferriman with a monster effort. Elliott admitted “having long limbs obviously helps with generating the power but it’s all about coordination and timing, and TikTok has helped me develop this hugely over lockdown”

The next BAGS meeting will hopefully take place in September with everyone eager to challenge Jonny, playing off a much reduced handicap following this victory, for the Red Towel!

Thank you to Woodlake Golf Club for hosting us and serving food beforehand and afterwards (and during for Matty Dwyer).