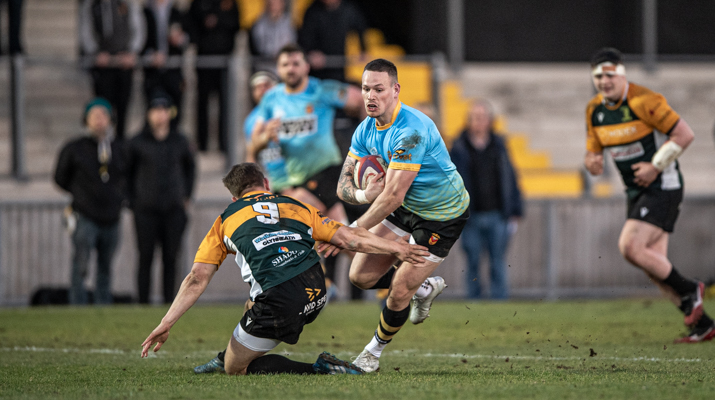 The defeat to RGC had been something of a cold-water shower for Newport supporters, who had become used to their team winning and, with seemingly one hand on the league title, a shaft of cold, hard reality was dealt to the club as a whole.

The visit to Newport Stadium of the Merthyr Ironmen was not going to be a ‘gimme’, despite Newport having played, and beaten, them twice this season already, devastatingly so in the away Cup leg in November. Since the announcement of Dale McIntosh’s departure, Merthyr appear to have improved, as coach Ty Morris pointed out in his programme notes. Ty went on to add “One thing about being top of the league is that everyone raises their game to knock you off. This is a challenge we have put to the players this week”. It is a new skill that the squad are having to learn quickly.

Following some awful, wintery weather in the days running up to this fixture, conditions calmed into a half-decent evening with a few strong gusts pulsing through.

Newport took to the field in their Monmouthshire blue change strip, the referee deeming that it was too close to Merthyr’s green and yellow hoops.

Matt O’Brien kicked off the game, with Newport attacking the SDR end of Newport Stadium, Merthyr taking an early opportunity to attack when fullback Alex Webber tiptoed a path through the right flank. He kicked ahead for wing Adam Hoskins to pursue but the Newport cover defence had streamed back and forced the knock on as Hoskins attempted to ground the ball.

The play was surprisingly open, initially, as both teams probed for openings. Andrew Mann took a heavy contact as he trucked the ball forward, Ioan Davies jinked up from fullback and broke into the Merthyr 22. Newport played through the phases but the pass out to Andrew Mann was slightly too far ahead of him, and he would have done well to keep hold of it and the visitors could boot the ball clear.

Newport were enjoying the upper hand, in many respects, Ben Roach excelling again, turning poor passes into good ones with his handling skills. Newport stole a lineout ball and pushed forward but an unfortunate knock-on by Rhys Jenkins conceded the opportunity.

Just as Newport were trying to construct an attacking passage, Merthyr struck. A pass out from Cameron Lewis was picked off by former Newport centre Tom Pascoe. Pascoe strode forward and reached 5 metres out before Matt O’Brien had retreated to defend. Adam Hoskins was quick to support and was able to burrow over for the game’s opening try. Outside half Gareth Thompson added the conversion to make it Newport 0 Merthyr 7 on 14 minutes.

Newport responded with Ioan Davies chasing through a gap on the left wing. He passed infield to Jonny Morris who had Josh Skinner to his right again. Skinner kicked ahead and then put in an exemplary chase by ankle-tapping Gareth Thompson inside his own in-goal area forcing him to ground it and give Newport an attacking 5 metre scrum. The ball emerged with a Newport penalty advantage. Matt O’Brien went to the corner. Lineout won, the rolling maul collapsed suspiciously quickly, but legally, according to referee Mr Elfyn Morris-Roberts. Newport pushed ahead but were stripped in contact after solid work by Merthyr prop Callum Lewis. Merthyr could boot the ball long, but Matt O’Brien took the lineout quickly to Jonny Morris. Merthyr were disjointed, expecting the set lineout, as Josh Skinner carried the ball into contact, but Merthyr were pinged for playing the ball on the floor. Matt O’Brien considered his options before gesturing to the posts. He took the successful kick to make the score Newport 3 Merthyr 7 on 24 minutes.

A loose Merthyr pass was seized on by wing Matthew Powell on 24 minutes. Newport moved the ball around the narrow channel on the right before going more central. Matt O’Brien took control of the situation and delayed the pass beautifully for an onrushing Cameron Lewis to burst the Merthyr defensive line and streak in to score. Matt O’Brien added the two-pointer to make the score Newport 10 Merthyr 7.

A shortened lineout, just 5 metres from the Newport line, was stolen by Callum Bradbury. Newport scrambled in defence, a cross-kick from Thompson to wing Hoskins was disrupted as wing Mathew Powell got in the way and forced the Merthyr knock-on.

Newport conceded a penalty on 32 minutes, 48 metres from their try-line. Gareth Thompson gestured a kick at the sticks which, to be fair, didn’t go far left of the uprights.

Merthyr got their noses ahead again on 35 minutes following Newport being penalised for hanging onto the ball in the tackle. Outside-half Thompson placed his team into the corner allowing his big forwards to bump onwards. Phase upon heavy phase came towards the Newport line until the ball saw some air; a pass out to fullback Webber had wing Adam Hoskins in a little space and he crossed for the try despite the attention of Ioan Davies. Mr Morris-Roberts referred to his TMO to seek clarity, but he was happy with the grounding and awarded the try. Thompson added the conversion to make the score Newport 10 Merthyr 14.

The visitors extended that lead on 42 minutes when the Newport defence appeared to have already jogged down the tunnel for their halftime orange. Merthyr number 8 Tom Daley made good ground, the Merthyr attackers pushing Newport back with every contact. They made it into the Newport 22 as flanker Masa Tutaia carried defenders with him as he made a pass out of contact to his captain, Craig Locke, to dive over from short range for a try. Thompson, again, added the conversion to make it Newport 10 Merthyr 21 on 40+2 minutes.

Play restarted, Newport tried to look to create; Ioan Davies sprinted into a half-gap with the ball inviting a neck-high challenge from Tom Pascoe. The penalty was obvious but, watching the S4C coverage back, Mr Morris-Roberts had to be talked down from a red card to the lesser yellow. Newport took the penalty to the corner, but the Merthyr defence was strong and soaked up the Newport attack forcing a knock-on from Jonny Morris to bring the half to an end.

Gareth Thompson restarted the game, unfortunately resulting in Josh Skinner fumbling the catch. Newport managed to dampen down the situation and cleared the ball to halfway. Unfortunately, again, a grubber kick from Thompson bounced over Mathew Powell’s outstretched arms for a 50:22. Merthyr were raising the physicality of their play, Craig Locke prominent as they heaved forward, but a knock-on let Newport off the hook and Jonny Morris could clear the ball away.

Newport were oddly inaccurate in some of their play, which didn’t help, giving a team such as Merthyr a helping hand. The needed no persuasion to attack the Newport line but a pass out to wing Hoskins went behind him.

Newport carried on trying to spread the ball, picking up the pace. Che Hope broke through a gap, but the Merthyr defence stood firm and a pass out from Matt O’Brien was, again, picked off by Ashley Norton for Merthyr to clear. A kick forward seemed promising for Newport as Josh Skinner picked up the bouncing ball on the run only for Mr Morris-Roberts to give Merthyr a penalty for Newport interfering with an attacking runner. Gareth Thompson kicked the penalty from 47 metres to make the score Newport 10 Merthyr 24 on 48 minutes.

The introduction of Luke Crane was hoped to be the catalyst to spark a turnaround in Newport’s play; as good as Che Hope is, he doesn’t yet quite have Crane’s know-how. Almost instantly, Crane was asking different questions of the Merthyr defence. He managed to pass the ball out of contact, despite being high tackled, the ball reaching Cameron Lewis. He drew the defence before passing on to Dafydd Smith. Smith then produced a tremendous pass inside to Will Talbot-Davies, on for Mathew Powell, to sprint in for a terrific try. Matt O’Brien added the conversion to make the score Newport 17 Merthyr 24 on 53 minutes.

Newport were beginning to struggle to match Merthyr, physically. The Ironmen were gaining a few inches with each contact and were dominating the collisions, as you often hear coaching staff say. Sadly, for Newport, they soon scored again, through wing Ashley Norton, on 59 minutes. Scrum half Carl Blacker recognised an overlap on his left. He set Alex Webber on his way and a pass out of the tackle, by Talbot-Davies, set Ashley Norton on an easy run to the try line. Gareth Thompson added the conversion to make the score Newport 17 Merthyr 31.

Merthyr extended their lead on 72 minutes when Newport conceded a penalty to a decision that seems obtuse. Jonny Morris slipped and made a tackle as he rose. This was punished by Mr Morris-Roberts and Gareth Thompson punted the kick from 47 metres to make it Newport 17 Merthyr 34.

Newport gained a rare penalty off the referee for Merthyr not releasing. Newport set up a rolling maul, just metres from the Merthyr line but it splintered, and the position was lost.

Cameron Lewis added to Newport’s score on 76 minutes. Newport had to respond; Luke Crane took a quick tap penalty as Merthyr continued infringing, the ball worked out to Lewis who powered across the top of the Merthyr scrum half to dot down. Sadly, Matt O’Brien couldn’t add the conversion, so the scoreboard read Newport 22 Merthyr 34.

Time was running out but, should Newport score another try, it would have given them two league points, one for four tries scored and another for being within the losing points margin. Despite plenty of effort, the Merthyr defence remained rigid. Newport almost broke through on 80+2 minutes when Ben Roach fielded a kick. He ran back at the defence before passing to Ioan Davies, but defender Jarrod Cushion put out a hand to deliberately knock the ball forward. Mr Morris-Roberts reached for his yellow card a second time, inviting Cushion to sit on the naughty step for the remainder of the game.

Despite Newport’s efforts, Merthyr held on for the win, blowing the race for the League championship open and, possibly, giving the opportunity for Cardiff or Aberavon to sneak in during the final weeks. It’s disappointing, but it’s testament to how far this group of players and management have raised our expectations. To still be in with a very good chance of winning both the league and cup, in mid-April, has been unthinkable for Newport supporters for years.  All is not lost!

Newport RFC take a week off now and have a little extra preparation time for the small matter of the Welsh Cup final. This will take place on Sunday 24th April at the Principality Stadium. The kick-off time is at 5.35pm and will be broadcast live on S4C. Newport will be taking on fellow league title contenders Aberavon, who play a similar style of rugby to us, so, hopefully, an entertaining game will be in prospect. Ticket details are still to be announced at the time of writing but should be known soon.

After this is ne more game, the Indigo Group Premiership finale, when Newport travel to play Carmarthen Quins on Sunday May 1st, kicking off at 2.30pm. This is a revised date for this game, so please make a note in your diaries. The Friends of Newport Rugby are organising a coach for supporters who may wish to travel. Seats can be booked by contacting Steve on stattonrfc@live.co.uk.