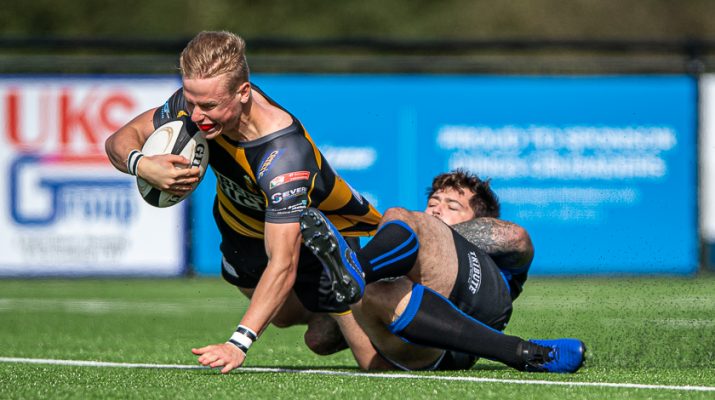 Newport completed their 2019/2020 season preparations with a visit to a club that has never featured on the fixture list before. Dings Crusaders will play in the RFU National 2 South division this season. They are blessed with a fantastic set up, an enviable new ground at Shaftesbury Park and clubhouse, opened in February by all accounts. They run a full range of teams from kiddies to the full first XV. They have a couple of ladies teams too for good measure. Indeed, on our visit, the Bristol Bears ladies, connected to the Premiership team, were tucking into their post-match meal and settling down to watch Wales v Ireland on the big screen.

The location of the ground is a short trip from Bristol Parkway railway station and butts onto the M32 motorway.

Joe Bartlett led the team onto the field, in reality a modern ‘hybrid’-type pitch, while Dings, lining up in black and navy blue hoops, played towards the motorway.

Haydn Simons got the game underway but found the going difficult. They conceded a penalty from the first scrum for a binding infringement. Dings kicked long for a lineout into the Newport 22. With possession retained Dings set up battering into the Newport defence but with little reward until the referee spotted a high tackle in midfield. Dings opted to kick at goal and were successful as outside half Ollie Milner gave his side a 3-0 led with five minutes played.

Newport were attacking in the eleventh minute as they drove at the Dings line. A powerful series of surges inched them closer. Geraint Watkin did well to retain the ball at one point before Haydn Simons made a burst. Simons was tackled but Newport were awarded the attacking scrum as Dings had knocked on. The strong scrum had to be reset but the ball reached Haydn Simons again until he was snagged. Kyle Tayler was in as a makeshift ‘9’ but his pass out was spilled. Dings were on it in a flash, their speedy winger racing upfield with black and amber jerseys trailing in his wake. He had support to his right, however, and wisely used it as Newport tried to close the danger down. Wing Ian Clark was credited with the well-taken try which Ollie Milner converted to make the score Dings 10 Newport 0.

Dings had their tails up, figuratively speaking. Newport were cleaved apart by a surging run from full back bringing try-scorer Clark onto the ball again. He was snagged as the Newport klaxons sounded but the ball popped up into the path of the onrushing Dings loosehead prop, only for him to fumble it with the line at his mercy. Jonny Morris claimed the ball and it was soon belted away downfield.

Newport seemed unable to think their way out of the situation. Some of the Dings backs appeared to be stepping through tackles at will and it took until the 30th minute for Newport to enjoy a second foray into Dings territory. A well-worked ploy saw Joe Bartlett jumping at the tail of the line as Geraint Watkin traversed across field to pass to Jonny Morris. Morris arced a run toward winger Harri Lang but Lang was isolated with the ball and hung on for a fraction too long.

Newport were going forward again four minutes later. Prop Louis Jones worked hard at punching holes in the Dings defence. Joe Bartlett had a thrust forward while Kyle Tayler took the ball into heavy traffic. Sadly, the pass out towards Jonny Morris and Dai Richards boomed behind them. Richards turned to retrieve but was ushered into touch. Newport made a series of determined drives which looked like they might pay off. Jamie Jeune found the door slammed shut on him as Jonny Morris effervesced in attack. With Dings holding firm it was time for thinking; Haydn Simons cross-field kick appeared, to us supporters, as a wasted opportunity as it seemed aimed at three Dings shirts grouped near the try line. However, the lurking Andrew Mann sniffed opportunity as he jumped and caught the ball cleanly and flopped across the line for a try, probably leaving the expectant Dings trio thoroughly deflated. Haydn Simons added the conversion making the score Dings 10 Newport 7 as the referee signalled for halftime.

Newport made a few changes at halftime, not least the half back pairing where Geraint Watkin and Haydn Simons gave way to Luke Crane and Matt O’Brien. Newport conceded a try on 42 minutes as Luke Crane was slightly premature in bothering the back of a Dings scrum. Dings’ Milner had an unsuccessful penalty attempt but Newport’s problems hadn’t quite gone away as they forced miracle passes and kept pressure on themselves.

Still, it was a pre-season friendly and this was a time to try planned moves. When Dings conceded a 47th minute penalty for holding on in the tackle just inside the Newport half then a scrum wouldn’t be the first option that sprung to mind. That’s what Newport selected, however. Luke Crane broke right from the base of the scrum with Reuben Tucker in support. As Newport spread the ball left the move was going ok until a pass from Matt O’Brien ended up cannoning off a chest.

Newport conceded a series of penalties allowing Dings position into the Newport 22. The Black and Ambers were offside at a maul so Dings opted to kick to the corner for a lineout. The hosts massively over-complicated the lineout, throwing to the back jumper while the ‘pods’ shuffled around. Newport turned the ball over quickly allowing Luke Crane to pass out to Tom Pascoe who released Adam Sabri on his shoulder. Sabri covered the ground quickly before making a neat pop pass to Dai Richards to finish the job off. Richards outpaced the Dings cover, neatly evading tackles to cap a smart length of field score. Matt O’Brien added the conversion to make it Dings 10 Newport 14 on 53 minutes.

Dings responded strongly with a series of drives but Reuben Tucker made a nuisance of himself, disrupting the ball, while Matt O’Brien was first on the deck to secure the loose ball for Newport.

Newport finally seemed to have cleared their cylinders and were firing cleanly. An excellent handling move featuring both backs and forwards highlighted the 59th minute, Tom Piper and Jamie Jeune showing up especially well as they popped passes around allowing flanker Garin Price to make a physical charge into the Dings half. As a Dings hand got involved in a pass Newport had a decent scrum position to attack from. Newport went right to wing Adam Sabri. Sabri tried to play the ball but it ballooned backwards to Reuben Tucker. The ball whipped left quickly via Pascoe and Richards to wing Harri Griffiths but he spilled the try-scoring pass with an open line.

Dings had a scrum on 66 minutes that nudged forward but a mighty counter-shove by Messrs Smout, Jeune and Piper had their opposite numbers in all sorts of trouble. Luke Crane capitalised in their disarray by pinching the loose ball and working it quickly away. Adam Sabri again hammered towards the line but was caught. Second row Harri Oliver charged through the ruck to move the Black and Ambers nearer while Josh Skinner was millimetres behind him carrying the move on. They made enough room for Jack Wright, on at centre, to scoot through and burst through for an unstoppable score. Matt O’Brien added the conversion to make it Dings 10 Newport 21.

It was Dings turn to answer questions. Outside half Milner was nailed in the Newport half as the ball bobbled loose. Jack Wright hacked ahead as Newport pursued. Adam Sabri almost collected the ball but Luke Crane did, encouraging Dings to concede a penalty as they went. Newport opted for the scrum some thirty metres out. Newport worked hard with Dai Richards being brought onto the ball a lot. The black and ambers looked for gaps but it was down to Jack Wright to physically blow a gap open as he pinballed between two defenders, spun and sprinted for the line, angling under the posts for his second score. Matt O’Brien again added the conversion to make it Ding 10 Newport 28.

Dings were still pushing. They came close in the 75th minute but they were playing in quite an orthodox manner, running in straight predictable lines that were proving reasonably easy for Newport to soak up. They did get awful close as their big tighthead strode from a maul, moving backwards as he did, to cross but Garin Price did very well to get himself between the ground and the ball to hold the score up. However, Dings weren’t to be denied as a penalty had occurred. Dings kicked to the corner and the rolling maul provided a try scored by hooker Joe Hawkesby with the conversion added by Luke Arscott. This made the score Dings 17 Newport 28 on 77 minutes.

A minute later and Dings had knocked on in attack. Luke Crane spotted a gap on the narrow side to launch Adam Sabri. Sabri greyhounded up the wing and appeared certain to score but the referee had doubts. He consulted with his assistant and ruled no try, the ball had been dropped in the act of scoring and a Dings dropout 22 resulted.

With added time being played Dings had one last trick up their sleeve. A wing set off at pace having gathered up a loose ball. With a clear field ahead of him and defenders closing in behind him he jinked infield looking for support. It arrived as a pass was boomed across field to change the angle of attack. Newport had realigned quickly enough to form up a defensive line as a ruck formed. As Dings were about to relaunch, a cheeky black and amber clad arm emerged and pulled the scrum half’s arm away, thereby signalling the start of a thirty player melee which took a minute or two to calm down. Once the referee had spoken with four players, O’Brien and Crane on Newport’s side, then play resumed with a Dings penalty. They launched a rolling maul from the lineout which rocked and rolled looking for weaknesses. As the maul broke, a Newport jersey appeared to have been under the ball again but, regardless, the referee had spotted something and awarded Dings a penalty try making the score Dings 24 Newport 28 as full time was signalled.

This was another valuable workout for the squad and lessons will have been learned and will be digested. Newport RFC would like to thank Dings Crusaders RFC for the fixture and wish them good luck for the season ahead in National 2 South.

Attention now turns to next Saturday and the launch of the Indigo Group Premiership season. We travel to Ebbw Vale RFC for a 5.30pm kick off. The Friends of Newport Rugby Trust are planning to run a bus to the game for supporters. If you would like to travel with them then please get in touch with the club as soon as possible through the usual channels as soon as possible.

Get behind the Black and Ambers for what could prove to be a big season!

Your City. Your Colours. Your Club.