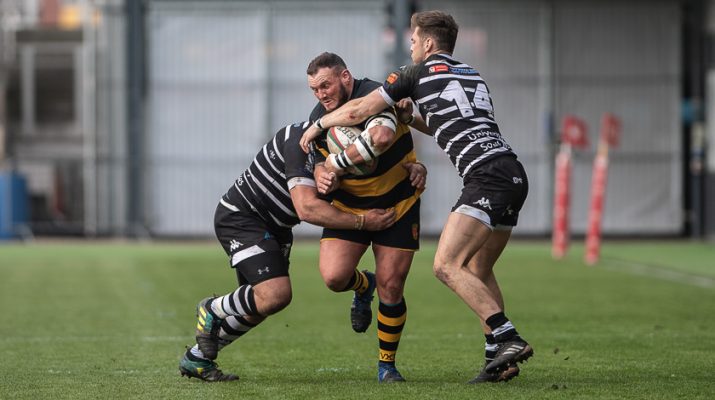 Following on from the disappointment of the result in our last home Principality Premiership home game against Ebbw Vale, where the game was lost, agonisingly, with the last kick of the game to a drop goal, Newport RFC supporters were hoping for a high-octane display against Pontypridd RFC, a team that Newport often seem to do ok against at home, not so well away.

It was a pleasant day, weather wise, brightening with a slight chill on the breeze as Tom Piper led the Black and Ambers onto the field on the occasion of one hundred appearances for the club. Congratulations Tom! We hope that there will be many more to come.

Pontypridd’s outside half Ceri Sweeney kicked off with Newport defending the school end. Newport’s first action was to knock on the catch, their second was to concede a penalty at the resulting scrum. Pontypridd back-rower Rhys Shellard was up at the tail of the line out to take the ball and allow hooker Huw Dowden, making his 250th appearance in black and white, and centre Dafydd Lockyer to pound the Black and Amber defence. Kyle Tayler, the turnover specialist, was on hand to dig Newport out of an early hole as he retrieved the ball and tried to get the backs moving. Jonny Morris drew a penalty following a high tackle but the line out resulting from Matt O’Brien’s touch finder was disrupted and Pontypridd launched an attack from deep. They found some joy along their right wing where Alex Webber, playing at 14 for Pontypridd could exploit some of the space afforded him. He streaked down his wing before releasing scrum half Joel Raikes but he was caught and tackled athletically by Morgan Burgess. By the time Newport had recovered in numbers they were judged to be offside by the referee, Mr Tom Spurrier, and Ceri Sweeney was presented with a regulation shot at goal to move Pontypridd into a 0-3 lead on five minutes.

Newport went close soon after the restart as Tom Pascoe stole possession. He released Jonny Morris but, with Morris tackled and little support, Ponty’s Shellard stepped into position, took the ruck ball and snuffed Newport’s chances of retaliation out.

The Newport defence were settling OK at this point, a good hit by Jonny Morris on Ceri Sweeney had the former professional retreating at pace, but the Black and Ambers were too eager for Mr Spurrier who called them offside again. Surprisingly the straightforward-looking shot at goal was kicked wide by Sweeney to keep the score at 0-3 with 13 minutes gone.

Pontypridd were exploiting their right wing, Alex Webber hacking ahead along the touchline for Ryan James to shepherd into touch. Pontypridd won their lineout ball and simply moved the ball wide where wing Corey Howells, who had a few games for Newport while he was with the Dragons professional team, coasted across the try line following a simple overlap. Sweeney added the two-pointer to make the score Newport 0 Pontypridd 10 with 17 minutes played.

Pontypridd fullback Gary Williams knocked a kick on to give Newport a good position some eight to ten metres out from the Pontypridd line. Ponty attacked the scrum making the ball difficult for Matthew Reed to play from its base. Reed managed to work it out to Ryan James but the ball was knocked on by Pontypridd in the tackle. With no advantage coming Mr Spurrier brought play back. With Pontypridd clearly enjoying a superiority of sorts in the scrums it was little surprise when the Newport scrum was turned and the Black and Ambers found themselves back in their own half.

In footballing parlance, Newport weren’t “at it”. Passes were cannoning off chests, balls were being spilled and the team looked disjointed somehow. This wasn’t “our” Newport.

Pontypridd were going forward again on 22 minutes when Corey Howells skipped past Ryan James. Jonny Morris intervened but his attempt to intercept Howells’ pass was spilled and ended up in a penalty. Pontypridd went to the corner but the throw in wasn’t straight and Newport could begin to try to build.

Dan Partridge took a lineout ball well in the Pontypridd half allowing Matt O’Brien and Matthew Reed to interpass. However, Reed was tackled and stripped of the ball allowing Rhys Shellard, the Pontypridd flanker, to stride away. Possession worked out to scrumhalf Joel Raikes who sliced through the Newport cover before his pass found Alex Webber at pace on the right wing. Webber streaked in to score a well-taken try from distance, dotting down in the corner underneath the Burnett Suite. Ceri Sweeney couldn’t add the conversion so the score now read Newport 0 Pontypridd 15 with 32 minutes played.

Newport conceded yet another penalty at a scrum on 35 minutes which was made worse by somebody chopsing at Mr Spurrier and granting Ceri Sweeney another ten metres off the kick at goal. There was no mistake as the ball bisected the uprights to bring the score to Newport 0 Pontypridd 18.

Newport won a scrum penalty themselves on 37 minutes to herald their brightest phase of the game so far. Ryan James took the quick tap penalty and fed Matthew Reed. Reed forced his way into the Pontypridd 22 metre area before the ball worked out to winger Duan Thomas. Thomas reached five metres short of the line before Kyle Tayler carried on the charge before the Turnover King was himself turned over. The clearance by the visitors was poor and allowed Newport a five-metre line out. Dan Partridge took the throw, Henry Palmer joining the back of the rolling maul, edging closer to the Ponty line, close enough that when he fell his back appeared to be on the line itself. The ball popped up to Matt O’Brien who barged his way over the line, close to the left hand pad, only for Mr Spurrier to judge that the ball was held up in a remarkable tackle by a member of the Pontypridd loose forward trio. Pontypridd disrupted the resulting scrum five but could only clear to their 22 metre line. Pontypridd infringed again on 40+2 minutes. Matt O’Brien took the tap, bounced his way through and around some would-be tacklers before lunging at the line. He was held up but the ball popped up to the onrushing Tom Pascoe whose powerful frame wasn’t to be denied from short range. Matt O’Brien added the conversion to make the score Newport 7 Pontypridd 18 with the last play of the first half.

Matt O’Brien recommenced the rugby as Newport now defended the North Terrace end. Duan Thomas played a loose Pontypridd kick, passed out to Matt O’Brien and on to Matthew Reed. Ryan James carried forward, over-running Matt O’Brien but finding Andrew Mann on his left but Mann simply spilled the ball in contact. It was apparent that whatever Newport were trying wasn’t going to work today. The harder they tried, the less things seemed to come off.

Newport conceded another scrum penalty on 43 minutes. From the lineout Ceri Sweeney wriggled through a few tacklers before being downed five metres out but the damage was done as an overlap appeared on their left and Corey Howells simply had to catch the pass and canter across the line for his second try. Ceri Sweeney added the tough conversion kick from the touchline to make the score Newport 7 Pontypridd 25.

Pontypridd scored their bonus point try on 50 minutes through centre Alex Knott. They were playing easy, unfussy rugby, living off Newport’s mistakes and capitalising on them. And Newport’s mistakes were like trains on the London Underground; miss one? No matter, there’ll be another along soon. Sweeney added the conversion to make the score Newport 7 Pontypridd 32.

Newport made mass changes in an effort to retrieve something, anything, out of the game and they did look promising for a while. Tom Lucas was lively at scrumhalf, Dan Preece made some strong carries along the left wing but it wasn’t long before another self-inflicted injury was struck as Will Evans tried to float a long pass out to his left only for Ponty centre Alex Knott to pick off the pass and print in unchallenged for a try. Ceri Sweeney added the two to make the score Newport 7 Pontypridd 39 on 61 minutes.

The frustration was beginning to emerge in players and supporters alike; Rhys Jenkins late-tackled Ceri Sweeney on 65 minutes, the former Wales international responding by punching Jenkins in the head and aiming a kick at him. This cheap shot went entirely unpunished by Mr Spurrier and, after a quick chat, the original penalty against Jenkins stood. Joe Bartlett, on at second row, covered for his mate by stealing Pontypridd’s lineout ball and allowing the Black and Ambers to clear.

Matt O’Brien tried an enterprising option on 68 minutes with a cross-kick to Jonny Morris with replacement centre Sion Summers in support but the visitors smothered this effectively too. Newport were forcing the pace and a pass by Tom Pascoe was intercepted by Alex Webber who put in a grubber kick for centre Alex Knott to chase. Geraint O’Driscoll was on hand to mop up this particular threat and Newport cleared.

It got worse on 74 minutes when, after some deliberation, Mr Spurrier found Dan Preece guilty of taking a Pontypridd player out off the ball. Preece was shown a yellow card for his trouble.

To rub salt into the wound, Pontypridd replacement Harvey Connelly held onto Will Evans’ leg at a ruck. As Evans tried to extricate himself, Connelly reared up and began raining in punches on Evans. Mr Spurrier gave Connelly a talking too but just a penalty on this occasion, no cards. Following a deliberate knock on by Corey Howells that just gave away a scrum and a neck-roll on Matt O’Brien by Connelly that went entirely unpunished, one did wonder what Newport RFC had to do to be judged equally.

The self-immolation was completed on 80+2 minutes when, after changes galore and the Newport pack now performing more like its usual self, a Pontypridd scrum was disrupted but the ball simply whizzed along their backline for Corey Howells to cross untouched for his hat-trick of tries. Replacement Lewis Williams added the conversion to complete the scoring. It was now Newport 7 Pontypridd 46.

Newport pushed for a consolation score in the dying seconds. Joe Bartlett ploughed a furrow into the Pontypridd 22. Kyle Tayler carried the move on and Ponty looked genuinely stretched for the first time that afternoon until Will Evans spilled the ball in the tackle with the try-line begging.

This wasn’t the performance of a team that aspires to finish the season in the top six of the league. It was, by my reckoning, the biggest home league defeat since September 7th 2012 when Newport were battered by Llanelli by 6 points to 46, which means that, obviously, we don’t get performances like this that often. Hopefully the next one is in 2026.

Improvements are needed quickly. Next Saturday we face champions Merthyr RFC at Rodney Parade. The Ironmen are a powerful unit which will require Newport to fire on all cylinders. It’ll be nothing if not interesting! The club needs your support, please come along and support the boys in Black and Amber!