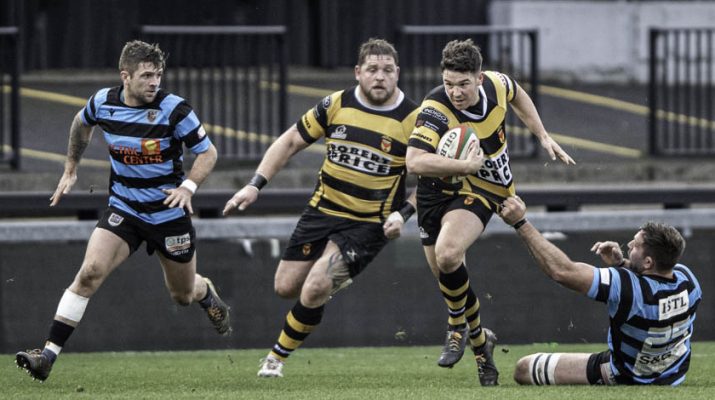 It’s not easy being a Newport supporter. With the spectre of more Rodney Parade politics raising their head in recent weeks, in a similar vein to the 2017 upheaval, it was a pleasure to concentrate on some actual, real-life rugby. Following a tepid performance away at Llanelli in the last fixture a big game, and a big performance, was needed and who better to inspire that than table-topping Cardiff RFC. They have recruited magnificently over the summer and are well-coached by Steve Law and his team. The sight of a blue and black team on our turf should be enough to get any Newport player ‘up’ for a good performance!

Our two clubs united for a good cause before kick-off when a bucket-shake was held for Steve Taylor who suffered a horrific road accident near Glasgow recently causing him to undergo several operations to try to save his legs. The wing had two spells in Black and Amber, during the 2008-2009 and 2011-2012 seasons, scoring two tries, four conversions and six penalties for a total of 36 points. Steve also represented Cardiff RFC as well as other clubs locally. The collection raised a super total of £374.49 which will be passed to his family very soon. Thank you to all who donated.

There was also a minutes silence for former Friends of Newport Rugby Trust committee member John Barrett who sadly passed away recently. The club sends its sympathies to John’s family and friends.

The team was led out onto the Rodney Parade pitch by Andrew Mann on the occasion of his fiftieth appearance in Black and Amber. Congratulations Andrew! We hope to see many more in future.

Matt O’Brien kicked off with Newport attacking the school end. Cardiff centre Max Llewellyn took the catch and set up the ruck. Instantly there was a flare-up as punches were traded and captains were spoken to. The match restarted with a scrum but Newport coughed up a scrum penalty to give Cardiff field position. The visitor’s Callum Bradbury took the lineout ball before hooker Evan Yardley gained further ground. Number 8 and captain, Morgan Allen punched on further still but the position was lost with Cardiff entering a ruck from the side.

Josh Skinner took a lineout throw at the tail before palming down to the looping Dan Preece. Preece took the contact and popped a pass to hooker Matt Dwyer. The ball spun left via Matt O’Brien back to Josh Skinner who gathered the low pass, took contact himself before popping a pass out to Elliot Frewen in support who bundled over for a try. The referee, Mr Elgan Williams took a few seconds to consult his assistant before awarding the try. Matt O’Brien added the conversion to make the score Newport 7 Cardiff 7 on ten minutes.

Cardiff powered towards the Bisley suite corner from the restart, aided by a yellow card for Newport prop Dan Preece for an offence spotted by an Assistant Referee. While Preece was left to cool his jets for ten minutes Cardiff set about equalising the score. A kick to the corner set up a lineout which became a rolling maul which had flanker James Thomas at the tail, ball on hip, waiting for his mates to find the chinks in the Newport defence. Moments later, he was across for a touchdown. Fullback Edd Howley added the conversion to make it seven points apiece on fifteen minutes.

The visitors began to hit their stride as centre Sam Beard carved through a gap in the Newport defence but was held back as the fabric in his shirt stretched to breaking point. Flanker Alex Everett flew up in support next and was held up short. Scrum half Lewis Jones was repelled efficiently but Callum Bradbury, in the action of lunging over to score, lost the ball forward. The ball whipped up to Matt O’Brien but he was slightly wrong-footed and could only scuff a kick away. Sam Beard restarted his attack and had flanker Everett on his shoulder again. The Newport defence held firm under growing pressure as James Thomas pushed on but he was held up over the line. Relief came when the blue and black scrum was penalised and Newport could belt the ball clear.

Matt O’Brien made a clean break getting to halfway before being snared. Matt Dwyer carried on the attack but Newport were penalised for crossing. Cardiff booted the ball back to the Newport 22 metre line. Following the lineout Newport were nabbed for offside. Cardiff tried to play with the advantage, outside half Dan Fish putting in a cross-kick to the wing but with no return. Edd Howley took the shot at goal but it sailed right of the posts keeping the score at 7-7 on 27 minutes.

Matt O’Brien took the drop-out and kicked long. Cardiff wing Tom Habberfield was back to field the kick and set off infield. He passed out to Dan Fish before a series of simple take, draw and pass moves created an overlap on the far left for James Beal to skate over in the corner. It was simple, well-executed rugby, nothing more. Edd Howley’s conversion attempt went wide making the score Newport 7 Cardiff 12 with 33 minutes played.

It was Newport’s turn to go on the attack as Cardiff knocked on from a lineout. Strong barrelling runs from Dan Preece, Josh Reid, centre Connor Edwards and Elliot Frewen all made dents in the blue and black defence. Frewen popped a ball up to Joe Bartlett to make some more metre-age before a pass whizzed out to the onrushing Connor Edwards on the Cardiff 22, but he was taken man and ball and spilled it in contact. There followed yet another scrum penalty against Newport allowing Cardiff to kick to halfway. Cardiff centre Max Llewellyn had a run but was judged to have been high-tackled as he dipped into contact. This allowed Cardiff to angle to the corner again. James Thomas came up with the lineout ball before number 8 Morgan Allen took a charge. The Newport defensive line moved up quickly but a rapid pass out to second row Sam Pailor saw the big man dive over for try number three. Edd Howley added the conversion to make it Newport 7 Cardiff 19 with three minutes played over the forty.

There was time to restart and Cardiff seemed to be earning a penalty at every breakdown, such was Newport’s inability to gain any impetus. Visiting scrum half Lewis Jones kicked the ball dead to bring the half to a close.

Whilst the score was only 7-19, a not insurmountable target, the way Cardiff were playing, simple passes to players running at speed and a minimal number of mistakes, suggested that it was going to be a tough second half for the Black and Ambers.

The ligh,t misty rain began to fall at halftime suggesting that tactics may vary slightly in this half. Dan Fish restarted for the visitors while Matt O’Brien cleared the ball back into the Cardiff half. The blue and blacks went through their phases patiently, making ground, until a pass to Alex Everett was judged to be forward and Newport could start again.

Possession was lost on 43 minutes when the two lineout ‘pods’ parted company and allowed Cardiff jumper Callum Bradbury to drift across the line and claim the ball. Again, Cardiff built patiently as they progressed up the field. A despairing hand from Elliot Frewen to attempt an intercept may have received a different result on a different day but it still brought about a full penalty. Dan Fish booted his forwards into the corner to launch a rolling maul. The maul rocked, paused, rolled as, again, it sought out weaknesses and, again, it found one as hooker Evan Yardley, having joined the maul at the tail, powered across for Cardiff’s bonus point try. Edd Howley’s conversion sailed wide making the score Newport 7 Cardiff 24 on 47 minutes.

Newport were attacking aerially, and it almost paid dividends on 51 minutes when fullback Edd Howley fumbled a catch. Josh Reid was on the deck to secure the ball for Newport inviting Cardiff to stray offside. Matt O’Brien booted the ball to the corner on the Bisley side. Joe Bartlett took the ball and made a dip at the blindside before being manhandled into touch. From the Cardiff lineout, Luke Crane ripped the ball clear and had Newport going forward again. Josh Skinner and Andrew Mann looked for work while Connor Edwards went closest. Newport had an offside advantage which Matt O’Brien opted to exploit. His quick tap penalty had Josh Skinner surge towards the line but was held up short. Luke Crane appeared to be clear and dived across. Watching through binoculars, as I was, it certainly seemed that Crane managed to ground the ball cleanly. Mr Williams, however, said not. Disappointingly the attacking scrum five was wasted as Cardiff won themselves yet another scrum penalty.

Matt O’Brien passed the ball to replacement wing Harri Lang whose kick to the corner appeared, at first, to be a kick to nothing, but it was weighted such that it stopped dead around the Cardiff five metre line and forced Cardiff’s Gareth Thompson to play the ball with two Black and Amber shirts pressurising him. Newport launched an attack from the lineout on the 22 but got nowhere when centre Adam Jones knocked on in the tackle. Newport appeared to be trying hard but very little was coming good for them.

Llywarch ap Myrrdin chased his own kick ahead while Cardiff scrum half Lewis Jones fumbled the ball into touch. Josh Skinner went to retrieve the ball for a quick throw-in only for Jones to impede him. After some mutual pushing and shoving Skinner lobbed the ball at Jones’ ribs only for the Cardiff man to grab his chest and make a face like he was in excruciating pain. The sympathy from the Newport supporters was understandable. Jones really should seek medical help if his ribs are damaged that easily. Mr Williams spoke with both parties but Jones’ job was done and Newport were denied momentum.

Cardiff launched a 78th minute attack. Max Lllewellyn, the Cardiff centre, carried into contact against Newport replacements Geraint O’Driscoll and Dafydd Buckland. The entire scenario looked awkward as O’Driscoll took an unusual ‘shape’ to his tackle. He suffered for it as he lay motionless on the wet grass as Llewellyn and Buckland got up and moved away. Play stopped as the medical staff got to work on O’Driscoll, Jeremy Williams working on the neck area while the crowd waited for a signal that things may not be as bad as feared. Indeed they weren’t as O’Driscoll was back on his feet in a few minutes and, indeed, indicated that he wished to finish the game. It was down to the far more sensible Head Physiotherapist, and wife, Emily O’Driscoll to decide that that wasn’t happening and Newport had to finish the game with fourteen players.

The scrum restart was wasted by Cardiff as they delayed the put in affording Newport a free kick. Newport looked to run but had little space to run in. Matt O’Brien set up a ruck for Dafydd Buckland to kick ahead but, with time up, Cardiff’s Joe Scrivens gathered the ball and kicked it into touch. Job done for Cardiff.

Newport are next in Indigo Group Premiership action next Saturday with a tricky fixture away at Carmarthen Quins who are going well this season as evidenced by them putting Newport to the sword in the opening round of the Welsh Cup with a fairly convincing display. Newport will have to play very well to come away with the win that they crave. But it is eminently do-able; we have a talented group of players who, once they cut out the errors and concentrate on their own game, are able to beat any team in this league. Let’s start next Saturday.