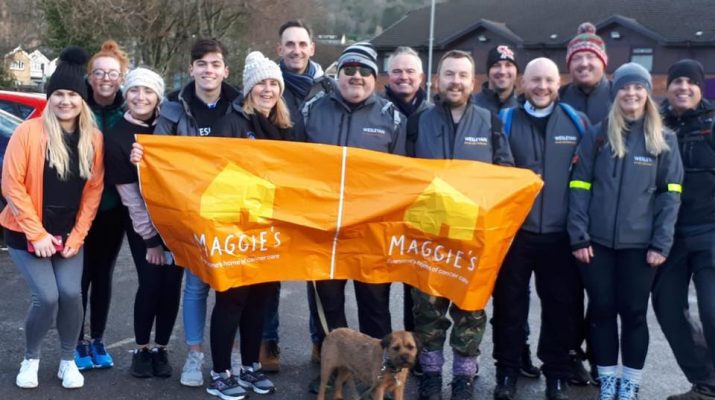 Alun Williams and his South Wales work mates team of Financial Consultants will walk 123 miles from Maggie’s Centre at Singleton Hospital, Swansea, all the way to Wesleyan’s annual Conference in Birmingham! Alun and the team are doing this to show their gratitude to staff from the NHS, and a number of charities that supported colleague Kerry Jones through a life-threatening illness.
Kerry is still here because of the support of his friends, family and carers, along with the wonderful staff of the NHS. Alun and his team wanted to raise money for charity, with Kerry choosing two charities close to his heart. He chose Maggie’s Centre as they were instrumental in coaching and counselling his children through a very difficult period. Secondly, he chose The Old Mill Foundation in Penclawdd – This non-funded Charity has helped Kerry on his road to recovery. He will be treated by them for many years to come. They help him and his family both psychologically and physically, providing care and treatments to aid Kerry’s development on his road to recovery. These are two extremely deserving Charities that we will support alongside Wesleyan’s chosen Charity, Partnership for Children.
If you would like to donate towards this cause and also give Alun and his team some much needed encouragement, you can do so here: https://uk.virginmoneygiving.com/fundraiser-display/showROFundraiserPage?userUrl=walktoconference&pageUrl=3
On another note Newport RFC and Friends of Newport Rugby are pleased to be able to announce that Alun will once again be Master of Ceremonies at the annual Hall of Fame dinner being held on Friday 5th April.