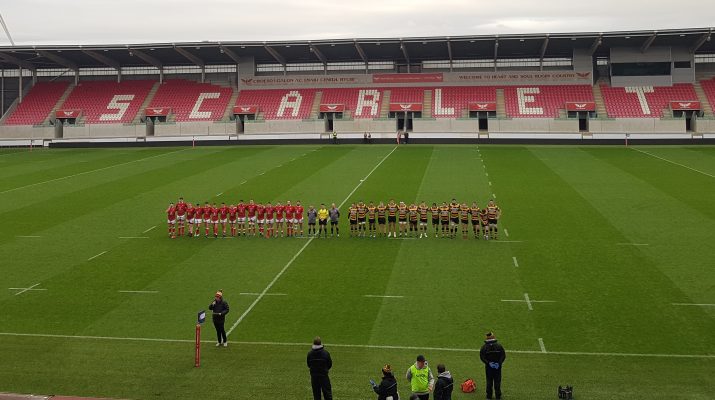 The next outing in the Indigo Group Premiership for Newport RFC was a trip west to Llanelli RFC, a club languishing near the bottom of the league table but with a super away win at Aberavon under their belt in the last round,

It was another grotty journey along the M4 as the rain did its level best to turn south Wales into a series of causeways. With many junior club games falling victim to the weather it was pleasing to see that Newport’s game was to go ahead. Indeed, the playing surface at Parc Y Scarlets looked absolutely terrific.

The Newport team is beginning to have a settled look to it but there were a few changes to the back row. Josh Skinner and captain Rhys Jenkins, so forceful in their play, were injury-enforced absentees so their places were ably filled by Josh Reid, Garin Price and Andrew Mann, with Dan Partridge in the second row.

Careful observers may have noted a curiosity from the kick off; acting captain Matt O’Brien stood aside to let Geraint O’Driscoll start the game. Llanelli worked through a few phases before kicking ahead and then knocking on as Jonny Morris rose to challenge for the aerial ball. A solid Newport scrum followed but the slippery wet ball was spilled in midfield. Geraint O’Driscoll and Matt O’Brien were evidently interchanging between 10 and 12 positions as and when required as O’Brien could be found further outfield making tackles while O’Driscoll made the decisions at times.

A ball cannoning off Dai Richards’ chest led to a scrum which saw Andrew Mann chase around and hustle the Llanelli number 8, Joe Miles, into a mistake, regaining possession for Newport but the old bugbears soon began to resurface as the referee, Mr Mike English, penalised Newport for standing in the scrum. Sospan scrum half Iwan Temblett took the quick tap penalty in an attempt to get his side moving, but a pass out from centre Jonny Lewis floated harmlessly into touch.

Sospan hooker Greg George made a flourish towards the Newport line, with fellow forwards Nathan Hart and Joe Miles carrying the scarlet-shirted attack forward, but aggressive counter-rucking by Newport found Garin Price pop up with the ball before Geraint O’Driscoll booted clear to halfway. Stout defence saw the Black and Ambers push Llanelli further back and force them to knock on as they looked to break free. Luke Crane broke across the blind side and kicked ahead for Jonny Morris to chase before Sospan mopped up. The lineout throw sailed over the head of its intended recipient, Andrew Mann, and into the hands of Garin Harris. Harris initiated the attack, before strong surges by Harry Griffiths and Dan Partridge took Newport to within striking distance, but the ball wasn’t looked after. Seemingly, neither was Partridge’s head as the big man wobbled his way back along the field, patently unclear if it was New York or New Year, to quote Johnny Cash. Checks were made and the ‘Cobra’ was withdrawn from play allowing Kyle Tayler to resume his usual back row berth while Andrew Mann moved forward to partner Joe Bartlett in the second row.

Newport conceded a 17th minute scrum penalty. Outside half Ioan Hughes booted Llanelli up toward the Newport 22. The lineout ball went to the tail of the lineout before the scruffy rolling maul was cracked as the ball spilled backwards. Second row Chris Long and hooker Greg George challenged the Black and Ambers to stop them before the ball whizzed left for centre Johnny Lewis to take the ball at pace and cross the line for the opening try. Ioan Hughes added the conversion to make the score Llanelli 7 Newport 0.

Newport got off the mark just three minutes later as Brodie Coghlan made a terrific charge down of a Llanelli kick. Matt O’Brien released Louis Jones to charge forward towards the posts. Jones set up the ruck perfectly but Llanelli were judged off their feet at the ruck and penalised. Geraint O’Driscoll slotted the simple three-pointer to make the score Llanelli 7 Newport 3.

Llanelli gained another penalty on 23 minutes and kicked to just ten metres out. They threw to the middle of the line, but their rolling maul set-up failed, Greg George popped up in loose play again as Newport were further penalised. Sospan called for a scrum rather than the kickable penalty, curiously, and were rewarded when Joe Miles, the Llanelli 8, was introduced to the touchline by Kyle Tayler.

Llanelli placed themselves much closer on 27 minutes as centre Tom Rogers slipped Jonny Morris’ tackle and placed a grubber kick to the corner. The ball rolled, end over end, across Elliot Frewen’s shoulder and into the dead ball area, giving the home side and attacking scrum, five metres out. Newport managed to overcome this setback, even managing to push away, until another penalty infringement was spotted on 31 minutes. Ioan Hughes, the Sospan 10, had no hesitation in pointing towards the sticks, extending his side’s lead to 10 points to 3.

Newport were being dogged by errors and inaccuracies. Llanelli were not particularly the better team, but they were keeping their mistakes to a minimum and passing out of contact well, meaning that they had the lion’s share of territory and possession while Newport spluttered like an old car on a frosty morning. Josh Reid, making a superb 34th minute turnover, showed how good they could be, but a catch and run by Elliot Frewen, who then ran into the back of one of his own players for accidental offside, seemed typical.

As the half went into extra time Kyle Tayler seized upon a loose Llanelli line out and fed the ball onto Garin Price. Price bludgeoned forward but the ball was knocked forward once Price had set the ruck. Llanelli briefly threatened to burst out, but a timely intervention by Elliot Frewen broke up the fluid handling before Mr English called time with two minutes extra played.

Ioan Hughes restarted for Llanelli, the only change bring Evan Whitson taking the place of Brodie Coghlan at hooker in the Newport pack. Sospan prop Alex Jeffries, formerly of this parish, briefly managed to regain possession for his side but failed to release in the tackle. Geraint O’Driscoll played on and seemed as surprised as anybody to regather his own kick ahead. Matt O’Brien drilled the ball towards the Llanelli corner to enable Newport to set up position. It briefly improved when Ioan Hughes kicked the ball into touch on the full. Joe Bartlett took the lineout then offered himself up as a ball-carrier. Alex Jeffries got his sticky Llanelli fingers onto the ball which led to Luke Crane advising him of the error of his ways. Crane broke with the ball, Josh Reid in support carried the move on but a pass from Joe Bartlett to Luke Crane, in the shadow of the posts, was pinged for crossing.

Llanelli angled a kick towards the corner but Dai Richards inadvertently carried the ball into touch as he tried to rescue it. Joe Miles, the Sospan 8, took the lineout but the attempted rolling maul crumbled. Greg George, their lively hooker, then conceded the penalty allowing Newport to try to clear. Disaster followed, however, as the lineout ball reached Matt O’Brien whose kick was charged down by flanker Nathan Hart. The loose ball skidded around before bouncing up to centre Johnny Lewis who skated across the try line for his, and his team’s, second try. Ioan Hughes added the conversion to make the score Llanelli 17 Newport 3 on 48 minutes.

The Llanelli scrum scored a decisive shove on the Newport pack on 52 minutes as the Black and Ambers were marched backwards, earning a penalty which they kicked to 35 metres out. Sospan punched away in midfield but a spillage allowed Matt O’Brien to apply boot to bouncing ball for Kyle Tayler and Elliot Frewen to chase. Home fullback Kallum Evans was first on the scene but Tayler was a close second and nailed him but Llanelli could clear. Joe Bartlett, jumping tail, took the ball and popped the ball to Luke Crane who scampered forward deep into their 22, before being downed. The ball whipped left again, through the hands, until Elliot Frewen took the pass and crossed out wide. Geraint O’Driscoll’s conversion was wide so the score now read Llanelli 17 Newport 8.

The rain began to fall lightly through the floodlights as Matt O’Brien kicked to the corner and notably pulled up before running gingerly into position. Tom Pascoe warmed up off the bench as Dai Richards made a storming run forward before passing to Luke Crane. An errant hand from Llanelli scrum half Iwan Temblett earned him a ten minute break on the naughty step on 58 minutes as Matt O’Brien jogged off, Pascoe went on to the centre as Geraint O’Driscoll moved forward to outside half.

Newport went to the corner as Joe Bartlett, now acting as captain, took the lineout. Kyle Tayler drove forward as Newport mauled forward. Joe Bartlett made himself available as a runner again and was rewarded with a try as he lurched across the line to top a good individual performance. Geraint O’Driscoll added the conversion to make the score Llanelli 17 Newport 15 and, in doing so, took his place as the tenth highest points scorer in Newport RFC’s long history, replacing Gary Abraham in doing so. Congratulations Geraint! That’s quite an achievement.

While Newport had tightened certain aspects of their performance, the scrum was still a cause for concern. A 68th minute penalty when the front row slipped was one thing, but a 71st minute penalty for not driving straight resulted in a shot at goal for Ioan Hughes to extend the score to Llanelli 20 Newport 15 as the rain fell heavier.

Newport rolled the dice to try to do what Pontypridd had done to them just six days ago. They charged and surged but struggled to pass the halfway mark. Geraint Watkin, on for Luke Crane, spotted a gap behind a ruck to get up to the 40 metre line before Dai Richards kicked to the corner. However, an Assistant Referee spotted a high tackle by Newport as Llanelli countered. Llanelli placed themselves around 30 metres out from the Newport line as they ran through the phases before Ioan Hughes prodded them into the corner. With the lineout won, Geraint Watkin kicked the ball away. Llanelli clung onto it, literally at times, as Joe Bartlett appeared to be over the ball, contesting for it legally while Mr English penalised Newport for side entry to the ruck. With four extra minutes played, Ioan Hughes lined up the penalty kick to deny Newport a losing bonus point. The ball sailed through the posts as the final whistle blew to seal a deflating afternoon for the Black and Ambers.

There is now a break for a weekend as Wales play the Barbarians next Saturday so we have to wait until December 7th for more Indigo Group Premiership action when our good friends from Cardiff RFC visit. The Blue and Blacks are undefeated this season and leading the league by some margin. A perfect time, then, for a visit to Rodney Parade! Our players love games like this and we can be sure that they will be extremely motivated for this fixture. We can’t wait!