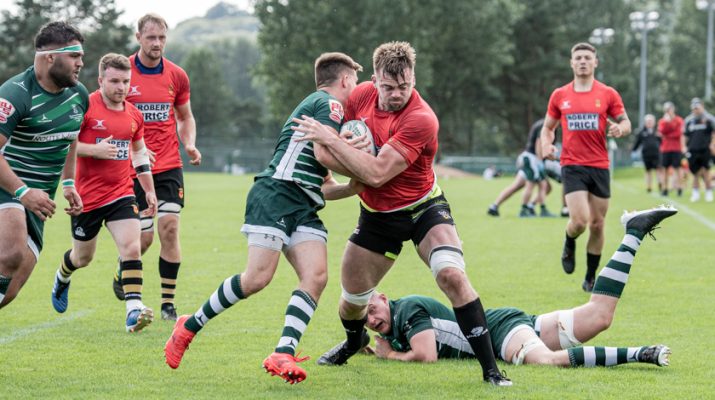 The Black & Ambers were back in action this afternoon after a closely-fought encounter last Saturday at Pontypridd, in which defeat was snatched from the jaws of victory in the final 5 minutes.

The B&As visited Swansea University for the first time in their history for only the second ever meeting between both sides. A Welsh Cup tie had brought the green and whites to Rodney Parade in 1987, where a solitary Tony Coombs try was enough to give Newport a 17-3 win on their way to a run which was ended that season by Cardiff in the quarter-finals.

After torrential rain throughout most of the morning back home, we were greeted with much more favourable weather in Swansea Bay, which encouraged plenty of passing and running rugby, much to the entertainment of the on-looking spectators.

However, it was a forwards’ drive which opened the afternoon’s scoring and put the B&As in front. Ciaran Moore, a recent signing from Moseley, took the credit with Geraint O’Driscoll, the outside-half for the afternoon, adding the extras.

An overthrown lineout by Brodie Coghlan deep in the Newport 22 then lead to a reply from the students, who evened the scores after a quarter of an hour, although the young hooker soon made up for his error with a crunching tackle on a green and white back to stop a promising attack and force a knock-on.

The backs got themselves involved soon after. Further new signings Cameron Lewis and George Gladding found gaps in the defence to earn some good yardage, before another new recruit, Jack Brooks, fed the ball to Ryan Gardner for the returning winger to race into the corner. Gladding took over kicking responsibilities after O’Driscoll picked up a minor knock, but was unable to further extend his side’s lead.

Gardner was soon at it again with a couple of promising attacking runs which got the B&As to within touching distance to the try-line, before a simple Luke Crane pass from a ruck gave Brooks acres of space to stroll over for his second score in 2 games.

The students turned up the pressure at the start of the second period, and soon crossed over again after their scrum-half found a gap around the ruck to race over. The resulting conversion put his side a mere 3 points away.

The B&As were extremely quick to reply and crossed over with a driving maul, a move which appeared to be completed by Henry Palmer. It proved third time lucky for Gladding who finally added his first points for his new club.

Swansea University themselves replied soon after with an impressive kick-and-chase move. The scrum-half again put himself on the scoresheet, having juggled with the resulting bounce but managing to control the ball enough to get his second of the afternoon. The resulting conversion again put the students back within 3 points.

Although not near as bad as last week, Newport’s penalty count was once again a cause for concern, and Cameron Lewis was forced to pay the price during the final quarter. His side’s persistent offside meant the new addition from the Wales 7s squad earned him a 10-minute break on the sidelines, however the B&As managed to restrict the scores to nil during this period and held onto their slender lead for the remaining minutes of the match, despite a solid effort from the green and whites.

The B&As have a break over the bank holiday weekend (from playing at least) before travelling to fellow-Premiership outfit Aberavon on Saturday 4 September (kick-off 2.30pm). Although a friendly match, Newport will be looking to name a near full-strength side to head to the Talbot Athletic Ground, where they haven’t won for 9 years.