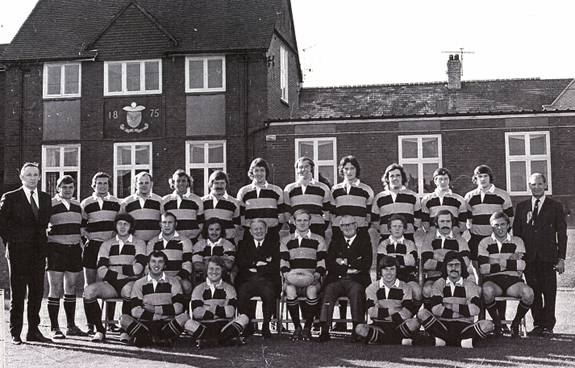 Things did not improve in season 1972/3 under new captain Geoff Evans and in fact the season was one of the powrst on record with a record 28 defeats – some by embarrassing margins, not the least of which was the record defeat by the Barbarians at Easter by 15-60. This was the Baa-Baas biggest ever win against any side. Newport suffered heavy away defeats to Leicester, Bridgend, Aberavon, Llanelli, Neath and Abertillery but prevented Cardiff from winning all 4 matches when they won 7-6 at Rodney Parade in March 1973. Against all odds Newport once again rose to the occasion against a touring side – this time the All Blacks. In a titanic struggle New Zealand won by 2 tries and 4 penalties to a converted try, drop goals and 2 penalties 20-15. 21,000 saw Newport who were sadly depleted by injuries take the fight to New Zealand. Newport never once laid down against the sometimes over-aggressive play by the All Blacks with no fewer than 3 of their side being warned by referee Air Commodore G C Lamb of ERU. Robin Williams kicked a penalty for Newport – one with his left foot and one with his right foot and dropped a superb goal. He also converted Jeff Watkins’s try.

There were a number of factors which contributed to the disastrous season. Keith James joined Cardiff after only 8 games to join up with Wales scrum-half Gareth Edwards, John Anthony had moved to the Midlands and the usual injury bug hit with Roger Francis and Del Haines missing most of the season..

Captain Geoff Evans (47) who never gave up during the tough season and Gerry Fuller (44) played in most of the 51 games (excl Tour games). Robin Williams scored 219 pts in his 31 games as well as 20 more in 3 tour games. Gerry Fuller was leading try scorer with just 10 while Paul Evans and wing Tony Haines managed 9 and 8 respectively. Roger Panting – son of Alf – made his debut as did 2nd row Wales B player Lyn Jones who had joined from Ebbw Vale as had hooker Gerwyn Williams. Other players to make their debuts among the 49 players used were Newport Youth scrum-half Lloyd Davies, wing / centre Phil Ward, hooker Dai Ford and 2nd row Tony Mogridge (Machen). Keith Poole became only the 4th Newport player to pass 350 1st team appearances in their careers with the club.

Newport, criticized by many, went ahead with their South African Tour which was to prove a disaster with 6 defeats in the 6 matches played losing the last vs Transvaal 15-64. They were forced to invite 6 “guests” to make up the squad – England international Ken Plummer (Bristol) and Welsh players Tony Browning and Dennis Hughes (Newbridge), Viv Jenkins and Lyndon Thomas of Bridgend) and Ian hall (Aberavon, SW Police).