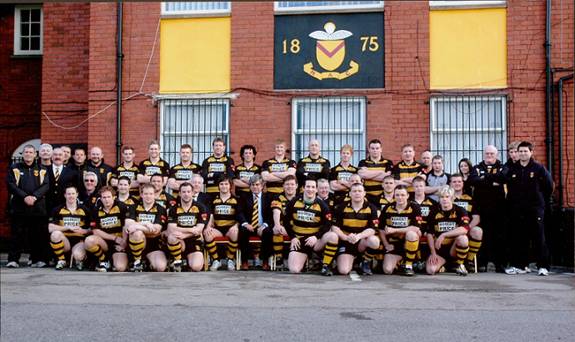 After 4 PSF’s Newport’s season got under way with the visit of Llandovery. The match was preceded by 1 mins silence for former Newport captain and committee member Hedley Rowland who had passed away aged 88yrs. The “Poacher” would not have been impressed with Newport as they lost for the first time ever to last season’s bottom side Llandovery with a dreadful performance. A win at the Brewery Field was followed by another dreadful home performance vs Aberavon. A good win at St Helens saw Newport win at home to Maesteg with a lack luster display. There then followed an horrendous 4 defeats in a row to Pontypridd (A), Glamorgan Wdrs (A), Cardiff (A) – the old enemy’s first win in 9 attempts and Ebbw Vale H). There were ugly scenes at Rodney pared as referee Phil Fear gave Ebbw Vale a last minute penalty try for apparently taking down the scrum. The best showing to date was a home win vs Llanelli (33-19) and a comfortable win at Carmarthen Athletic in the Konica-Minolta Cup. Newport just held off 14 man Cross Keys with a poor performance and the year end on yet another dreadful performance at Bridge Filed when they failed to best use the weather conditions and went down 8-21 to Bedwas. Former Newport player Jason Tovey – sent reluctantly to Bedwas by Dragons management to play at No 10 – had an excellent game at full-back where Newport wanted to play him ! Newport’s poor season continued with the double over Bridgend and defeats vs Aberavon (A) and Swansea (H) leaving just the Cup to play for. Newport won the next two rounds vs Llanharan (H) and Bedwas (A) as well as completing the league double at Maesteg . Newprt then won a good match vs Pontypridd (36-31) which saw both side get bonus points for 4 tries. Neath gained the expected win at Rodney Parade and Newport completed the double at Cross Keys before a makeshift Newport side with permit players Alex Jones (UWIC) and Ashley Sweet (Cross Keys) in their squad pushed Ebbw Vale all the way at Eugene Cross Park. One well before their Cup clash saw Newport see off Glamorgan Wdrs at Rodney Parade. It was a different story at the Memorial Ground when they failed to perform and missed the few chances they created. A complete turnaround saw Newport beat Cardiff 24-10 at Rodney Parade – Newport’s record vs Cardiff is now P10 W8 D1 L1 since 2003/4. At the Gnoll Newport played quite well although hampered with injuries and then went to Stradey for the last time before Llanelli move to Parc y Scarlets. It wasn’t a pretty win but a hard earned one. Newport’s bad old ways returned as they slipped to an embarrassing double at home to Bedwas but they saved their worst until last when they were hammered 36-0 at Llandovery. Newport captain Dai Pattison was sent off by referee Phil Connett on 29 mins. He vented his feelings on a Llandovery player not the officials as Connett thought and the red card was eventually squashed on appeal. Newport were not given a single penalty in the 44 min first half which must be some sort of record. So the curtain came down on a disastrous season and Newport ended with their worst record since the semi-professional era began in 2003/4.

An interesting comment was made by Head Coach Ian Hembrow after the home defeat to Neath. He pointed out that the current state of affairs in the Premiership is not what the WRU originally planned in 2003. “When you have any one team so dominant year in year out, it makes it a strange old league. A couple of clubs are taking the best players, while others are having to survive on the £76,000 annual handout from the Union. The WRU are not even covering squad wages for a year, and all in all it cannot be the league that the Union wanted.”

The statistics tell the story here with Newport’s overall playing record only 48%and conceding more tries than they scored and if it hadn’t been for some large wins against some lesser sides in the Cup then they may have conceded more points than they scored which they did in the league. In the league they conceded 10 more tries than they scored ie 45-55. To a point the pack did the work and it was frustrating to see their hard work wasted when the backs seemed at times unable to get to the try line. Injuries and player availability as usual these days played their part. Newport finished in 7th place in thr Premier league which was their worst ever performance in the semi-professional era since 2003/4. It could have been worse as only the number of wins stopped them from slipping to 9th spot below Bedwas and Llanelli.

On Feb 8th at Maesteg Dan Griffiths finally passed Paul Turner’s all time points record for the club when he scored 1t, 4c, 2p to take his total to 1162 in 130 games. Paul Turner’s record of 1145 pts in 133 games had stood since 1992. He ended the season on 1244 pts from 141 games and received an award from Chairman Will Godfrey in recognition of this feat. He was leading scorer for the season with 197 pts from 28 games. Hooker Andrew Brown made most appearances with 29 followed by Dan Griffiths, Dai Pattison, Scott Williams and Mark Workman – all on 28. Leading try scorers were No 8 Andrew Coombs (6), and back-row Craig Hill, back Nathan Williams and centre Scott Williams on 5.

Dai Pattison, Andrew Brown and Ian Evans were presented with caps in recognition of playing over 100 official games for Newport RFC.

At the end of the season Newport RFC parted company with Head Coach Ian Hembrow and Sven Cronk would be next season’s Head Coach. 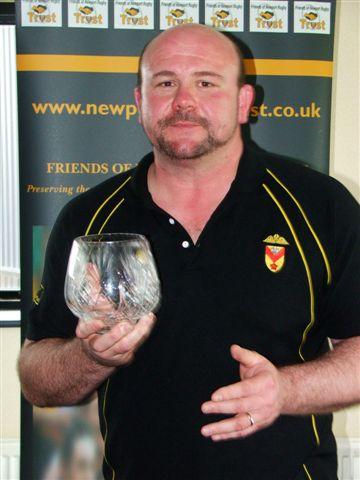