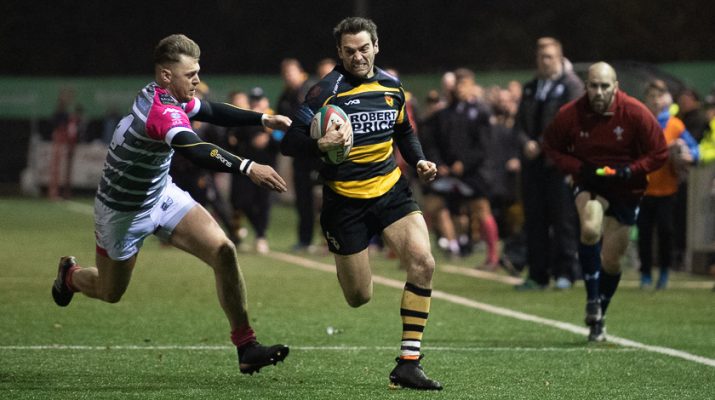 The year is 2006. It’s a pretty different world. A world without the iPad, Whatsapp, Instagram, even RGC 1404. Prop Dan Preece was representing Wales Youth and full-back David Richards had just started junior school!

This was the last time the Black & Ambers had won at Sardis Road. Since then, it’s been a painful 13 defeats on the bounce, some agonisingly closer than other, and they were certainly out to bring that to an end. Recent meeting at the so-called ‘House of Pain’ have been very high-scoring, with the peak of the lot coming last season when Ponty edged out 47-45 winners despite a gallant late fight by the B&As.

This was another high-scoring encounter, and it was the away side who kicked-off the scoring. After Jon Morris’ stretch over the try line was ruled out by referee Elgan Williams, ‘Seren y Gêm’ Matt O’Brien gave his side an early lead, before both teams exchanged a try each.

The first of Ponty’s tries came from Alex Webber after 15 minutes, before Newport replied with the first of theirs came soon after, when O’Brien and Elliot Frewen took advantage of some rare gaps in the defence to put in Morris who was able to stroll over the line and under the sticks.

Last season having been allocated from the Dragons Academy, Corey Howells made an instant impression in Black & Amber, most notably against this evening’s opponents in front of the Rodney Parade faithful but the Newport-born and bred youngster came back to haunt his old side and replied almost instantly with a try of his own. The B&As’ response to that was another O’Brien penalty.

Then came the ten-minute period which probably settled the game. Two catch and drive tries by the powerful Pontyridd pack and a superb 80-yard play, certainly worthy of Try of the Week, stretched the gap to 20 points at half-time. There was certainly plenty to ponder in the dressing room.

The B&As were given a lifeline soon after the restart, when opposition scrum-half, Jamie Hill, was shown a yellow card for what was deemed a deliberate knock-on in a good position for the away side. Newport then had plenty of opportunities to bridge the gap, but many of which weren’t taken. A wide pass to Chay Smith ended up in the terrace rather than the centre’s hands and Harri Lang came close to touching down in the corner but was dragged out of bounds.

However, the B&As did score two unanswered tries courtesy of Frewen and Joe Bartlett. The winger did manage to reach the corner and a series of great plays gave the second row his second score of the season. But whatever B&As did, Ponty were determined to do too.

Substitute Harri Lang was ordered to the bin and the home side made their visitors pay. A poor lineout and a 90-metre sprint gave Dale Stuckey and Alex Webber a try respectively, which in effect made it ‘game, set and match’.

The B&As’ only realistic hope in the final 10 minutes was to get a bonus point and they had some great chances to secure it. A classic Elliot Frewen move led to a cracking 40-metre run which fooled the Ponty defence and a subsequent drive by the forwards within the 5-metre line came extremely close, but sadly both proved unsuccessful and the Black and Ambers left a cold Sardis Road empty-handed.

The B&As will be hoping injuries to Dan Preece, Jon Morris, Rhys Jenkins and Matt O’Brien are not as serious as first appeared and we wish them all a quick recovery. It doesn’t get any easier for the ‘Port as December  sees trips to Merthyr (1 Dec), Llandovery (8 Dec), Bargoed (22 Dec) and Cross Keys (29 Dec), with the welcome of Carmarthen to Rodney Parade (Sun 16 Dec) in the middle. Your support has been crucial so far this season and we look forward to seeing you again supporting your city, your club.