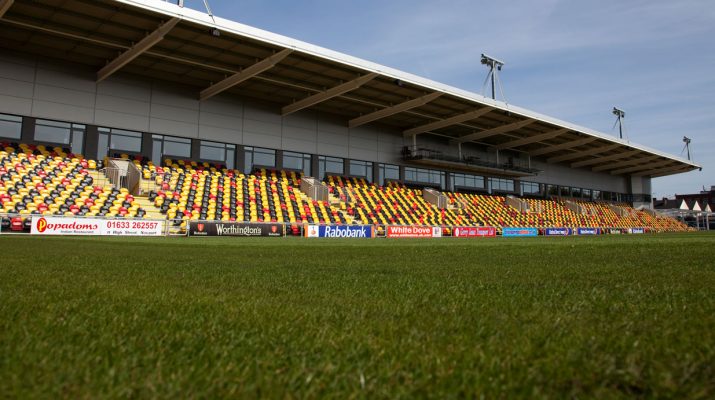 The game started in constant drizzly rain and it was no surprise that there were a couple of knock-ons which gave Newport the first scrum.  The Newport supporters were pleased that the scrum was solid and the ball won with ease.  Another scrum followed and Ebbw were in trouble as the visitors applied the pressure.  Penalty to Newport, kicked by OB.  Ebbw were quick to respond and drove forward with their forwards carrying the ball through phase after phase.  The ball was moved left and the Ebbw winger was tackled inside the Newport 22.  The ball popped out and the quick-thinking home scrum half snatched it and squeezed down the blind side for a try. Great conversion by Rhys Jones and it’s 7-3.  More Ebbw pressure and Newport defender penalised for deliberate knock-on. Kicked to the corner, five metres out and the home side prepared for their well known catch and drive.  Newport defended well and play moved to the other side of the pitch for a Newport line-out.  The ball was won but Ryan’s long flat pass was in front of the Newport centres and Carl Meyer grabbed it and got over the line.  The easy conversion was kicked by Rhys Jones and the home side are ahead 14-3 within ten minutes with the visitors wondering how they could be behind. After OB missed a penalty chance Rhys Jones kicked one and the home side now lead 17-3.

Newport continued to press forward and had the home scrum in trouble leading to a hurried kick going straight to touch.  We then saw twelve minutes of rugby when the Black and Ambers played some sublime stuff and turned the game.  Constant pressure and brilliant handling by backs and forwards saw OB burst through the middle, commit the last defender and put Chay Smith in for a wonderful try. More pressure on the home line with forwards battering away through phase after phase and OB skips through and runs around behind the posts for the second try.  The Black and Ambers weren’t finished and another period of constant pressure and great handling from forwards and backs with Henry Palmer, on as blood replacement, showing great skill as he draws two defenders before popping the ball up to Elliot Frewen who touches down near the posts.  OB converted all three tries and the score is now 17-24.  Ebbw keeps pounding away and gets a penalty under the posts which is converted by Rhys Jones. The referee blows for half-time and gives players and supporters chance to get their breath back.

The home side kicked off but Newport secured the ball and took it through phase after phase to get in the home twenty-two.  Desperate Ebbw defending leads to a penalty which OB puts in the corner.  The line-out drive is held but Newport get the scrum.  The away supporters were licking their lips as this might lead to the fourth try but the referee awarded Ebbw a penalty for ‘not binding’ and Carl Meyer reached touch on the halfway line with his kick.  Both sides were carrying the ball well but both were kicking a lot too.  Newport were winning the kicking contest with both half-backs putting the catcher under pressure whereas Ebbw’s kicks tended to be too long and were fielded cleanly and used to set up another attack. With ten minutes to go the Black and Ambers were awarded a penalty on the home ten metre line and OB kicked a beauty to increase the margin to seven points. Ebbw pressed hard for the last ten minutes and really put in a big effort to get something out of the game but the defence held.  Ebbw scrum in Newport twenty-two but again pressure resulted in a penalty which OB put into touch. The ball was kept for the last few minutes and the game was won.

This was a fine victory with the whole team playing their part. The line-out drive was nullified and the big Ebbw ball carriers were stopped.  The coaching team are to be congratulated too for deciding on the tactics and selecting the fifteen players to do the job. Ebbw are a good team and there will not be many sides getting a win up there.  Newport had to be at the top of their game to get the win.  It seemed wrong to pick a man of the match after that performance by the whole team and replacements but Ryan James gets it for his all-round play, his accurate kicking and his tackling of big men around the fringes.

Next up is Pontypridd at Sardis Road.

FoNR will be running a coach so make sure you book your place.