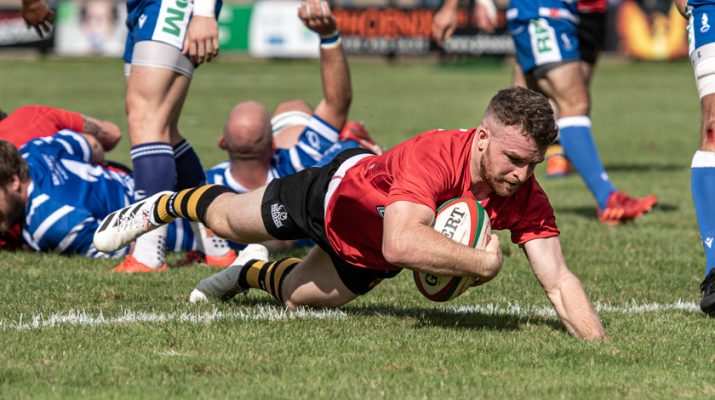 Another bright and breezy afternoon saw the final friendly fixture in Newport’s pre-season preparations; hopefully some of the enterprising rugby from the Aberavon fixture would re-surface at the Brewery Field to provide an entertaining afternoon.

There were several personnel changes as the coaching team had a look at players and patterns before the first competitive fixture of the season, away at Pontypridd on Saturday 18th September. Promising Will Reed started at 10, Ben Roach at 8, with Cameron Lewis at 12. Josh Skinner lead from the front as captain.

The refereeing team for this fixture had Gwyn Morris in the middle with John Darcy and Aaron Cross assisting him.

There was a minutes silence before kick off to commemorate the sad anniversary of the Twin Towers terror attack, and the loss of thousands of innocent lives therein.

Bridgend’s Matthew Jones, he of former Neath and Dragons fame, kicked the game off as Newport attacked the ‘town’ end of the ground. Elliot Ferriman took the catch and set up a drive. Kyle Tayler took a gut pass to carry on the move before Luke Crane kicked. Reuben Tucker, formerly of this parish, took the ball for his new club but Ryan Gardner, following up doggedly, ensured that the Ravens could make no use of possession.

Luke Crane opened the scoring for the Black and Ambers. Bridgend had shipped several penalties early on, this one for not releasing in a tackle. Will Reed took the tap quickly and got close. Louis Jones had a dip at the line before Reed, again, jinked and made space for Crane to cross just right of the posts. Reed added the conversion to make the score Bridgend 0 Newport 7 on 11 minutes.

Bridgend were struggling to gain decent possession but, on 15 minutes, they did create something when Edd Howley, another former B&A, found an overlap and fed the ball to scrumhalf Paul Short. Elliot Frewen was on hand to stop the attack dead, but a penalty was conceded in doing so. Matthew Jones went to the corner encouraging his forwards to bash away at the Newport line. Reuben Tucker came close, but hooker Matt Dwyer turned him onto his back in the tackle thus preventing the touchdown. Bridgend went to the corner again, but the ball was hideously overthrown allowing Kyle Tayler to seize the ball and Ryan Gardner to carry away from danger.

George Gladding showed his potential from fullback as he made a good break on 22 minutes. He had Jonny Morris running a terrific support line and, in turn had Elliot Frewen to his left. Frewen was tackled inside the Bridgend 22 metre area but the defenders fumbled, and Newport were awarded an attacking scrum just ten metres out. The break from the scrum seemed ponderous as Newport appeared tardy in support; two or three Newport players were usually met by three of four Ravens, an issue which seemed to persist less as the game wore on. Newport were awarded another penalty as Bridgend impeded again. Will Reed opted to go to the corner. Joe Bartlett caught his lineout ball, which was good, as the Newport big boys battered the line – Matt Dwyer and Garin Harris made pushes before it as spread to Cameron Lewis at 12 who scrabbled across the line for a hard-earned try, Reed added the extras again to make it Bridgend 0 Newport 14 on 26 minutes.

Bridgend had no answer at this point; a tidy-looking driving maul was stopped before our own Ben Roach popped up with the ball. It wasn’t too long before the next score came. Elliot Ferriman, freshly back off his honeymoon, burgled the Bridgend lineout while Garin Harris thrust his newly aerodynamic frame into the defensive wall. A minute gap appeared, just enough for Elliot Frewen to exploit as he took the pass, juggled the ball and dotted down for a try which had the home supporters deflated. Will Reed added the conversion again to make it Bridgend 0 Newport 21 on 33 minutes.

The Ravens finally struck back on 39 minutes as the drove into the Newport wall. The defensive tackling appeared sound, but centre Tom Morgan picked the perfect line to shatter it as he took the pass and crossed for a try. Matthew Jones added the two-pointer to make it Bridgend 7 Newport 21 at halftime.

Bridgend pulled a dastardly trick at halftime by putting Jamie Murphy on at 10. He does seem to have an ability to unpick our defence at times and needs constant monitoring. A neat pass from him almost caused damage early in the second half but Elliot Ferriman wrapped the situation up neatly.

The Newport lineout was becoming a real cause for concern; the change of hooker to Brodie Coghlan had supporters optimistic of a cure but the niggles carried on. Whether it was communication or timing we’ll never know, but the coaches will need to work on this before next weekend.

Bridgend had found some vigour in their attack. A super running line allowed them into Newport’s 22-metre area. They stuttered in attack a little until Murphy pulled a splendid pass out of his bag of tricks, out to Edd Howley who kicked on ahead, chased and touched down. Murphy added the conversion to make it Bridgend 14 Newport 21 on 50 minutes.

The game was opening up as knock-ons and wrong options were making for an entertaining game as both teams fought for the win. A Bridgend attack appeared to have floundered on 59 minutes until Murphy, again, made a silk purse out of a sow’s ear as he floated a pass out to Edd Howley who fed wing Caine Woolerton to canter across for a try. That made the score Bridgend 19 Newport 21.

Another Newport lineout went wrong as a penalty was conceded for impeding the jumper. Murphy wanted his sides’ nose in front; his option for the penalty kick was brave but ultimately fruitless.

Mr Morris had cause to speak with both front rows on 74 minutes but, evidently, it was the Bridgend boys who failed to pay attention as the referee’s arm went up in Newport’s favour. Will Reed kicked Newport to ten metres out as the lineout reverted to basics: get a light, loose forward jumping at the front, and hold him there. Kyle Tayler was wanged up first with a positive outcome until Bridgend transgressed yet again. Next Ben Roach was jumping front. The take was good, Henry Palmer latched on the back but the Ravens’ Tom Lucas, yet another former B&A, was found to have dragged the maul down leaving Mr Morris no option but to award Newport a penalty try. This made the score Bridgend 19 Newport 28.

Bridgend threw the kitchen sink at Newport as they tried to snatch something from the fixture but the Black and Ambers were resilient. Bridgend hooker Merriman came close but was downed. They threw their big men into attack but only came across Newport shoulders eager to tackle. Murphy couldn’t conjure any more magic with the scraps of possession he was getting. Predictably, as Bridgend went longer in attack, the more jittery they became and the ensuing knock on seemed inevitable, somehow.

As we mentioned earlier, Newport are in action next Saturday, 18th September when they travel to Pontypridd in an Indigo Group Premiership Cup competition fixture.

Newport RFC Man of the Match – Will Reed