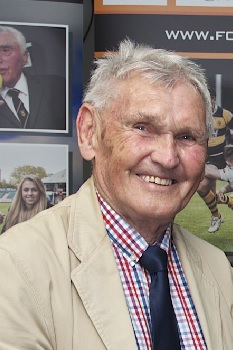 Mr Newport. Brian, or 'BJ' as he is universally known is a Newport RFC legend on and off the pitch.

A 15 year playing career with 330 appearances and 566 points is just the start of his remarkable achievements. Capped twice by Wales he is famous for being only one of two welsh men ever to beat South Africa, Australia and New Zealand all whilst playing for club teams. Brian defeated New Zealand in 1963 and Australia in 1957 for Newport RFC and South Africa whilst representing the Barbarians in 1961.

A former captain, coach and chairman of the club, BJ returned to the management committee in 2017 during the semi-pro era as club ambassador and is now club president.