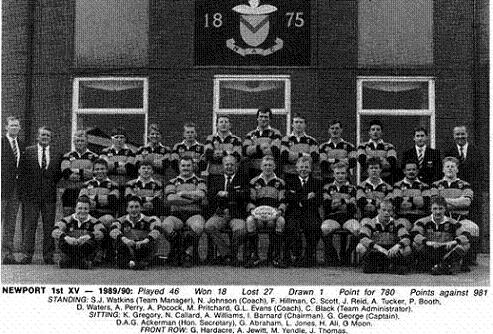 1989/90 saw Glenn George continue to lead the side in a season of mixed fortunes. Fullback Jon Callard joined Stuart Barnes at Bath RFC but Matthew Silva the Welsh Youth fullback joined only to then join Pontypool. Brian Bolderson joined from Glamorgan Wdrs only to receive a serious injury at work. Byron Hayward, who had scored a record 348pts at Abertillery, then joined before switching to Newbridge. Scrum half Ceri Jonathan and outside half David Phillips joined Pontypool while Marc Batten, David Wood and David Pitt retired. Batten has scored 109 tries in his 197 1st XV appearances for Newport. Young future international prop Marc Davis made his first appearance. Not surprisingly there was limited success in the first 3 months of the season and wins against Pill Harriers, Penarth, Tredegar, Aberavon, London Welsh and Beddau were matched by defeats – some heavy – by Coventry, Pontypool, Neath, Swansea, Cardiff, Newbridge, Barbarians, Llanelli, Gloucester, Pontypridd, Moseley and the All Blacks (54-9). For once Newport were no match for a touring side and the powerful New Zealand side under captain Wayne Shelford demolished Newport with 10 tries to 1. Hooker Kieron Gregory got Newport’s only try and Gary Abraham converted the try and dropped a goal.

On the evening of Weds November 22nd 1989 Newport slipped to yet another disappointing defeat at Abertillery Park but the observant among the Newport faithful supporters would have noticed a larger than usual gathering of former Newport players. This was significant as these players wanted to halt Newport’s decline and had made overtures to the Newport Rugby Committee. Coaches Keith James and Jim McCreedy resigned and former players Gareth Evans and Nev Johnson were appointed coaches with Stuart Watkins as Team Manager as from the Pontypridd game on Nov 24th 1989. Form continued to be unpredictable with wins over Bristol, Glamorgan Wdrs, Treherbert, Pontypridd (cup) and a draw against Gloucester tempered by defeats against Nottingham, Ebbw Vale, Swansea (twice incl cup) and Bridgend. A purple patch followed with splendid displays vs Ebbw Vale, Llanelli, Cardiff (A) and Cross Keys ended with defeat at Pontypridd. More defeats followed until the end of the season and there was an obvious need for new talent and experience if Newport were to gain promotion the following season to the Premier League in the new Welsh league format. Over 100 years of illustrious history did not count as much as several recent seasons of poor form and Newport were consigned to what was effectively the second level of the new WRU League format ie Division One. Significantly for Newport Welsh International out-side half Paul Turner returned to Rodney Parade and played at Treherbert in the Welsh Cup on Dec 16th 1989

David Waters passed 550 appearances and Rhys Morgan retired after a magnificent 539 apps as did Roger Powell on 341. Top points scorer was Gary Abraham with 131pts and Paul Turner with 70pts in 15 games. Top try scorer was wing John Thomas with 12 and appearances were led by Phil Booth (37), Glen George (36) and David Waters (35)

Mark Yendle and Andrew Lewis were part of Wales U21 squad and prop Mark Davis in the Wales U20 squad. Kieron Gregory and Glenn George who played consistently well through the season played for the Barbarians and Kieron was also picked for the Welsh squad to tour Namibia while Glenn was on standby.

Two matches were played in Spain in May 1990 under Team manager Haydn Mainwaring. Coach Nev Johnson and Captain Glenn George – both were won with Paul Turner contributing 14 conversions. Newport scored 100 pts and conceded just 1 single try on the 2 match tour. 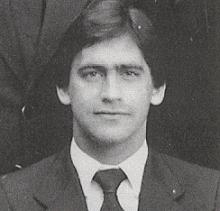 Gareth Evans – would be appointed Head Coach for the following season and the start of Leagues in Welsh Rugby.