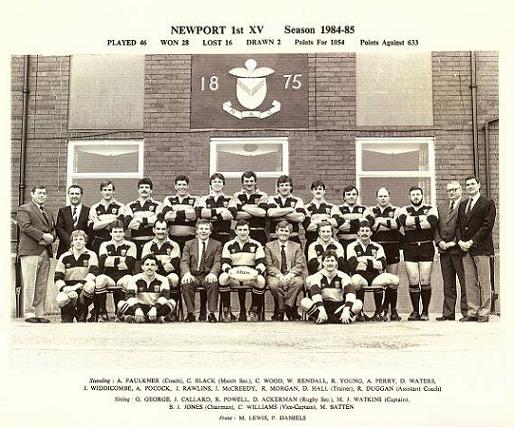 Mike Lewis played all 25 games to the end of December and scored 264pts and looked set to break Laurie Daniel’s long standing club record of 305pts set in 1971/2 while wing Marc Batten had scored 22 tries in 22 games. However following the Torquay game on the last Saturday of the year Mike Lewis shocked Newport when he decided to work and play in Italy following the long NCB strike which had proved a hardship for him and his family. The next 3 months saw injury hit players Batten, Coombes, Morgan, Widdecombe, Rendall and Powell and Newport won 6 and lost 6 of their 12 matches including a 3rd round loss to S W Police at Rodney Parade in the Welsh Cup. Newport did recover to win their last 6 matches in April with impressive wins over Bath and London Welsh the English Cup Champions and runners-up. Mike Watkins resigned from the Welsh team captaincy but decided to continue at club level for Newport. He played for the Barbarians and completed 40 appearances for Newport 1st XV. He was followed by vice- capt Chris Williams (38), Richie Collins (38), John Rawlins (35) and David Waters (35). Top points scorer was Mike Lewis with 264pts from 26 games while Marc Batten scored 24 tries in 32 games. Young fullback Arwel Parry scored 89pts in the last 11 games including a 51yd penalty to finally beat Pontypool at Rodney Parade after 15 consecutive defeats against their neighbours.

David Waters passed 350 career appearances. Keith James passed 250 and Roger Powell 200 while Rhys Morgan neared an incredible 400. In all 51 players were used during the season. Andrew Perry won the Boucher Cup and Keith James the Webber Bowl.
Mike Watkins captained Wales vs Australia before retiring from international rugby. He made his Barbarian debut also and played for them vs Australia. David Waters was picked for Wales vs England and also France but both the games were postponed due to the “big freeze”. He failed to win his cap during the season but played for played for Wales B and the Barbarians.

Newport played 2 matches in May in Spain and won both easily. Jeff Watkins was Team manager. 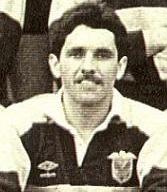