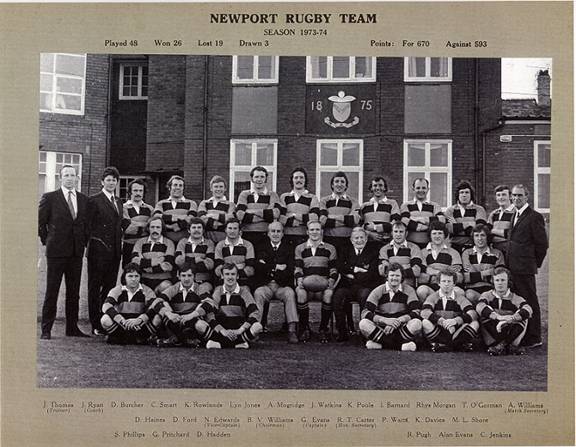 The Barbarians President Brigadier Glyn Hughes said after the 15-60 defeat during the previous season “Newport is a very famous club. You may have gone through a bad spell but you will surely rise again !” In season 1973/4 still under captain Geof f Evans there was some light at the end of the tunnel. Newport appointed former Newport and London Welsh player John Ryan as coach. He would eventually become Cardiff and then Wales coach in 1988.He had been Newport HSOB coach and would have been Newport United coach except the the WRU objected to former player Brian Price being re-instated as an amateur. His influence and tactical expertise together with the inspiring leadership of Geoff Evans gradually brought about a change and an end to the club’s decline.

In the first three months of September, October and November Newport lost 11 of their 19 matches with just 5 wins but during December they started to get the result that they deserved with 5 wins out of 6 matches played. January saw a decline with a further 3 defeats from 4 matches. However from Feb 23rd onwards – a 33-7 win at home to Blackheath – they never looked back and they had an excellent run in with 15 wins from 19 matches including impressive wins vs Cardiff, Harlequins, Moseley, Aberavon, Gloucester, London Welsh and the Barbarians as well as an unbeaten tour of Cornwall.