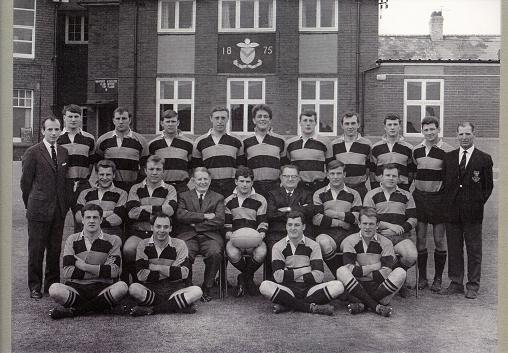 David Watkins continued as captain for 1965/6 which saw Newport play 50 matches for the first time ever. It was to prove to be a difficult season with player comings and goings, injuries and international calls.

The most sensational newcomer was centre Keith Jarrett from Monmouth School. He played 18 games and scored 122 pts with his phenomenal place kicking and scored a record 19 pts on his Wales debut vs England playing out of position at full-back. Relieved of place kicking duties John Anthony developed into a fine full back. He went to Cambridge University and won his Blue. Tough new centre Dai Cornwall played 28 games but missed a few due to injuries. Scrum-half Cliff Williams had turned professional the previous season but Welsh reserve Gwilym Treharne arrived from London Welsh and played 4 games. He was the 5th scrum-half to be tried after Gary Briggs, Huw Jones, John Rogers and Jeff Palmer (Newbridge). Popular centre Del Haines (Cross Keys) made his debut but was to switch later to wing forward with great success and would make over 200 appearances for Newport. Young back row Keith Davies was another new face as was hooker Peter Rose. Back row Ray Woodman made hi s debut and would eventually play for Rhodesia vs Newport in 1973. There was a major disappointment with the 3-3 draw with the touring Wallabies in November. Australia had gone into the lead after only 5 mins with a try by wing S Boyce but they seemed intent on just holding onto their lead and were at times very negative. David Watkins equalized with a penalty goal but then Newport were reduced to just13 men when both centre Dai Cornwall and Gordon Britton were injured. Even this did not change Australia’s style of play.

Newport won the Snelling 7’s at Cardiff , They beat Maesteg, Llanelli, Bridgend and old rivals Cardiff in the final (21-15) in front of 40,000 people. Star player David Watkins who was awarded the Everson Trophy for Man of the Tournament – the first ever recipient of this trophy, damaged his achilles tendon but after immersing his foot in a bucket of ice water he came out for the final to face Cardiff who included Welsh stars Maurice Richards and Gerald Davies. This was to be the end of Newport’s golden era of Sevens but what an era it had been. In the 14 yrs that the tournament had been held they had reached 13 S/F’s and 12 Finals winning an incredible 9 and runners-up in another 3. They had won 47 of the 52 games they had played and had produced stars such as backs Ken Jones, Malcolm Thomas, Roy Burnett, Brian Jones, Gordon Britton, David Watkins, Bob Prosser, John Anthony and forwards Bryn Meredith, Brian Price, John Jeffery, Glynn Davidge and Brian Perrins. Incredibly they were to win the title only one more time until the tournament was ended in 1995 although they did appear in a further 7 finals. David Watkins never played on a losing 7’s team for Newport ands was arguably the greatest ever 7’s player of his time.

Wales won the wooden spoon but were saved a whitewash by Keith Jarrett’s remarkable debut at full-back vs England in the last match of the season. The week before he had played vs Newbridge in that position at the request of the Welsh Selectors but he was so out of place that captain David Watkins switched him back to centre at HT. Keith scored a then record 19 pts from 1t, 5c and 2p and the only kick he missed rebounded from an upright. Great credit has to go to club-mates David Watkins and Stuart Watkins who coached him and looked after him during the match. Also in that game was Brian Price who was vice-captain with David Watkins captain. David had been restored vs France in place of Barry John who had been on the losing side for both of his Wales appearances. 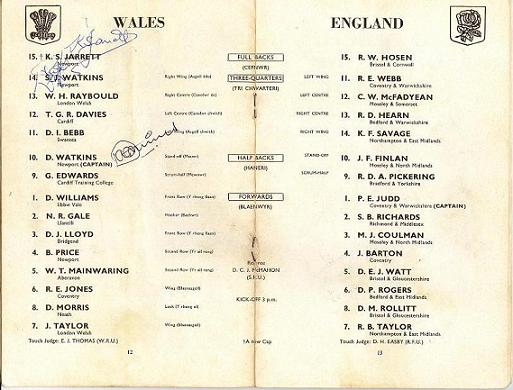