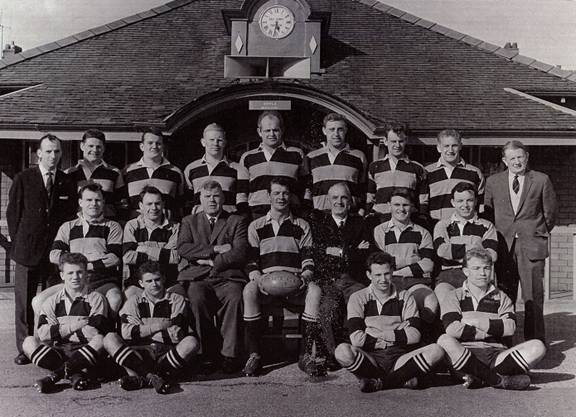 Newport had two main problems during the season – the great freeze which meant no matches were played during january or February 1963 and the injury to captain Glynn Davidge who had slipped a disc on the lions tour and was ruled out until Dec 1st 1961 vs Bristol. Brian Jones stood in for much of the season. It was strange how the injury or illness voodoo had hit Newport captains since the war. Davidge was the 6th to date to be hit following Hedley Rowland 1948/9, Bob Evans 1951/2, Malcolm Thomas 1954/5, Leighton Jenkins 1957/8, Bryn Meredith 1958/9.
Notable new-comers this season were the prolific round the corner kicking full-back Ray Cheney from Pontypool who had been Welsh reserve, young centre / outside-half Eddie Mogford , prop / hooker Brian Perrins and back row John Mantle. Mantle would eventually play for Wales and turn professional with St Helens RL and become a league star playing for Great Britain.
Newport got off to a very good star twinning 4 and drawing 1 of their first 5 matches which included a record 30-0 win over Bristol. Then came the shock of 3 away defeats in a row to Pontypool, Llanelly and Cardiff which exposed some problems not least of all poor tackling and defence. Wins against Bristol an Blackheath gave temporary relief but then unbelievably lost 3 home matches (Pontypool., Gloucester and Wasps) in a row in October. This was Pontypool’s first double in nearly 30 yrs and the biggest ever Gloucester win (0-16). This defeat on Oct 20th 1962 coincided with the opening of the new £40,000 Social Centre at Rodney Parade by Lord Brecon. Five further defeats followed in November and December interspersed with good wins against Cambridge Uni (22-3) and Leicester (12-3). The defeat to Watsonians on Boxing Day gave Newport the very poor playing record of P23 W10 D2 L11. Incredibly form then on the record improved quite dramatically and until the end of the season they played a further 19 matches with a record of P19 W16 D1 L2 with the only defeats being away to Gloucester (3-8) and Swansea (3-5). Davidge had returned early against medical advice but he and the team played some fine rugby with great wins away to Cardiff, Wasps and Aberavon. They beat the then Welsh unofficial leaders Bridgend 22-8 and Ebbw Vale 19-3 and they ended their home programme with a magnificent 16-15 win against the Barbarians.

Fullback Norman Morgan played 9 games and scored 34pts and decided to retire. He had given Newport great service and had set a club record of 951 pts in his 209 games for the club since 1955. Newport were fortunate to have Barrie Edwards, who was top scorer with 62pts and then Ray Cheney (40pts) to take over the full back role. Wing positions were shared by Byron Thomas who was probably the best, Dennis Perrott, Clive Lewis and Peter Rees. Lewis scored 8 tries and decided to retire having scored 73 tries in 126 games since 1956. He was a Welsh trialist during his career but never quite fulfilled his early promise but was hampered by injury at crucial times. Top try scorers were Byron Thomas and the impressive flanker John Anderson with 15 each. Brian Jones fully returned to form and scored 11 tries as well as doing his hare of place kicking. Bob Prosser and David Watkins at times showed their real class with Watkins winning his Welsh cap but now and again they lost their way. The forward eventually developed into a powerful pack and Graham Bevan who had stepped into Bryn Meredith’s shoes had an excellent season both hooking and in the loose. Greenslade and Johnson were two of the best props in Welsh rugby and Ian Ford (the first Newport player to pass 400 appearances) and Brian Price were excellent in the powerhouse second row and line-outs. The back row of Anderson, Davidge and Alan Thomas was outstanding. Anderson broke the club record of 14 held by Wallace Watts and Dick Sheppard by scoring 15 tries as a forward but sadly for Newport he decided to turn professional and join Huddersfield RL when on the verge of a Welsh Cap.