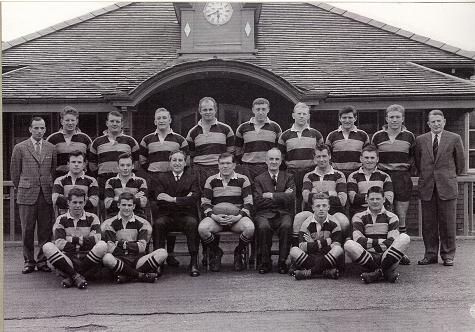 Bryn Meredith was captain for what was to be an eventful season in 1961/2. A young 18 yr from Cwmcelyn Youth arrived at Rodney parade. He had played a few 1st class games fro Abertillery and Ebbw Vale. Some eyebrows were raised when he replaced popular Geoff Davies at outside-half in the first match of the season vs Penarth. Newport won 34-6 , Watkins scored a try and Newport and Watkins never really looked back in the season in spite of few hiccups. A number of key new players joined that season also. They included wing/centre Dennis Perrott from Abertillery, wing Byron Thomas, centre John “Dick” Uzzell (Cross Keys), hooker Vic Perrins, wing forward Alan Thomas from Tredegar – he would play all 44 games + 2 unofficial in the season. Perrins and Thomas would play for Wales in the future. Scrum-half Bob Prosser – a student at Cardiff and reserve at Coventry was another new face who was to form such a great half-back partnership with Watkins. Once he made his debut at London Welsh on Nov 25th he became a permanent fixture of the team and would make 60 consecutive appearances before a hand injury intervened for a while. It soon became clear that David Watkins was destined for great things and his darting elusive runs were a joy to watch. In his first season he had a Welsh trial (opposite Geoff Davies), was Welsh reserve vs France and was picked for the Barbarians.
Prosser and Watkins were the ideal half-backs to support a very strong pack led by Glynn Davidge and Bryn Meredith who had an outstanding season and was picked for his 3rd British Lions tour. Meredith had props Des Greenslade, who won his Welsh cap and Nev Johnson, 2nd rows Ian Ford and Brian price and the incomparable back-row of Cresswell, Davidge and now Alan Thomas. Such was the competition that John Anderson switched from centre to wing forward with such success that he deposed international Brian Cresswell. In the three-quarters there was Brian Jones who also did his share of goal kicking, Dennis Perrott and, Peter Rees with promising newcomers Dick Uzzell and Terry Pope. The main full-back was Barry Edwards but in January 1962 Norman Morgan made a come back after his knee injury and held the position until the end of the season.

From Dec 27th 1961 until the end of the season, Newport had a phenomenal run of success in 29 matches only losing 2 matches with the result they finished as Welsh Champions ahead of fancied Ebbw Vale, Neath and Aberavon. Newport lost 8 games during the season to Cardiff (2), Bristol, Neath, Bridgend, Cambridge University, Abertillery and Wasps. Alan Thomas (44) did not miss a game and showed real promise of what was to come. Brian Jones, Ian Ford and Brian Price played in 42 games. Ian Ford passed the club all time record of 373 appearances held by Roy Burnett on the Devon tour in April 1962. Peter Rees as usual scored his quota of tries – 17 from 37 matches with Brian Jones getting 14. Norman Morgan was top points scorer with 18c, 10p and 1dg from his 17 games – a total of 69 pts. Future Welsh hooker Vic Perrins made his debut.

Newport again won the Snelling 7’s but the team with the superb David Watkins, considered by many to be the best ever 7’s player and never played on a losing team for Newport, were considered to be the best in their history. The team won the 7’s for a record 3 consecutive years in 1961, 1962 and 1963. The team for 1962 was Byron Thomas, Brian Jones, David Watkins, Bob Prosser, Brian Price, Bryn Meredith and Glynn Davidge.

Wales picked Bryn Meredith (4) – twice as captain and he set a record 34 appearances for a forward, Brian Price (2), Glynn Davidge (1), Des Greenslade (1). Bryn Meredith was picked for the British Lions tour to South Africa and Glynn Davidge picked as reserve. He finally made the team as a replacement but was injured during the tour.