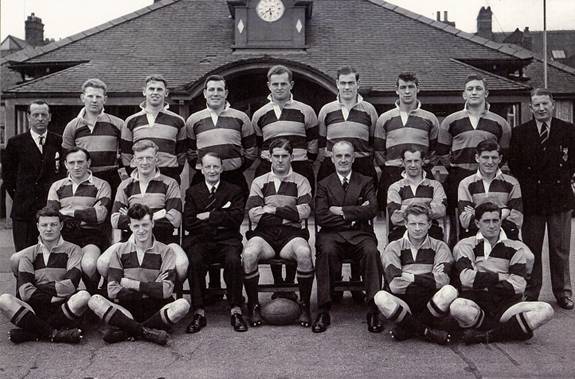 Malcolm Thomas was honoured with the captaincy for the third successive season but it was to be his least successful season. There were 10 defeats for only the 2nd time since the War – the previous time was 1953/4 when 14 games were lost. It was not unexpected with the club losing the services of several key players. Bryn Meredith was teaching at St Albans and decided to play for London Welsh. Garfield Owen, who only played 1 game and was injured, turned professional with Halifax RL. After playing 21 games that great servant Doug Ackerman joined Ebbw Vale in Feb 1957 due to work commitments after 8 great seasons with Newport RFC.

Roy Burnett was not the player he was at outside-half but with John Lane effectively retired although he played 9 games. he was tried with great success on the left wing. However his place at out-side half was difficult to fill and Harry Morgan, Tom Baxter Wright, Malcolm Thomas and Welsh trialist Ray Cecil (ex-Abertillery) were tried there. Cecil played 11 games from February 1957 to April 1957 but then joined Huddersfield RL on turning professional. A further problem at half-back was the loss of form of scrum-half Colin Evans who was replaced by Brian Scrivens with Onllwyn Brace having joined Llanelly although he did play just the one match – in Newport’s 10-0 win at Cardiff on March 2nd 1957. Centre play was also not so good with Malcolm Thomas and Harry Morgan losing form although John Roblin continued to show promise.

The pack was the main strength of the side with an excellent front-row of Mervyn Hinnem (ex-Abertillery), Des Greenslade and John Phillips who was an outstanding hooker. Ian Ford and John Herrera were their usual very reliable selves and Brian Cresswell and Glynn Davidge were starting to impress in the back-row alongside Geoff Whitson.

A promising new-comer was Clive Lewis (wing). He scored 2 tries (and 1c) in his 5 games and was to prove to be a prolific try scorer in future seasons. Malcolm Early (centre) who had played well at Abertillery made his debut.

Newport won the Snelling Welsh 7’s at St Helens once more making it 3 wins and 1 runner-up in the 4 times that it had been held – beating Pontypridd, Newbridge, Neath and Abertlllery (11-8) in the final. The team was Ken Jones, Malcolm Thomas ©, Roy Burnett, Colin Evans, Glynn Davidge, John Phillips and Geoff Whitson. Newport lost their Unofficial Welsh Championship title to Ebbw Vale in spite of beating them home and away ! The 10 defeats came from Gloucester (2), Cardiff (2), Cambridge Uni, Bristol, Llanelly, Richmond, Leicester and Barbarians.