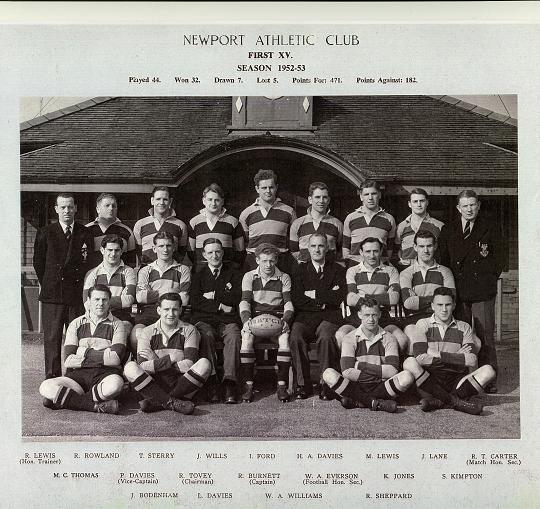 Roy Burnett, who had so ably stood in as caretaker captain in the two previous seasons was made captain in his own right for 1952/3. It was not going to be an easy season with some of the familiar faces retired. Ben Edwards – missed as a goal kicker – was one of these although he did play some seasons later for Ebbw Vale. LET Jones joined Abertillery. There was to be a certain amount of re-building of the side. Yet Newport developed once again into one of the best teams and finished as runners-up in the unofficial Welsh Championship. They would have been champions except for a surprise 6-11 (2t to 2t,1p) defeat at Newbridge in their last game off the season.

Once again half-backs Roy Burnett and Billy Williams laid the foundations and as always Burnett was a marked man but Williams’s great service helped him no end. Wings Ken Jones (18) and John Lane (23) did well and scored 40 tries (of a total of 110) between them but once again centre play was at times lacking. Malcolm Thomas did his best and during the season he got support from Bryn Williams, Dick Sheppard (also a flanker) and John Wills. Burnett (37), Billy Williams (35), Malcolm Thomas (34) and Ken Jones (33) were the most used backs with Dick Sheppard playing 33 games at centre / flanker. Sadly John Lane who had scored 23 tries in 25 games (including 5 at Plymouth Albion) broke his arm at Richmond otherwise he may well have set a new try scoring record.

The experienced and always reliable Peter Davies (vice-capt) helped shape some of the new forwards and the pack developed into a fine unit. Hooker Lyn Davies was outstanding – another player who surely should have won a cap. Ian Ford was establishing himself in the 2nd row. Newport welcomed Leighton Jenkins (2nd row / No 8) from Caerleon College – a future Newport captain and Wales international and hooker / prop John Phillips from Cardiff. John was another player never to win a cap even though he was Welsh reserve and incredible 20 times. Glynn Davidge, an 18yr old Wales Youth player, made his debut. He was to be become a Newport captain and play for Wales and British Lions and become arguably the one of the greatest ever No 8’s to play for Newport RFC. Peter Davies (40), Ian Ford (38), Lyn Davies (36), Jack Bodenham (34) led the appearances for the forwards. Goal kicking was shared between Malcolm Thomas, Peter Davies and full-back Malcolm Lewis later in the season.

Ken Jones, Malcolm Thomas and Billy Williams all played for Wales during the. It was not to be a dream debut as Wales lost 3-8 and Roy was never again picked for Wales. Gary Legge, son of former Newport full-back Walter made his debut and played 19 games before being replaced by Malcolm Lewis.