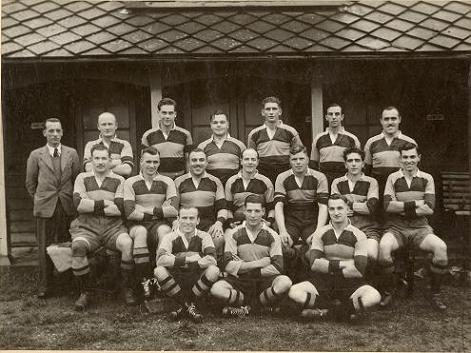 In 1945/6 Jim Hawkins continued his captaincy from the previous season and although 56 players were needed, the pattern of Newport rugby was being shaped and fashioned by the solid half-backs Alf Panting and Jim Hawkins and
the irrepressible but unpredictable centre play of Hedley Rowland. Hedley, whose insistence to concentrate on attack, had a profound influence on Newport’s style of attractive play. Several players who were to play a major part in Newport’s illustrious history appeared including R T (Bob) Evans who was to become one of the game’s finest wing forwards, John Gwilliam, who led Wales to two Triple Crowns, Jack Bale, a future captain and Peter Davies who was to be one of Newport’s strongest forwards over 9 seasons before going north. Experienced forwards Bunner Travers, Bill Jones and Ernie Coleman gave steadiness to the Newport pack and the pre-war Wales international wing-forward and 1938 British Lion Russell Taylor from Cross Keys played his part. The 538 pts scored reflected Newport’s style of play. Rowland was top scorer with 20 tries and 3 dg’s while scrum-half Jim Hawkins made the most appearances with 35 followed by 2nd row Tom Tamplin (one of 3 brothers to play for Newport) 32 and Russell Taylor 31. Wing WE (Billy) Williams, who played for Wales in a Victory International and who was to turn professional and go north the following season along with fullback Tuss Griffiths, scored 13 tries from 25 games and felllow wing BJR Simpson scored 7 tries from just 13 appearances. Centre Ross Johnson formed an excellent partnership with Rowland and contributed 12 tries and a dropped goal from his 28 appearances. Place kicking was shared mainly between Jim Hawkins (6 cg, 11pg), future Welsh trialist full-back D Ralph Morgan (9 pgs, 25 cg) and back row Peter Davies (5 pg, 9cg). Jim Hawkins also dropped 5 goals during the season.

Just 5 games were lost during the season – 2 to Cardiff who were also beaten twice in the usual 4 match encounter, and away matches at London Welsh, Neath and Cross Keys. There were many impressive wins – Racing Club, Paris and Barbarians were beaten at Rodney Parade and doubles were recorded against Bath, Bristol, Cardiff, Leicester, Llanelly, Newbridge and Swansea. The biggest wines were Nuneaton (H) 59-0, Bath (H) 34-0 and Llanelly (A) 29-12 while Newport’s biggest defeat was at Cardiff by 17-28.

Newport held the New Zealand Kiwis to a draw scoring a try to a penalty and seven Newport players – backs Tyssul Griffiths, Ross Johnson, Hedley Rowland, Billy Williams, Jim Hawkins and forwards (both later to win Welsh Caps) Ernie Coleman and RT Evans helped Monmouthshire to a sensational 15-0 win over the Kiwis at Pontypool Park with Rowland scoring a hat-trick and Hawkins dropping a goal.

From December 1945 until April 1946 Wales played 8 ‘Victory’ Internationals. There were a total of 40 players wearing the red jersey -16 in the backs and 24 in the forwards and of those, 19 went on to win full caps, though Newport’s Bunner Travers had been capped in pre-war internationals. Jack Bale, Tuss Griffiths, DH Steer, Frank E Morris, George Parsons, WE (Billy) Williams, Les Williams and Selby Davies all played in Victory Internationals but never won a full cap. WG (Bill) Jones played for Wales in 1947. RT (Bob) Evans did go on to win full caps.