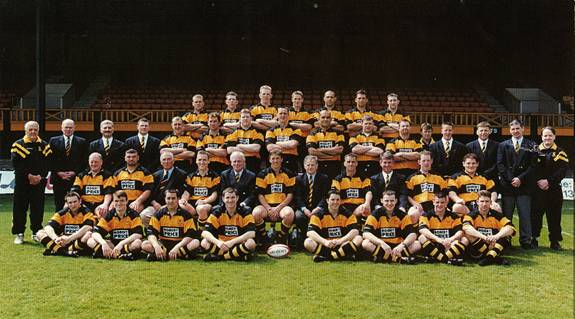 Newport were severely hampered with the loss of World Cup players at the beginning of the season but started off with a magnificent 18-13 win against Cardiff under acting captain Jason Forster in front of a near 10,000 crowd. It was a carnival atmosphere with multi-millionaire Chief Executive Tony Brown selling programmes. The hero was fullback Gareth Cull who kicked all 6 of his penalties. Unfortunately defeats at home followed to Neath and Pontypridd when Teichmann made his debut. Wins against Ebbw Vale and a rare win (first since 1977/8) at Stradey Park vs Llanelli were marred by a defeat at Swansea. It was very much up and down with a poor start to the European Shield with a defeat at Bedford with Teichmann being injured. Newport beat Castres at home but then lost away which ended their Shield hopes. A real low followed in February 2000 when coach Allan Lewis’ side under captain Shane Howarth turned in a truly inept performance at Eugene Cross Park to go down to Ebbw Vale 17-29. This was to prove to be the turning point for the whole season. Howarth and Smith switched positions fullback / outside half and Howarth handed the captaincy to Springbok legend Gary Teichmann. Newport then won a famous 22-13 WRU Cup victory over Cardiff at Rodney Parade. They did lose at Llanelli the eventual winners, but won every other game until the end of the season to finish as runners-up in the Welsh-Scottish Premier League behind Cardiff RFC- their highest ever position and in doing so qualified for the major Heineken European Cup competition for the following season. They scored 95 league tries beaten only by winners Cardiff with 102 and Llanelli with 96 who finished in 5th place. Shane Howarth was top scorer with 288pts (304pts in all matches). Top try scorers were wing Ben Breeze 17 and flanker Jason Forster with 13 tries. Forster led the appearances with 29 followed by that great stalwart and popular forward Gareth Taylor on 28 and Ben Breeze on 26. Gary Teichmann was probably player of the season followed by Simon Raiwalui and Jason Forster with young player of season Alix Popham. The best performance would have to be beating Cardiff in the cup after a dreadful performance at Ebbw Vale in the league. The biggest win of the season was 76-17 vs Dunvant (H) while the biggest defeat was at Sardis Road to Pontypridd 7-25. Try of the season was Jon Pritchard’s vs Dunvant when the move went the entire length of the field.
So the curtain fell on a high note at Rodney Parade in May 2000 with 64-29 win vs Glasgow and 76-17 vs Dunvant. Had the giant finally awoken from its sleep to take itself back to the top of Welsh rugby? The only controversial note was the question of Shane Howarth’s Welsh qualifications. It would later come to light that his grandmother was not born in Cardiff after all.