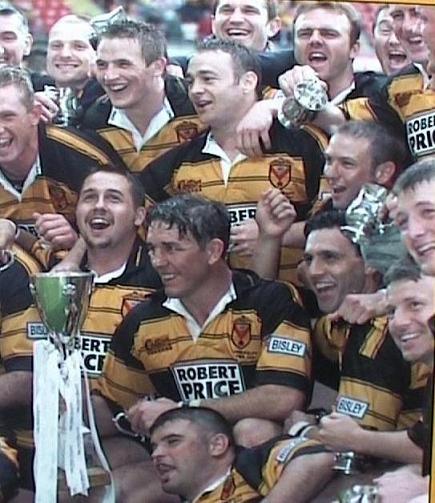 2000-1 saw Springbok legend Gary Teichmann continue as captain. Among the new players this season were Springbok prop Adrian Garvey, former Newport lock Ian Gough (Pontypridd), flanker Peter Buxton (Moseley) who had been a rep vs College Rovers in Durban May 2000, hooker James Richards (Bedford), high scoring Irish wing Matt Mostyn (Galwegians), utility back Emyr Lewis (UWIC -son of coach Allan), scrum-half Darren Edwards (Saracens) and ex- Italy / Australia fullback Matt Pini (Roma). Justin Thomas, Mark Workman, Andrew Gibbs and Gary Hicks left and joined other clubs. Franco Smith returned to South Africa and hooker Damien Cummins returned to Australia.
Performance in the Welsh Scottish League was disappointing. In September Newport lost at Llanelli and Cardiff but had good wins against Neath, Swansea, Ebbw Vale and Bridgend as well as a rare win at Pontypridd 44-22. By the end of the year Newport had also beaten Cross Keys, Llanelli, Edinburgh and Ebbw Vale but had suffered a further two defeats at Cardiff and at Edinburgh. The New Year saw wins against Pontypridd, Bridgend, Caerphilly (twice) and Cross Keys but defeats at Swansea and two at the hands of Glasgow Caledonians meant Newport finished 4th in the WSL compared to runners-up the previous season.
Newport made their first ever appearance in the Heineken European Cup. They went to Munster full of hope but never recovered from a slow start. They then met Bath, former holders of the European Cup at Rodney Parade, and a agnificent performance in front of a capacity crowd of just under 11,000 gave them a 38-10 win and kept their hopes alive. A last minute penalty by outside half Shane Howarth just held off Castres 21-20. However the return match in France was lost. Defeat at home to Munster in a match that they should have won finished Newport’s European Cup hopes.
In the Welsh Principality Cup Newport had comfortable wins over UWIC, Aberavon and Dunvant to meet Ebbw Vale
in the S/F. After a tough fight they won 19-12 to play their 4th ever final where they met Neath at the Millennium
Stadium, Cardiff. On the Saturday 72,500 watched Liverpool win the FA Cup while this time on the Sunday approx
20,000 watched the final of which some 12,000 were Newport supporters. In a tense final Newport under the inspired leadership of Gary Teichmann got home 13-8 thanks to a try by prop Adrian Garvey and 1c, 1p and 1dg by outside half Shane Howarth for their first trophy in 24 years. Howarth only just made the final due to a shoulder injury before the final. The team returned to Rodney Parade with the Cup and were greeted by a delirious 2,000 crowd who said one final farewell to the retiring Gary Teichmann. He led the crowd with a rendition of “Who let the dogs out?”. Lock Simon Raiwalui played in 31 of the 33 games and other leading appearances were Andy Marinos 30, Shane Howarth 29, Matt Mostyn 29, Rod Snow 29 and James Richards 29. Shane Howarth scored 411pts which had only been beaten by Paul Turner with 442 pts in 1986/7 although this included 74pts on a tour to Cyprus. Future Newport RFC captain flanker Gareth Gravell made his debut.
Leading try scorer was wing Matt Mostyn with 21 of which 5 were in the Principality Welsh Cup.

In the end the season could be described as one of highs and lows. The highs were the magnificemt Heineken European Cup win over past winners Bath in front of a packed Rodney Parade crowd on Friday Oct 13th 2000 and winning the Welsh Cup by beating Neath at the Millennium Stadium, Cardiff for the first time since 1977. Offset against this were some poor Welsh-Scottish League performances – beaten twice by Glasgow and Cardiff RFC and so slipped to 4th from the previous season’s 2nd spot. However a place in next season’s Heineken Cup was earned and Newport were now the best supported Welsh Club and one of the best supported in Europe. Shane Howarth was the first Newport player to pass 400 pts during a normal season ie excluding tour matches. Matt Mostyn’s try strike rate was impressive with 22 from 29 appearances and prop Rod Snow and lock Simon Raiwalui were the mainstays of the pack.

Ian Gough and Peter Rogers played for Wales and Rod Snow for Canada and Simon Raiwalui for Fiji.