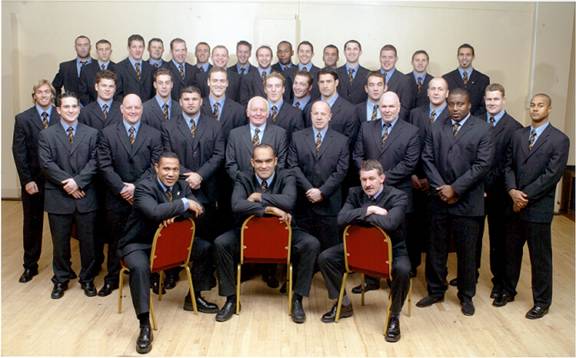 Simon Raiwalui continued as captain in 2002/3 under new coaches Leigh Jones and Richard Hill who had been successful at Ebbw Vale with limited resources. Darryl Jones was appointed Director of Rugby.

Alix Popham and Peter Buxton had joined other clubs and new players included Alex Cadwallader (Bristol), Matthew Veater (Blackwood), Andrew Wagstaff (Ebbw Vale), ex-England player Steve Ojomoh and Hong Kong international Luke Nabaro but the star signing was undoubtedly Springbok back Percy Montgomery. A disastrous start saw Newport lose their first 8 matches : 6 Celtic League and 2 Heineken European Cup matches – Edinburgh(A) and Toulouse (H). Newport finally won at home to Borders and Caerphilly in the Welsh League and against English Cup holders London Irish in the European Cup. A loss at London Irish which was popular fullback Matt Pini’s last match ended their Heineken Cup hopes. In the Principality Welsh Cup they had more success and reached their 5th final after a remarkable S/F against Bridgend atthe Millennium Stadium Cardiff. Fullback Montgomery kicked 9 out of 9 penalties to win the match 27-23. This was just a week after Bridgend had beaten Newport at Bridgend 56-30 in a WL match. In the final they were outclassed by Llanelli although Montgomery kept them in the game up to HT before losing 32-9.

There was a sad note at Rodney Parade on May 17th 2003 as fans watched Newport win their last home match against rivals Ebbw Vale 61-9 (biggest win of season) to finish 4th in the Welsh Premier League. Captain Simon Raiwalui brought the home season to an end when he converted Newport’s last try by Matt Mostyn. He had done the same for Sale vs waterloo some years previously and so kept his 100% record. Supporters knew then that things would never be the same again as the WRU had decided to set up regional sides for the following season. The Gwent side would essentially be a combined Newport and Ebbw Vale side eventually being called Newport Gwent Dragons and based at Rodney Parade after much political wrangling and involvement of the WRU. This meant that sides like Newport RFC would effectively be semi-professional sides playing in a Welsh Premier League and acting as feeder sides to the regional team. May 17th 2003 would be the last time for many fans – with only one match at Neath to follow – to see the likes of Simon Raiwalui (Joined Saracens), Shane Howarth (retired), Jason Jones-Hughes (Joined Munster), Jon Pritchard (Joined Rotherham), Matt Mostyn (Joined Connacht), Ofisa Tonu’u (who refused to play for the new regional Dragons team), Adrian Garvey (retired) and Mike Voyle (retired). What would season 2003/4 bring to the Welsh rugby scene? Only time would tell but on this wet May Saturday there was hardly a dry eye in the house as Raiwalui, Howarth and the rest of the team were saluted by the 6000 crowd on a wet Rodney Parade on a lap of honour. Railwalui was close to tears as were many hardened Newport RFC supporters as 128 years of tradition came to an end. Howarth and Raiwalui played as they had always done over their 4 years at Rodney Parade 100% effort. Newport’s so-called foreign legion had been attacked from all quarters in Wales but it has been through resentment from those who were unwilling or unable to see what these players have brought to the Welsh game. What hypocrites some of these people are as some of the so-called new regions have already signed a number of foreign players and in years to come the regions would be afloat with non- Welsh players and coaches. Ironically the new regional Dragons side would not be allowed to keep Simon Raiwalui due to a rule about the number of overseas players. For the record Simon Raiwalui, who rarely missed a match during his time at Rodney Parade led the appearances for the third consecutive season with 32 followed by Chris Anthony on 31 and James Richards on 28. Leading scorer was Percy Montgomery with 207pts from just 17 games while outside-half Jason Strange scored 199 pts from 26 appearances. Outstanding flanker Jason Forster scored 15 tries. 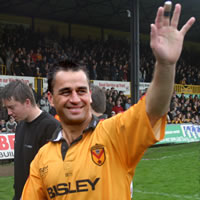