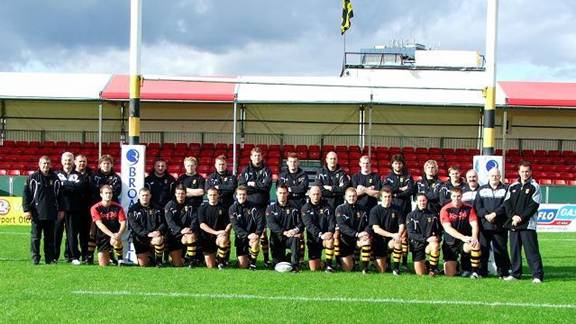 Centre / wing Rhys Shorney was elected captain for 2005/6 and Dai Rees and Sven Cronk continued as coaches although many questioned the wisdom of having a significant amount of Rees’ time involved with other coaching duties such as Wales U21, Wales 7’s and Dragons skills coach. This resulted in Rees not being available for a number of Newport’s matches and this together with injuries and player call ups for the regional Dragons side meant a difficult season for Newport RFC.

The main problem for Newport was scoring tries and taking advantage of the opportunities and possession created by the hard working forwards. Newport only scored 64 tries ( 58 league) in their 34 matches compared with 152 tries in the previous season and 150 tries in the Premier Championship side of 2003/4. There were some “highs” during the season but unfortunately there were more “lows”. Newport won their first 4 league matches against Glamorgan Wanderers, Swansea, Carmarthen Quins and Llandovery but came down with a bump with a 39-3 defeat at Aberavon which wasn’t helped with Newport giving away 27pts from 9 penalties. Then on Oct 8th 2005 Newport lost their proud home record which had stood for 39 games back to Feb 4th 2003 and in fact it was Newport’s first home defeat in the semi-professional Premier era. Newport continued to stutter through the season with highs of wins against Bridgend to take their 100% record, a record 6th consecutive win against old rivals Cardiff and an excellent win in the Welsh Cup at Aberavon and a near win at Neath which would have taken their unbeaten home record. These highs were balanced by lows of a home defeat by Pontypool when both sides had players sent off a further home defeat to Cross Keys and truly awful performances at Bedwas in the league and Maesteg in the Cup Q/F and also the league. However Newport did end on a reasonably high note winning 5 of their last 7 league matches including a last match of the season at Llanelli when they snatched 5th place in the league losing out on 4th place to Aberavon on try count. Newport recorded doubles over Glamorgan Wdrs, Carmarthen Quins, Llandovery, Cardiff and Llanelli. Top scorer was outside half Dan Griffiths who started the season at full-back with 304pts and in doing so became only the 6th player to pass 800 pts in their Newport RFC careers. Next highest scorer was Aled Thomas who scored 100 pts from his 15 appearances. Top try scorer was wing Gareth Chapman but both Thomas and Chapman’s appearances were limited due to playing a number of games for the regional Dragons side. Centre Richard Payne and prop Dai Pattison made 33 out of a possible 34 apps followed by lock Mark Workman (31) and Dan Griffiths (30). During the season 47 players were used with 17 making their debuts. Lock Mark Workman ended the season with a career record of 205 appearances.