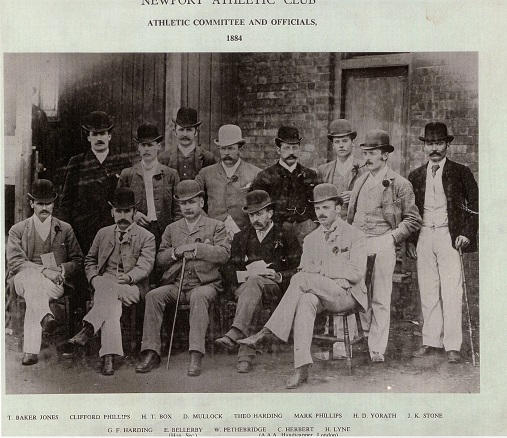 Newport only lost 2 matches in 1883/4 under new captain and Wales international Horace Lyne and 1 of those defeats was in the final – for the third consecutive year – of the South Wales Challenge Cup to Llanelly at Neath in front of a crowd of 5,000.They had in fact beaten twice already during the season – home and away. The other defeat was by a single try to Cardiff at home. Richard Mullock who had done so much for rugby including the founding of the Welsh Rugby Union, retired as Secretary. The Club made arrangements to extend the ground – John Butcher the groundsman suggested filling in the “Salt Pool” and reclaiming ground where rugby is still played today.

Arthur Gould played mainly as a three-quarter and new names included Owen Phillips, H McBean, Dr Moynan, Henry Jordan, F C Jones and Mapson Williams for a second season. Owen Phillips was a son of Thomas Phillips- the fourth brother to play for Newport. Tom Baker-Jones was a sound forward who played for Wales – his son Paul also later played for Newport and Wales. Theo Harding played at half-back and Bob Gould was a fine forward. Newport continued to experiment with the development of back play and on several occasions tried 10 forwards, 2 halves, 2 three-quarters and a fullback.