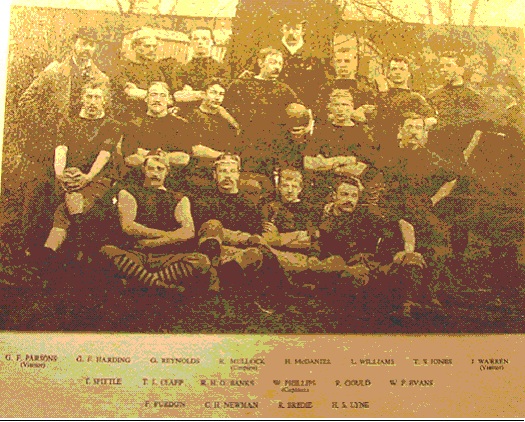 Newport had a good season in 1881/2 again under captain Will Phillips. The season also saw the end of his career while George Rosser ruptured his lung against Swansea and after a long illness retired. It was a big loss as Rosser had shown that he was a clever runner and probably the fastest three-quarters in Wales. Regular players included George Reynolds, Fred Phillips (brother of Walter Clifford and Will) – fine runner and three-quarter and ex-captain of Swindon. Newport still played 10 forwards in some matches – often with 2 backs, 1 three-quarter and two halves ie no full-back. In the second half of the season they reverted mainly to the orthodox 1 back, 3 three-quarters, 2 halves and 9 forwards.

This season saw a number of new teams on the fixture list and for the first time more than 20 matches were played :

Newport won the South Wales Challenge Cup beating Pontypridd, Pontypool, Cardiff and Llanelly (after a replay). In doing so they only conceded 1g to Cardiff and 1 try to Llanelly.

Bob Gould led the appearances on 21 scoring 6 tries, followed by J Bridie on 20 also scoring 6 tries and Will Phillips on 19. Leading try scorer was George Rosser with 12 from only 6 games. He played the first 6 games only and scored in each match with 2t (Worcester Artillery, 2t (Aberavon), 3t (Kidderminster), 2t (Swansea),1t (Neath) and 2t (Swansea) before being forced to retire